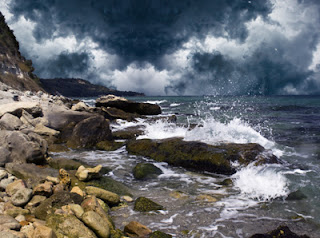 The fishwives stand in a line along the sea wall, their arms outstretched as if they’d hold back the tide. They wear near-identical clothing, choosing the drab colours of those who dwell in the Underground City. The only difference between them is within the lace motifs of their mud brown shawls, motifs which mirror the intricate cables of their clans.

An excited chatter begins, tearing along the line. Movement is sighted at the bottleneck into the bay – their husbands return. The sea boils and churns, waves parting to spit forth the menfolk. Their grey scales gleam in the fading light; fins and gills put the husbands halfway between fish and men. Webbed hands clutch treasures of the deep, and muscular arms throw the catch of the day to the fishwives.

Some women cram baskets with fish and crabs, others seize precious stones and assorted detritus, the spoils of many shipwrecks beyond the bay. Their hauls depleted, the men turn and dive beyond the waves. They flick powerful tails in goodbye as they return to the depths.

The fishwives load the baskets onto carts, and haul them towards the gaping tunnels at the foot of the cliffs. Bereft of their husbands but laden with bounty, they begin the slow trudge back towards the Underground City. Their goods will soon appear in the markets and junk shops, their pockets lined with copper.

This story is set in the same universe as my laryngitis-inspired tale, Vault of Lost Voices.