If you head to Hastings in Kent for the May Day celebrations, you may see a strange figure at the parade. Morris dancers ply their trade alongside a person wearing a huge decoration of leaves and branches. This person is known as the Jack-in-the-Green. But who or what is this unusual figure? 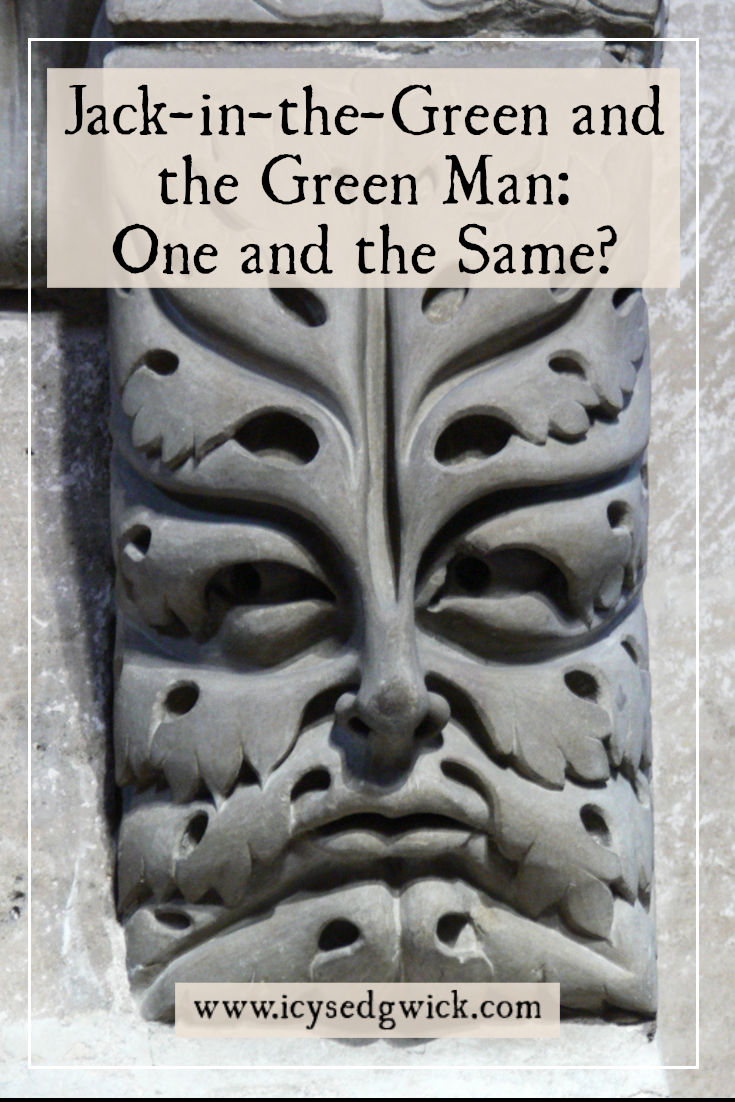 Does he represent an ancient force of nature? The spirit of the woods? And how is he connected to the mythical Green Man, found in churches all over England, also sometimes referred to as ‘Jack in the Green’?

The truth, as we shall see, is both complex and perhaps a little disappointing. But it’s a fascinating journey all the same!

Come with me now and we’ll meet the Jack-in-the-Green. We’ll also meet the Green Man. And we’ll see what happens when you try and put them in the same room…

Hit play to listen to the podcast episode or keep reading!

According to Russ Arno, we can trace the origins of the Jack-in-the-Green to the 16th and 17th centuries. At this point, English people started to mark summer’s onset by making garlands. Over time, these got more elaborate. Nearly every article you’ll read online will talk about the milkmaids and their increasingly complicated garlands for the May Day celebrations. They ended up in a sort of competition with the chimney sweeps. By the 18th century, “the chimney sweeps’ garlands became so big they covered the men entirely” (Arno 2020).

This is when the now-traditional design came in, of a wooden frame covered in foliage that the Jack wore over his upper half. The first documented mention of a Jack-in-the-Green comes from 1775. Over the next century, the sweeps took the Jack-in-the-Green tradition across the south of England. Jacqueline Simpson and Steve Roud note that this was a “highly regionalized custom” and that most appearances “cluster most thickly in London, Oxfordshire and Buckinghamshire” (2003: 197). This could explain why I’d never heard of it up here in Northumberland until a Fabulous Folklore listener requested the topic.

Now, the Victorians are often accused of inventing links back to a distant pagan past, such as the alleged link between the Roman festival of Lupercalia and St Valentine’s Day. In this case, we have to absolve them of such guilt. They actually sanitised the bawdy and often vulgar antics surrounding the Jack. Once he’d been tamed, he could “take its place in the pageants of the late Victorians and Edwardians” (Simpson 2003:197).

Victorian sensibilities weren’t the only factor in the decline of the Jack-in-the-Green. In 1875, the Chimney Sweepers Act passed through parliament. Small boys could no longer work up chimneys and sweeps needed to register with the police. This had a knock-on effect upon the Jack in the Green tradition, and by the 1900s, the custom had largely died out. A short article from 3 May 1904 in London Daily News insisted “there is no doubt that the spectacle of Jack in the Green is out of date in London streets, and that is mainly because London is too busy”.

Only you can’t keep a good folk tradition down. Towns like Knutsford, Brentham, and Oxford attempted to revive the custom. It wasn’t until 1976 that the people of Whitstable in Kent resurrected the tradition. Hastings following suit in 1983. Hastings is now famous for its annual May Day parade featuring the Jack-in-the-Green. For some, he represents an ancient nature god. For others, he’s a fun English quirk.

Still, there’s actually no reason to think he’s an old remnant of earlier pagan customs. Where does this link come from?

Simpson and Roud point out an even earlier usage of the term ‘Green Man’. They explain that during the Tudor era, men were employed to drive back crowds from the road to let processions pass through. These men, or ‘whifflers’, wore costumes – those covered in shaggy hair were Savage or Wild Men, while those covered in leaves were Green Men (2003: 154).

Brandon Centerwall also refers to this version of the Green Man, essentially a 16th-century form of crowd control (1997: 26). He explains how they’re even referred to in plays as early as 1594, so they predate the Jack-in-the-Green by quite some margin.

But are the Green Man whifflers and Jack-in-the-Green one and the same?

This is where we need to go back to the carved faces in churches we discussed earlier. You’ll have seen them in old churches, often in wood or stone. This version comes from Nell Latimer’s Commonplace Oracle deck, which I highly recommend if you enjoy using oracle cards.

Anyway. These carvings are actually referred to as foliate heads. They can be found all over churches from the Norman and Gothic period. The design first arrived in England from France in the 12th century as a form of ‘grotesque’.

These particular grotesques are called Romanesque in Europe, and Norman in England. Their European name derives from the fact they reflect the leaf masks found on late Roman art that represented gods or supernatural beings (Simpson 2003: 127).

The designs grew more varied and elaborate when the Norman style evolved into the Gothic. It should be noted that they had no singular title, and “it is most unlikely that they all conveyed the same meaning” (Simpson 2003: 127). Simpson and Roud point out that they may have once supported medieval sculpture, such as statues of saints. When the statue was removed during the Reformation, only the head survived, and “it assumed an independent importance its carver never intended” (2003: 127).

The Foliate Head Gets a New Name

In 1939, Lady Raglan wrote a piece for the Folklore journal in which she applied the phrase ‘Green Man’ to these foliate heads (1939: 45). She assumed the artists had simply recreated what they’d seen in everyday life. Rather than picking something more straightforward, she invented a tradition in which the Jack-in-the-Green took part in spring fertility rituals (1939: 54).

The lack of evidence to support this assumption has been ignored by everyone who now repeats as fact the ‘link’ between the foliate heads and a wilder pagan past (Simpson 2003: 127). It was Lady Raglan that made the erroneous connection between the Green Man and Jack-in-the-Green (1939: 50).

Witchcraft author Marian Green also describes Jack-in-the-Green as “an ancient traditional figure, […] a spirit of the Wild Wood and a younger son of Pan, God of the animal kingdom, although we usually see him as an old man” (1989: 31). For Green, Jack-in-the-Green and the Green Man in old churches are one and the same. Though here, she’s gone further and ascribed a whole background to Jack-in-the-Green that isn’t present in the chimney sweeps’ original attempts to outdo the milkmaids.

I don’t think she’s done this by accident. In 1967, R. O. M. and H. M. Carter wrote an article in Folklore in which they designated a type of the foliate head as a “jack in the green”. This refers to “a human face, generally young, seldom or never grotesque, peeping out from surrounding foliage” (1967: 269). We can see a link between this description and the chimney sweep peering out of his huge cage of leaves, but there the similarity ends.

And they’re not the only one exploring these ideas. An article in the Hull Daily Mail from 1899 summarises a lecture at Newcastle’s Lit & Phil by a “Mr. A. F. Ferguson” about the Jack-in-the-Green. The article raises the spectre of sympathetic magic and animism, explaining that “when a tree was cut down, the spirit of the tree was supposed to be offended, and something had to be provided for it to go into” (1899: 4). Here, the Jack-in-the-Green becomes that alternative home for the tree’s spirit – not part of a May Day celebration. The Jack becomes “the god of cultivation” (1899: 4).

So who is the Green Man, if he’s not Jack-in-the-Green?

Brandon Centerwall argues that the term ‘Green Man’ is correct and that ‘whifflers’ were supposed to represent these leafy heads (1997: 30). The whifflers were essentially dressing up as the foliate heads. Following this logic, Lady Raglan was right to call the heads the Green Man – but not for the reasons she gave.

Let’s turn back to Jack-in-the-Green for a moment though. It’s hard to see how an annual competition between milkmaids and chimney sweeps turned into a god of cultivation.

However, there is more in common between them than we might think.

The Victorians toned down the Jack-in-the-Green due to his over-the-top behaviour. Yet Centerwall also notes the antics of the whiffler which “suggested bacchanalian revelry” (1997: 32). While the Jack-in-the-Green did not directly represent the Green Man, perhaps they both descend from a similar human impulse to enjoy a parade or two.

So I think we can agree that the Jack-in-the-Green should probably be separated from the Green Man. He becomes part of the May Day celebrations, so he does represent the start of summer.

But what about the Green Man? Where does this leave him, if it leaves him anywhere at all? If Centerwall is right, then the Green Man whiffler was a version of the foliate head. It doesn’t mean the carvings represent the start of summer. Nor do they directly represent an ancient pagan god or younger son of Pan.

If we go back a little bit further to the origins of the foliate head, what do we find? Representations of Roman gods and nature spirits. We can’t say the foliate head was ever intended as a form of worship of these beings. Instead, the heads reflect popular fashions in medieval art – they’re decorative, rather than functional.

Trace their origins, and the heads represent Roman supernatural beings. So maybe the Green Man of the medieval pageant doesn’t actually represent an ancient nature god. But these foliate heads are at least a distant relative of the nature spirits beloved by the Romans. We can certainly enjoy and appreciate them for that!

What do you think of the Jack-in-the-Green and the Green Man? Let me know in the comments!

If you enjoyed this article, sign up below and get my guide to protecting your home with folklore!