There are few areas of human existence not touched by folklore and superstition. Unsurprisingly, burials and funerals come with a whole raft of beliefs and practices. Some of them persist to this day, while others, like sin-eaters, have largely died out. 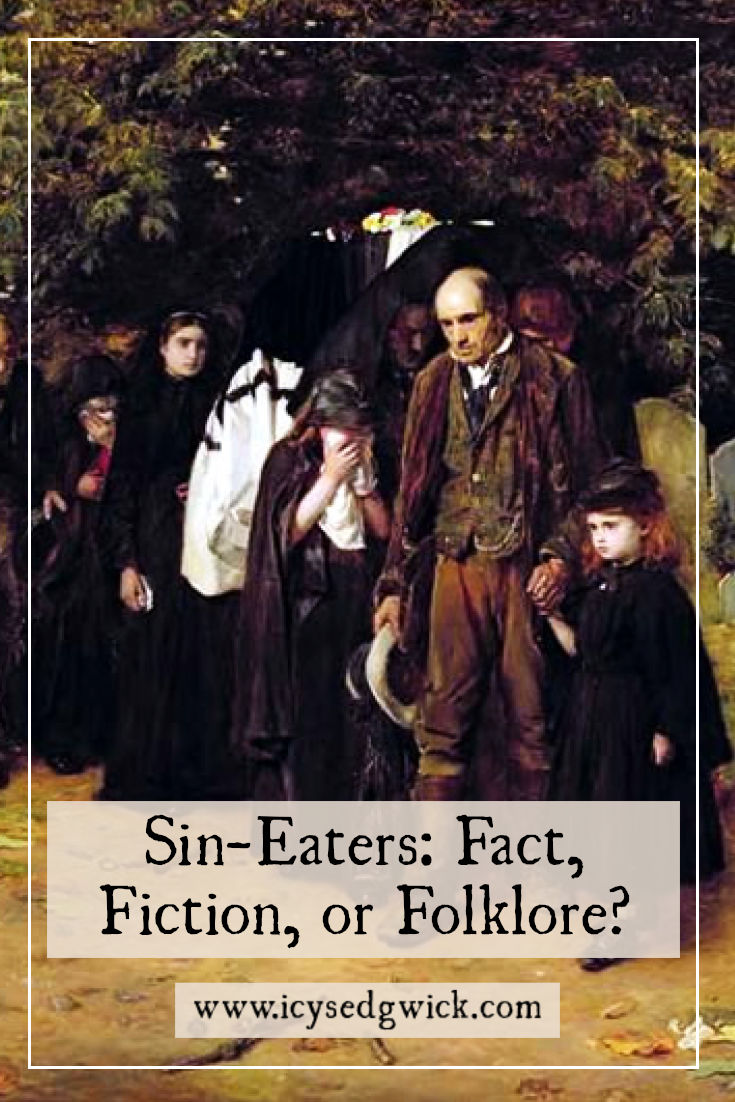 Despite the practice apparently lasting from the 17th to the early 20th century, there is surprisingly scant evidence of it. Instead, the sin-eater has crossed the reality barrier into fiction. He (because it’s nearly always a he) pops up in video games, TV shows, books, and films.

But who or what is a sin-eater? What does the practise involve? How did a person become a sin-eater in the first place?

Click play to listen to the podcast episode or keep reading to find out!

The practice was very simple. Mourners passed food over the body of the deceased. Sometimes they might place it on the corpse’s chest. Either way, it was believed to absorb the sins of the deceased.

Most accounts seem to agree bread was the favoured food. By eating it, the sin-eater took on that person’s sins.

They then continued to carry that person’s sins along with all the other ones they’d eaten. I’m not entirely sure what would happen if another sin-eater then ate theirs…

The practise seems to have begun in the 17th century, with the first records appearing in the late 1680s. Most common in Wales and the English counties that border Wales, it lasted into the early 20th century.

Writing in the 1680s, John Aubrey wrote about a remainder of the custom in Oxfordshire: “where at the burial of every corps one cake and one flagon of Ale just after the interrment were brought to the minister in the Ch. porch” (1881: 24).

Aubrey also noted the practice in Herefordshire, where mourners would “hire poor people” to take on the sins of the deceased. They passed a loaf of bread and a bowl of beer over the corpse after it was brought out of the house. The sin-eater ate the bread and drank the beer to take on the dead person’s sins. This “freed him (or her) from walking after they were dead” (1881: 35).

Other Food and Drink

In the 1890s, a field collector of folklore recorded a transcription of a belief that drinking wine at a funeral meant you were taking away the dead person’s sins with every drop (Richardson 2001: 8). So it wasn’t just beer.

Ruth Richardson points out that wakes often involved food anyway. In medieval times, the rich gave food to the poor before a funeral. They did so to encourage the poor to pray for the dead person to speed their passage through Purgatory.

Richardson also notes the “confused relationship with the Sacrament” in the case of ritual eating beside a corpse (2001: 8). Ingrid Harris agrees, comparing this widely Protestant practice with the Catholic sacrament. She even asserts that some sin-eaters took confessions from the dying (2007: 82).

But was sin-eating a genuine practice?

This is where things become a tad awkward. Jane Aaron makes the point that Aubrey’s 1686 manuscript wasn’t published until 1881. Sin-eaters don’t pop up in literature until after this point (2015: 173). She does point to an 1836 collection, The Mountain Decameron, by London-born surgeon Joseph Downes (2015: 171).

Downes records a “supposedly true” tale by a traveller in Cardiganshire, in which he encountered a sin-eater (2015: 170). Yet Aaron treats this collection as a literary work, not one of factual encounters. On top of that, she notes there are surprisingly few references to sin-eaters before Aubrey’s work became known.

So where would Aubrey get the practice from if it wasn’t widely recorded?

For Aaron, Aubrey’s interest in Old Testament practices could have led him to misinterpret existing funeral rites (2015: 174). She gives a few examples of customs practised in Wales at funerals. Yet these pre-1881 publications don’t mention them in the context of sin-eating.

Was Aubrey wrong? Or was something else going on? Before we answer that, let’s look at why sin-eaters would be necessary in the first place.

Why was sin-eating so important?

Why were people so keen to get rid of their sins? I mean, I’m sure it might have occurred to them once or twice to just not commit any. But if you want to get to heaven, you needed as clean a soul as possible. That meant cleaning the muck of sins away.

Having someone take them on after you’d died freed your soul to pass into heaven more easily.

As with many rituals the sin eater had a specific prayer to recite while eating.

“I give easement and rest now to thee, dear man. Come not down the lanes or in our meadows. And for thy peace, I pawn my own soul. Amen.”

Yes, the sin-eater is ‘pawning their own soul’ to help the dead find peace. But look at that second sentence. ‘Come not down the lanes or in our meadows’. The families didn’t want their loved ones returning from the grave – which they might do if they didn’t get into heaven or lose the dead weight of their sins.

So why don’t sin-eaters appear in records very often?

Let’s go back to our earlier dilemma – the validity of Aubrey’s original work. Did he make sin-eaters up, or misinterpret an existing custom to fit his theory? Or is there another reason why they didn’t appear in the records very often?

Due to the religious climate of the day, only the Church could officially absolve anyone of sin. Sin-eating was actually illegal and carried the death penalty. Even employing a sin-eater could see you branded a heretic.

So it’s entirely possible that the rituals described that don’t overtly mention sin-eaters were tailored to suit the climate. Those involved knew what was going on but chose not to make it explicit.

This is certainly proposed by Jane Aaron, who goes one step further. She asserts that religious turmoil even explains why the custom seems to disappear between its supposed “pagan” origins and Aubrey’s time. Once the Church switched from Catholicism to Protestantism, people held onto sin-eating as a substitute for “death-bed confessions of sins” (2015: 176).

Despite the hazy nature of reports, Aaron does conclude Aubrey didn’t ‘invent’ sin-eating. He simply wrote at a time when it reappeared after a long absence. Given the apparent need for secrecy, I’m inclined to agree with her.

What kind of people became sin-eaters?

Put simply, mourners usually turned to the very poor. They’d provide the service for a few pennies and a free meal. In some areas, such as Monmouthshire in Wales, a professional sin-eater toured the funerals. Not especially popular, they provided a vital job. If you asked the believers, the sin-eaters became more evil every time they ate a sin.

Sin-eaters were ‘valued’ for their ability to keep the dead from coming back. But their local community usually shunned them. One superstition claimed that it was a bad omen to look a sin-eater in the eye.

Bernard Puckle notes that sin-eaters lived in remote places and cut themselves off from social contact (2009 [1926]). Villagers only sought them out after a death occurred. They so hated the sin-eaters that they even burned any utensils they’d used to eat the food.

If you think the idea of buying a cleansed soul for your loved one is a bit icky, sin-eaters weren’t the only professionals paid for their services at funerals. Puckle points to the “wailers”, women hired to show emotional grief at funerals (2009 [1926]). They did so to make sure the dead didn’t misinterpret any emotional restraint and come back for vengeance.

Why did the practice of sin-eating die out?

The last known sin-eater died in 1906. Richard Munslow was actually a well-respected farmer in Shropshire. He took to sin-eating as an act of kindness to his neighbours, even though the practice had otherwise died out by the mid-19th century.

According to Marie Kreft, he lost four of his children, including three within the same week in 1870 (2016: 63). We’ll never know for sure why Munslow took to sin-eating. But Kreft speculates he did so to help his children into heaven (2016: 63).

Jane Aaron notes how the custom now largely appears in American folklore and literature. She speculates how familiar people are with its Welsh origins – or, indeed, how unfamiliar the Welsh themselves are with it (2015: 172).

Indeed, we can only speculate why the practice as a whole died out. Perhaps in a more secular age, the need to have sins ‘cleansed’ is less of a pressing issue. We have different interactions with the dead now since they’re usually cared for away from the home. (Check out Carla Valentine’s Past Mortems if you’re curious about what does happen to the dead).

But you can’t keep a good piece of folklore down.

Instead, the sin-eater has passed into popular culture. The late, great Heath Ledger starred in The Sin Eater in 2003. John Noble played a sin-eater in the Sleepy Hollow TV series. A whole raft of novels have ‘The Sin Eater’ in their title.

If popular culture is anything to go by, the sin-eater is here to stay…

Enjoy this post? Why not sign up below and get my guide to protecting your home with folklore?

Richardson, Ruth (2001), Death, Dissection and the Destitute: The Politics of the Corpse in Pre-Victorian Britain, London: Phoenix Press.