Whether you love to travel or not, there’s something about the idea of flying that can still provoke a frisson of fear. Air travel is somewhat unnatural, as you race through the sky with a hundred (or more) strangers at 35,000 ft in a metal tube. Superman was right, it is statistically the safest way to travel, but something about it can still seem…off.

Forms of air travel appear throughout history in both folklore and myth. Just look at the famed witch’s broomstick, or the magic carpet in One Thousand and One Nights. But in this post, we’re going to stick to the mechanical kind. 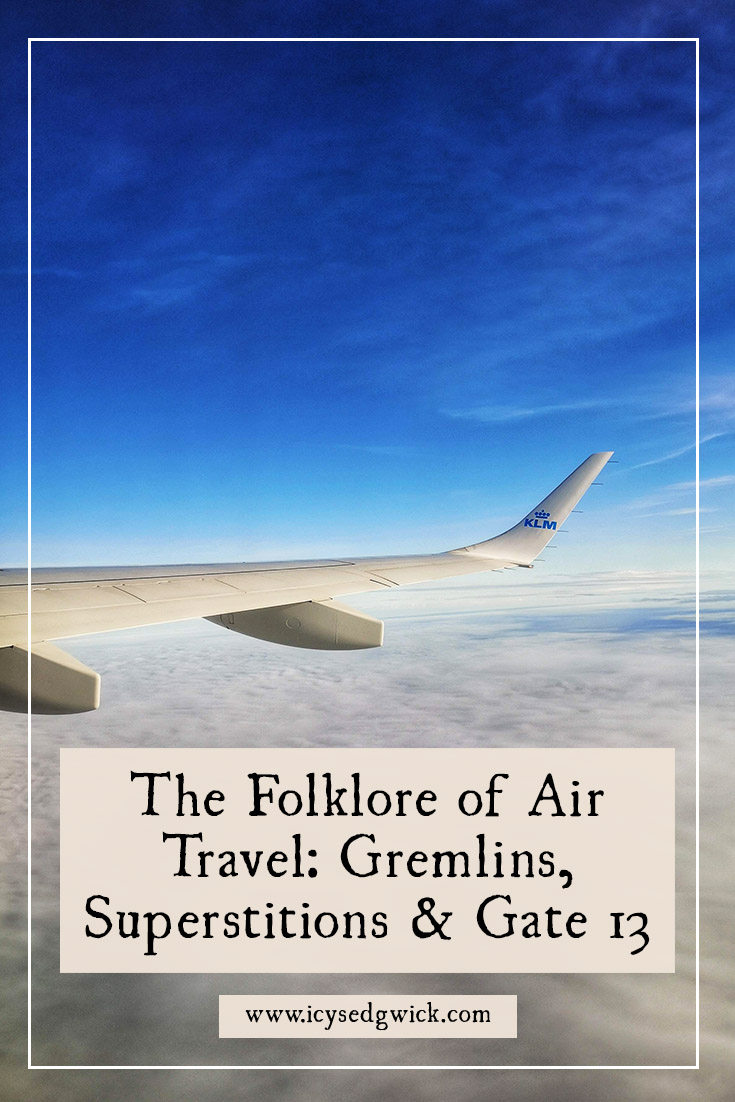 We’ll look at air travel as a form of transport, to examine good luck superstitions, personal flight rituals, and the critters most associated with aircraft—gremlins. Hit ‘play’ to hear the podcast episode of this post, or keep reading!

It seems airlines are just as superstitious as architects when it comes to their numbering strategies. Just as many buildings don’t have a floor marked ’13’, so some airlines skip a row ’13’ on board. As an example, KLM has a row 12 and 14, but no row 13 on board its planes. Italian airlines might also omit row 17, because 17 in Roman numerals is XVII. This is an anagram of vixi, the Latin word for ‘I have lived’ (Schiphol Newsroom 2020).

Many airports don’t have a 13th gate. While they claim it’s so they can renumber gates, it’s more likely down to superstition. After all, many people continue to fear the number 13.

Both American Airlines and Delta stopped using 191 as a flight number after various accidents involved the number (Abad-Santos 2013). Some airlines don’t use 911 or 666 in their flight numbers.

Touching the outside of an aeroplane before boarding is a popular superstition. Others clap when planes land.

Sometimes people look for babies on their plane, due to the belief that a plane “full of babies won’t crash because that’d be just cruel” (Abad-Santos 2013).

I actually asked the good people of Twitter and Instagram what ‘safe flight’ rituals they followed. Here’s what they replied…

“Drink a beer in an airport lounge before boarding. I started because I had time to kill one trip. Then it seemed to make my flights go better so I kept it up for good luck.”

“Kiss my palm, plant it on the fuselage as I board, mentally thank everybody who got the plane this far… [I asked why they did this, and they said] Somewhere between confidence and making my peace – my dad was a machinist on engines and my grandfather was fighter aircraft maintenance crew – planes are delicate machines created by fallible beings.”

“Clap on landing. And imagine there’s an escort of two fighter jets at takeoff and landing (started visualising them as a kid and never stopped for some reason).”

“I always sit in the window seat and order one Bloody Mary and make a collage out of the inflight magazine.
Crazy ritual but did it for decades. We moved to the Middle East when I was 13 and went to high school in Europe so I flew all over until 2011. I used up all my points.”

“Closing my eyes when the plane takes off.”

“Putting my feet flat on the floor and pushing slightly as the plane leaves the ground. It’s a comfort thing.”

“Always, always pat the plane on the door entrance when stepping onto a plane.. And say ‘fly us safe matey’..”

If you’re wondering if I have one, yes, yes I do. I started following the advice of John McClane’s fellow plane passenger at the start of Die Hard. So whenever I reach my final destination, I take off my shoes and socks and make fists with my toes. I think about doing that as I get on the plane!

Two of the superstitions I collected caught my eye since they both featured the same saint.

“I wear a small mother of pearl swallow that is carrying a St Christopher in its beak.”

“I always, ALWAYS wear my St. Christopher medal, even though I’m agnostic now and was raised Southern Baptist. It just gives me comfort as a charm, I guess.”

St. Christopher was the patron saint of travellers. In legend, he carried a small child across a swollen river, only discovering on the other side that the child was Christ. He makes an ideal figure to carry as a lucky amulet when travelling.

If you’re not keen on a saint, then try the Roman god Mercury or the Greek god Hermes. Both occupied the role of messenger god in their pantheon and acted as gods of travel.

The Jewish faith also has the Traveler’s Prayer or Wayfarer’s Prayer. You can read, and hear, it here.

Sometimes pilots have superstitions too. Some eat the same meal every time they fly. This is rooted in practicality since it can be a comfort food, helping to cut anxiety. It can also help to avoid sickness if they’re familiar with what they eat (Blye 2018). Pilots might also eat half of a meal and then eat the rest after the flight. This one comes from the Second World War when pilots would smoke half their cigarette before a flight, and the other half when they got back (Blye 2018).

Other pilots follow the same route to the airport. Again, repetition helps to provide the illusion of control. If you took a certain action and got a good result, then it’s easy to tell yourself that doing it again will get the same result. This completely ignores the influence of random chance, but it’s also a simple way to feel like you have some degree of control.

There are other beliefs, such as not taking a photo of the aeroplane before take-off. Second World War pilot Dave Toomey talked about a fellow pilot who wouldn’t let people take his photo before a flight. The one time he allowed someone to take his photograph, his plane was attacked and he barely made it back. After that, he never flew on the same day if anyone took a photo of him (Blye 2018).

It’s also important not to point at the sky. This is because apparently pointing at the sky can bring bad weather (Schiphol Newsroom 2020). I found this one interesting since it was considered bad luck to point at a star, since pointing is considered rude and might offend the stars. Does the sky feel the same way?

Pilots might also only mention the sun if the weather conditions are good, and their comments are a compliment (Blye 2018). That said, it’s considered a good luck sign to fly over a rainbow.

Other pilots never walk in front of their plane’s engine. Some think this is because they don’t want the engine to “see” them (Blye 2018).

In the Second World War, pilots would stick their chewing gum onto their plane’s wings. Some think this was their way of ‘tipping the scales of luck’ (Blye 2018). They would also have a lucky item of clothing. Scarves were a popular choice for this. These items were never washed because that would wash away the luck (Blye 2018).

Gremlins emerged in the First World War as imps or spirits that interfered with pilots and aircraft. Since they’re quite new to the world of folklore, no one had a definitive description of their appearance. Their appearances ranged from foot-high figures clad in red jackets and green trousers to six-inch high creatures wearing black suction boots (Sullenberger 1978: 62).

These creatures became a way to explain problems encountered during flying. One gremlin was even believed to have put the runways on hydraulic lifts so they could raise or lower them at will (Sullenberger 1978: 62). Their aim seemed to be making mischief, rather than outright destruction.

The contemporary image of a gremlin being a strange, elfin creature actually came from an advertising campaign. American Motors brought the imps into a television campaign for their Gremlin car (Sullenberger 1978: 61). Since people were less familiar with gremlins by the 1970s, they accepted this image relatively easily.

Gremlins themselves have also now evolved to explain any mechanical issue, whether it’s related to aviation or not. Some people have even referred to gremlins to explain the huge Facebook/WhatsApp/Instagram outage in 2021.

It’s an excellent example of the way in which folklore emerges to suit a new context, and evolves as that context also evolves and expands.

What do we make of these air travel superstitions?

As with many types of superstitions, these rituals and practices provide an illusion of control over air travel. If we’re not the pilot, we have no influence over the safety of our flight. If we are the pilot, we then have the added responsibility of getting 100 or more people to their destination in one piece. These superstitions, no matter how silly they sound, help to provide reassurance that everything will be okay.

If that superstition helps to combat anxiety or improve performance, thus making a safe trip more accessible to passengers and likely for pilots, then I’m not complaining! In many ways, these practices are a form of apotropaic magic—providing protection through the completion of an action, the wearing of a symbol, or the saying of a prayer.

There is a lot more to the folklore of air travel than I can go into here. We have tales of haunted planes, premonitions of disasters, and other strange phenomena. But I wanted to focus here on air travel as a form of transport, hence the emphasis on the things humans do to make flights feel safer.

Do you have any rituals you do before you fly? Let me know in the comments!