With the dawning of spring in the northern hemisphere, we’ve been looking at the folklore of insects. Bees and butterflies are finally out and about, doing their pollinating thing. And last week, we looked at a beloved garden critter, the ladybird. Turns out ladybirds are actually beetles, so this week – we’re looking at beetles in folklore! 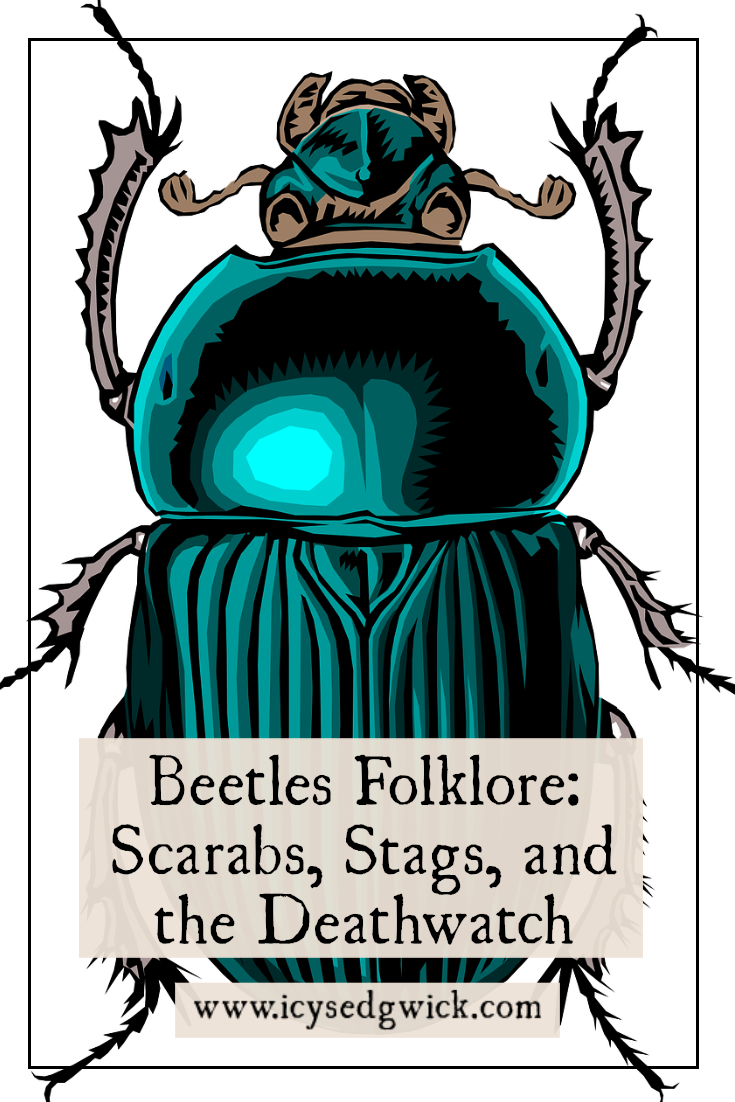 And the superstitions abound. Some believe a black beetle crossing your path meant you’d see rain the next day.

With thousands of species of beetle, I’ve had to narrow down the range we’ll look at. So we’ll explore the folklore of the scarab beetle, deathwatch beetles, and stag beetles.

As ever, hit play to hear the audio version of this post. Or keep reading if you prefer text format.

The scarab family currently contains over 30,000 species across the world. They’re often brightly coloured, with a metallic sheen to their bodies. Some scarabs eat plants, like the Japanese beetle.

Other scarabs are also notable for being great recyclers, eating whatever carrion, rotting plants, or dung they come across. It sounds gross, but it’s actually a pretty good way of keeping the planet clean.

Dung beetles were considered sacred in ancient Egypt. Egyptians believed Ra, the sun god, moved across the sky during the day. In the same way, dung beetles roll dung up into a ball. It makes their food portable and gives them somewhere to lay their eggs.

Because the larvae hatched out of dung, people saw the scarab as a symbol of regeneration. When Ra took the form of the rising sun, he became the god Khepri. Here, he rolled the sun across the sky. At sunset, he carried it through the underworld, before reappearing at dawn the next day.

As a result, the scarab often represents life cycles, new beginnings, or creation. People also thought that the scarab only had a male gender. Being able to reproduce using just a dung ball seemed miraculous. Because Khepri created himself out of nothing, so he was linked with the scarab.

Scarabs appear as amulets, decorating seals and rings, as far back as the 6th Dynasty. Amenhotep III used a range of large scarabs to celebrate events in his reign. And from 1795 BC, you start seeing winged scarabs of blue faience as funerary amulets. There is a possibility the scarab amulets were there to “drive away evil spirits” (Cowan 1865).

The scarab placed over the heart of the mummy often had Chapter 30B of the Egyptian Book of the Dead inscribed on it. This spell made sure the heart didn’t confess all of your sins when it was weighed against the Feather of Truth. If your heart was found to be ‘heavy’, then the Destroyer ate it and consigned your soul to oblivion.

Let’s move away from Egypt for a second

But they’re not just important in ancient Egypt. Dung beetles were also called Thor’s bug in Gothland. If you found one stuck on its back and righted it, you’d purge yourself of sin (Cowan 1865).

Deathwatch beetles have an absolutely brilliant name. They sound like they should be full of folklore!

Their name comes from the tapping sound they make in old rafters. They bore a hole into wood and bang their head against the inside of the hole. They make this noise to find a mate. (Still sounds better than Tinder)

Because people in days gone by held vigils at the bedside of the dead or dying, the ticking became synonymous with death. Since another word for ‘vigil’ is ‘watch’, hence we get ‘deathwatch’. As a result, some people think the beetle became a death omen.

In Lancashire, it spelled death if the beetle only tapped three times. Some people thought the ticking was that of time itself – specifically how much the dying person had left. Others thought it was the grim reaper tapping his fingers while he waited.

Some think this concept even inspired Edgar Allan Poe in his 1843 short story, ‘The Tell-Tale Heart’. (I actually discuss this story in my co-authored book, Gothic Dissections in Film and Literature: The Body in Parts! aff link) John E. Reilly drew a parallel between the apparent ticking of the dead man’s heart and the sound of the deathwatch beetle (Robinson 1971).

John Keats even mentioned ‘the death-watch tick’ in his 1818 poem, ‘Endymion’. And it pops up again in The Adventures of Tom Sawyer by Mark Twain in 1876.

As you might imagine, people associated the stag beetle with the devil. After all, they both have horns, right? Some people believed they used their antlers to carry burning coals. In Germany, people believed they caused fires by carrying these coals into houses (Cowan 1865).

In the New Forest, people called the stag beetle the Devil’s Imp. Many thought it arrived to ruin the corn harvest. People would stone the beetles when they saw them (Cowan 1865).

Evidence suggests this was the beetle Pliny meant in some of his writing. A particularly weird belief was that hanging a stag beetle around a child’s neck could protect them against a range of maladies. Pliny recommended these beetles to ward off ague or tendon problems. It even helped children “to retain their urine” (Cowan 1865), which presumably meant it would stop them wetting the bed.

It wasn’t all bad for the stag beetle. In northern France, carrying a stag beetle could bring you wealth. And a Romanian belief said you should wear the horns of the stag beetle to ward off the evil eye. This is something common to folklore, that we saw with dragonfly folklore. Something that’s seen as bad in one country can be positive in another!

So there you have it!

We’ve got scarab beetles rolling the sun across the sky. Or deathwatch beetles letting you know when your time is almost up. And stag beetles carrying burning coals or warding off illness.

I wonder if John, Paul, George and Ringo knew all of this when they chose their band name?

If you enjoyed this post, why not hit the button and become a Patron of Fabulous Folklore?