Ever since television became the must-have gadget in every living room, cinemas have been trying to devise ways to bring audiences back into theatres. They’ve tried Cinemascope, 3D (several times), surround sound, and IMAX screens, always peddling the idea that cinema gives you “the experience”, something you can’t quite capture with television. Even watching a widescreen TV in full high-definition with surround sound speakers can’t quite match sitting in a darkened auditorium to enjoy a decent film (although at least you won’t have to sell a kidney to afford the popcorn).

That said, the cinema often focuses on the technology, promising bigger screens, better sound, or other gimmicks to give you an experience that’s difficult to replicate in a domestic environment. Given the explosion of high quality TV serials, with their high production values and big name stars, it can seem like the only card they have to play…or is it? 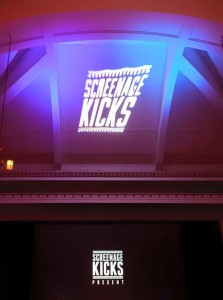 Based in the north east of England, Screenage Kicks are dedicated to the ‘pop up’ movement, specialising in small, one-off screenings in venues that suit the chosen film, featuring actors re-enacting key scenes and décor that reflects famous moments or props. Previous screenings have been The Big Lebowski (1998) at Lane 7, The Breakfast Club (1985) at the Boiler Shop Steamer, and a double-bill of Beetlejuice (1988) and The Lost Boys (1987) at the Tyne Theatre. Their last screening of 2014 was that of Batman (1989), with Newcastle’s Vermont Hotel pressed into service as Wayne Manor. ‘Alfred’ was on hand to welcome guests, while the Joker’s mob kept the audience in check. The masked ball vibe meant guests arrived as masked party goers, or masked villains and heroes from the DC canon.

Friday’s big event was The Shining (1980), shown in the Grand Ballroom at the Memorial Hall in Wallsend. The theme was that of a 1920s ball, to reflect the 1921 ball depicted in the film, and the setting could not have been more apt, since the hall itself was built in 1925 in memory of those who lost their lives during the First World War. Costume choices included characters from the film, murder victims, or ball-goers in their gladrags. Bathroom mirrors were daubed with the ominous ‘REDRUM’ from the film, while a map of the Overlook Hotel maze greeted guests in the ballroom itself. Everyone was handed the key to the infamous room 237, and a broken bathroom door was available as a photo opportunity. During the film itself, ‘Danny’ rode around the room on a tricycle, pursued by ‘Stanley Kubrick’ with a movie camera, while ‘Jack’ pursued ‘Wendy’ up the aisles, and conversed with ‘Floyd’ at the bar. 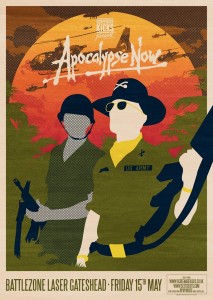 Part of the success of Screenage Kicks is their choice of film, but I think another reason they’ve been doing so well is that they offer something different. Newcastle upon Tyne is an infamous party city, but if you’re not interested in pub crawls or clubs, it can seem as though there is little to offer. Screenings such as these are a good alternative for those who want to enjoy a film – and have a laugh at the same time. The screenings feel like communal experiences, and they put the ‘performance’ back into cinema. The fancy dress theme is an added bonus, and because the screenings aren’t every week, there’s little time to get bored with the concept.

If you like the sound of Screenage Kicks, their next event is Apocalypse Now, on 15th May at Battlezone Laser in Gateshead. You can buy tickets here.