It’s fair to say I’m a big fan of tarot cards and all things divination. I got my first tarot deck aged 18, and over the years I’ve collected a range of decks. One of my favourites is the Commonplace Tarot by Nell Latimer. 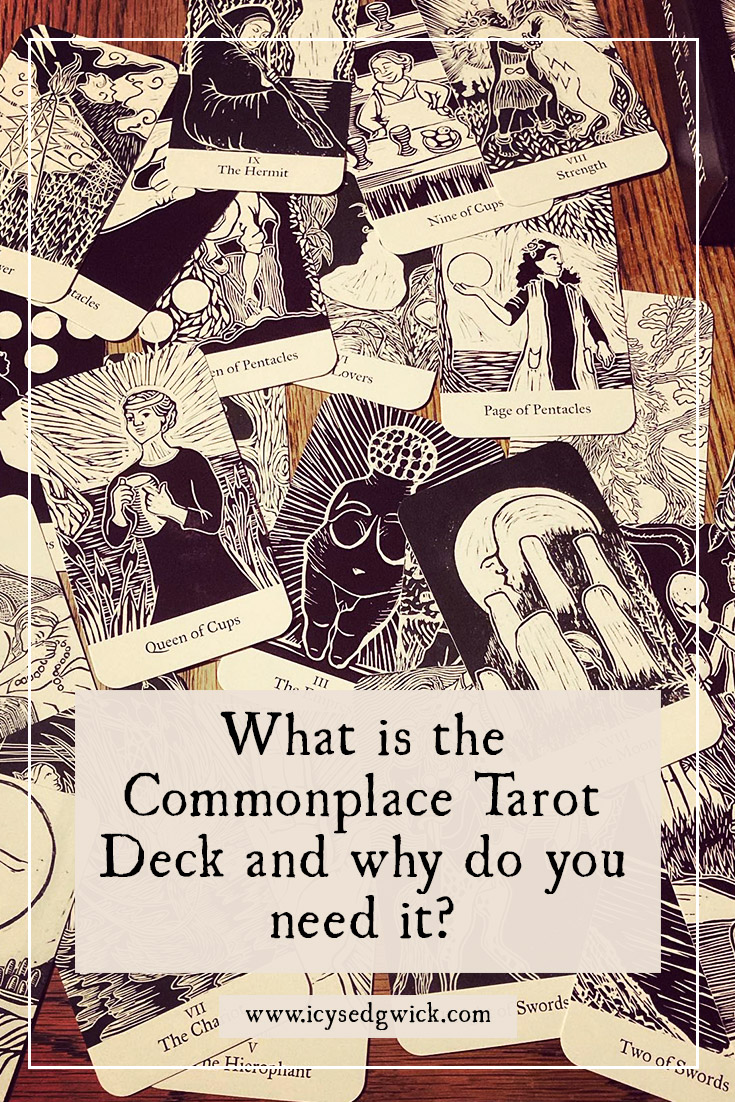 If you want to learn more about the history and folklore of the tarot cards, check out the tarot episode of Fabulous Folklore. They’re a fascinating way to gain new perspectives on challenging situations.

I supported the first edition of the Commonplace Tarot, and I am a big fan of the companion Commonplace Oracle deck. I’m also supporting the second edition on Kickstarter and wanted to help Nell reach more tarot lovers. I invited her over to the blog to tell us more about the deck and her artistic process!

So without any further ado, let’s get into the interview with Nell!

Tell us about the Commonplace Tarot. Where did it come from?

I’ve been using the Tarot on and off since I was about 10. A little later an aunt gave me a Marseilles deck and took it to Guide camp and rather freaked myself out at how accurate it could be. I’d convinced myself I was ‘making it up’ because I had not memorised the definitions and was just telling stories by looking at the pictures. Little did I know that’s kind of the point. And (perhaps unsurprisingly) the stories resonated with a bunch of teenagers in a tent in the middle of nowhere when the ghost tales waned.

I’d always been keen when it came to drawing so it made sense to think about pictures in a narrative way too—by my teens, I was keeping detailed sketchbooks and notes of everything from landscapes and portraits to my interest in myths, the lives of saints and the occult. That’s something I kept up throughout art school where I studied printmaking and later on, curating. I somehow drifted away from an actual art practice and ended up working with visual art in other ways, but the sketchbooks were never truly gone, but they were hidden and highly personal. In time they evolved into Commonplace books of writing and divination too—it seemed the most natural word to use for the deck for that reason.

I came back to making art about 2 years ago after a 20 year break. I joined a print studio. With the encouragement of good friends and my family, I set about creating the narrative structure of the Tarot as it was accessible in my mind. Alongside the Commonplace books it felt natural to make an oracle deck first and then a little later, a full 78 card Tarot deck.

How do you come up with the images for each card?

The structure of the Commonplace Tarot is skeletally influenced by the Rider-Waite-Smith (hereafter RWS) deck, as it’s the one I use the most and felt the most natural. Very quickly I saw that it was possible to incorporate my own imagery into that RWS architecture to create something new. I liked the idea of following a tradition or craft a little like an ikon maker as opposed to focusing on a conceptual premise which, in my working life in the contemporary art world I had spent most of my energy on in recent years.

I’m very easily distracted by so many forms of art. But I think deep down my strength lies in illustration. It was important on a visceral and physical level for me to draw—and an extension of that drawing process is relief printmaking for me. Specifically, linocut. I also wanted it to have the look of being printed too, to evoke earlier historical decks.

My research into folklore, magic and symbolism informed my work, as personal friendships and relationships plotted themselves quite naturally around the cards. I found out more from other sources what they might mean universally, and my understanding grew as I did more readings too. A big influence on me at this time was Carl Jung and his writings on symbols. I revisited well-thumbed books on magic from my teens by the likes of Francis X King and my favourite novel Wisechild by Monica Furlong, which beautifully described the symbiotic relationship a young witch had with the natural world as well as her community and teacher. I became fascinated by the history of the Tarot, how it originated as a game, and how it was originally made and evolved. I’ve included a bit of a bibliography below.

Sometimes the image comes clearly. Sometimes it may be inspired by another work of art, a piece of music, a resonance in a conversation with a friend. Some of the cards featuring people are portraits and sometimes they are snapshots into my daily life. There are several of my long-deceased ancestors in there! I wanted to include better representation too – people from different backgrounds, shapes and sizes and it was important to include people of colour. I have reflected my own connections with other cultures and locales—there’s a bit of Ghana, a bit of Europe and a whole heap of the British Midlands.

I remade a few of the cards for this new second edition, and the Eight of Pentacles this time is a self-portrait of me using the Columbia press at the print studio in Leicester. I wanted that to be part of the story. In the RWS deck, that card shows a craftsman at his bench, carving something and my equivalent is working at the press. Some of the other portraits people I know are transposed with figures from folklore—green men, woodwoses, mages and priestesses are all real people from my commonplace book.

What’s your favourite part of the process when making designs?

When I peel the first print proof away from the lino block. A satisfying sensory experience and it’s almost like the birth of that image. Maybe I have been watching too many ASMR videos…

There are lots of amazing decks available now. How do you recommend people choose a deck?

Be drawn to the images. Don’t wait to be bought one as some (as I understand, bogus) traditions dictate. Buy for yourself. Expensive doesn’t necessarily mean better. Feel connected to the messages and if that inkling or intrigue doesn’t take you then the deck perhaps isn’t for you. Don’t let others influence you. It’s an intuitive and personal decision. If you want the unicorns and pink sparkles—go for it and ignore your mate suggesting you need something with skulls and snakes on it to be effective or worse, cool.

I rediscovered Tarot in adulthood through a chance encounter with the brilliant Small Spells deck by Rachel Howe in 2016. It literally jumped out at me and I found myself reading it every day. I’m not really a collector of decks but every now and again one really communicates with me. The simplicity of the Small Spells deck, coupled with the quick and bold line drawings, made the deck seem so individual and unique. I hadn’t realised Tarot could be so personal before.

What misconceptions do you feel people still have about tarot?

That it has independent power. In my opinion it doesn’t. A Tarot deck is a tool and nothing more. The thing that makes it work is the relationship between the querent and the reader—the energy and focus from those two individuals interacting is where the interpretation can begin. To me, Tarot is like holding up a mirror. It often tells you things you already know deep down, and to a greater or lesser extent, it is possible to focus on the key elements which may form an enquiry or indicate a problem or areas that need some work.

The Tarot is not magic. But you are.

Do you have any favourite tarot cards, or ones you hate to get?

Not any more. They come to mean different things to me at different times. I go through phases where the Empress let’s say, appears to be guiding me. Through that, I develop a deeper understanding of that card. But I don’t really have favourites and have learned to understand the positive messages one can learn from a so-called ‘bad card’ like Death, The Tower or The Hanged Man. They’re helpful hints and prompts—a way of looking at something perhaps you were avoiding that really needs attention.

What I have come to enjoy most is understanding the context and relational aspects of a tarot spread—a card on its own can’t ever really be more than a snapshot. But together, even in a simple spread of past, present, future the interlocutors weave something new and the fact that there are endlessly possible combinations still really excites me.

You can get your Commonplace Tarot Deck by supporting the project on Kickstarter! Check out the trailer. How awesome does the deck look?

Get your copy of the Commonplace Tarot Deck: Second Edition by backing the Kickstarter! The deadline is December 31st so get supporting…

Chainey, D.D (2019) A Treasury of British Folklore. The National Trust.

A collection of writings and essays devoted to British folk horror and the themes that inspire it: folklore, myth, history, archaeology, psychogeography, witches, and the occult.