Few places in England conjure the concept of ‘wildness’ quite as well as Dartmoor. This national park boasts rocky outcrops, Stone Age remains, and more ghosts and legends than you can shake a stick at. Headless horsemen, black dogs, bottomless pools, and plenty of Devil-related shenanigans await on the moors. 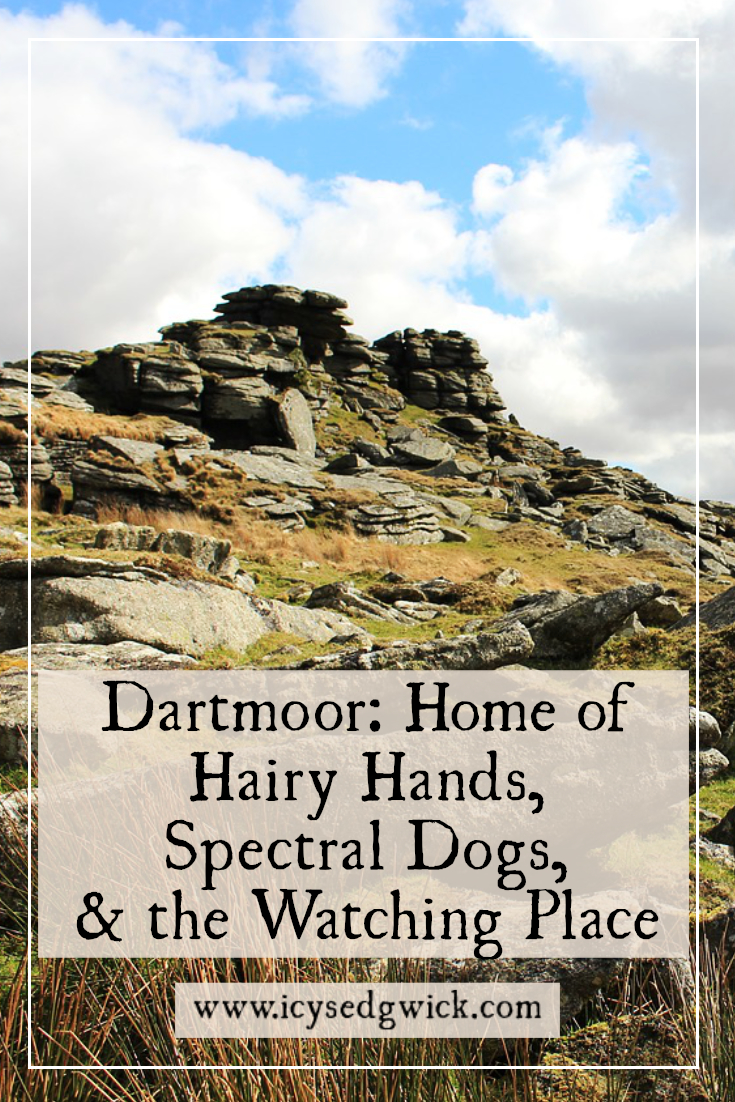 It’s hardly surprising that Sir Arthur Conan Doyle would choose to set The Hound of the Baskervilles in such a forbidding place.

But with so many stories in such a vast area, it’s difficult to narrow them down for a single blog post. We’re going to stick to stories found along the B3212 road to show the variety of legends found on the moors.

Hit ‘play’ to hear the podcast episode, or keep reading…

The Hairy Hands of Dartmoor

This is perhaps one of Dartmoor’s most famous stories and it involves a pair of spectral hairy hands. They apparently grip your steering wheel or handlebars and force you off the road and onto the moor. The stories cluster along a section of the B3212 road.

Someone defining themselves as ‘a lover of Dartmoor’ even wrote to the Western Times in 1928 after seeing notices either side of the road near Moretonhampstead. According to the letter, they read “Beware of death by the hairy hands” (1928: 8). The letter writer asked for more information about the hands.

1921 marks the first reported death, although sources vary as to when the incidents began. Some cite the early 1900s, others say 1910. But in June 1921, Dr E. H. Helby, a medical officer at Dartmoor Prison, was riding a motorbike with his children in a sidecar. As the only witnesses, the girls later explained how their father lost control of the motorbike and shouted for them to jump clear. They did so and he continued to wrestle the handlebars until his fatal crash.

An article in the Dundee Evening Telegraph claimed that there had been three incidents by October 1921, some four months after the initial death (1921: 6). The second incident involved a motorcyclist carrying a pillion passenger. This time, the passenger described a hand grab the handlebars before the bike became unwieldy.

A third incident involved an officer, who later “stated that he actually felt two large, muscular, hairy hands close over his own and force him into the side of the road, in spite of his resistance” (Dundee Evening Telegraph 1921: 6).

If that wasn’t enough, the hands widened their reach in 1924. A couple were camping north of Plymouth in a caravan. The woman woke during the night to see a large hand crawling up the window. Only making the sign of the cross caused the hand to vanish.

According to Tim Sandles, a visitor saw the hands pressed against the windscreen of her car in 1962. In 2008, a motorist reported seeing the hands grab his steering wheel (2016).

So what are the hands and who did they belong to?

The article in the Dundee Evening Telegraph cited Mr Gifford, “who is interested in psychic matters”, who explained that the hands would either by those of “an ‘elemental’, or natural spirit, or the earthbound spirit of some such person as a murderer” (1921: 6).

Chris Berglund gave a different theory, saying that a motorcyclist died on the road in the 1920s. In this version, the spectral rider takes control of the car to prevent accidents. This seems odd, considering the first accident seemed under the influence of the hands which caused it.

A post on the BBC’s local Devon website noted the area is “notorious” for accidents, with survivors citing the appearance of the hands. Yet they point out that among the locals, scepticism looms large. Apparently, “[m]any suggest it’s all down to ‘grockles’ trying to drive narrow, high walled roads far too fast” (2014).

Or is it the road itself? The B3212 lays claim to plenty of spectral or unusual stories either on it, or nearby. While the theory of ley lines has its problems, it does seem unusual that so many incidents would happen so close together.

Beyond the section favoured by the hands, the road passes Crockern Tor. This tor lies between Powder Mills and Two Bridges. Between 1305 and 1759, the Tinner’s Parliament held twice-yearly open-air meetings at the tor.

But they weren’t alone. A horseman riding a skeleton steed, known as ‘Old Crockern’, haunts the area. Sally and Chips Barber claim no one knows who he is or why he haunts the area (1990: 19). That said, Tim Sandles notes that Old Crockern is apparently “the ancient pagan God of Dartmoor”, and that you can see his profile in the rock formations.

This version of Old Crockern saw the ancient god intervene when a man moved to the moor from Manchester. Despite a warning from the god, the man tried to bend the moor to his new farming ways but nothing he tried worked. The would-be farmer ended up a broken man from his efforts.

So what of the skeleton steed? Sandles does mention this version, saying Old Crockern and his hellhounds pursue travellers crossing the moor on dark and stormy nights.

I can well believe Dartmoor having its own spirit, and we’ve talked before about the idea of the genius loci, or spirit of a place. It stands to reason that a mysterious and often unforgiving place like Dartmoor would have its own entity.

A phantom black dog haunts the B3212. According to a local legend, his master was murdered on the moor. Now this faithful pet haunts the road, still searching for the killer.

In the 19th century, a dog-loving traveller found the dog falling into step alongside him as he walked along the road. When he tried to pet the dog, his hand went straight through the animal. (Barber 1990: 16). According to Sally and Chips Barber, the man was struck by lightning! He survived, but no one is any the wiser about the whereabouts of the dog.

You can also find the Warren House Inn on the B3212. It used to stand on the other side of the road from its current position. According to Tim Sandles, the original inn dated to c. 1760 to help service the area’s booming tin mining industry. The newer inn dates to 1845 and an old tradition claims the fire in the hearth has burned continuously since that year.

A local legend speaks of a ‘murder’ in the inn. But it’s not a murder in the conventional sense. Two men got into an argument in the bar, apparently over money. One of them threatened the other. A few nights later, the aggressor secretly drew a chalk circle around the feet of his nemesis.

A short time later, the second man took ill and died. (Barber 1990: 22). Did his opponent kill him using witchcraft? I’d hazard a guess and say ‘no’. You generally draw circles to keep good things in and bad things out. But as this is Dartmoor, it’s anyone’s guess!

Incidentally, around a mile further north up the B3212 is a hollow where the road suddenly dips. People have reported a sudden sense of cold and fear on the spot. Even their pet dogs react badly. Cyclists have said they’ve felt their bikes become unstable, only recovering when they get back out of the dip.

You’ll also find a mysterious spot called the Watching Place where the B3212 meets the B3344 to Manaton. It’s even named on the road sign.

But who or what does the watching here?

There are several theories. In one, the local lord built a gallows at the edge of his land. Highwaymen made up the bulk of those condemned to the gallows, with many left hanging long after their death. Their friends and family watched their last moments in this place, hence the name (Barber 1990: 21).

Another tale also relates to highwaymen. But in this version, this was the spot where they watched for their prey (Barber 1990: 22). Tim Sandles even names this highwayman as John Fall, who patrolled the road from here to Bugshead Cross.

Sandles also relates a theory that the spot marked the edge of the parole boundary for Napoleonic prisoners held at Dartmoor Prison. Bounty hunters watched here to make sure prisoners didn’t overstep the boundary.

Sally and Chips Barber say animals often react strongly in this area, so perhaps someone is still watching? (1990: 22). But Sandles relates the tale of a spectral hand that reaches for the bridles of passing horses. Could this ghost be related to the Hairy Hands further along the road, grabbing bridles instead of handlebars?

Finally, we’ll end with a strange tale in Moretonhampstead. I’ve looked everywhere online but I can’t find any mention of it – it only appears in Dark and Dastardly Dartmoor. But I’ll relate it here in case anyone has heard more about it.

The B3212 passes through Moretonhampstead on the way to Exeter. A cottage once stood in the village, named Millbrook Cottage. The Milton family lived here during World War II.

The cottage passed from a state of disrepair into almost dereliction, and the family moved out. But something remained and strange things started happening at 9:15 pm.

In one incident, a figure walked through the snow in the garden. It left no footprints and disappeared. An invisible figure grabbed a man by the throat and knocked him to the ground. A small boy appeared to run through an open door but disappeared just as the clock struck 9:15 pm. (Barber 1990: 28).

Why 9:15 pm? Normally incidents happen during the witching hour. For so many incidents to happen at the same time, it implies something momentous occurred to ‘imprint’ on the atmosphere.

I can’t find many more details about this story, so if you know more, please comment below!

But that’s our whistle-stop tour along the B3212 across Dartmoor. I wouldn’t like to say it’s the road that’s haunted. Rather, having a main route across the moor makes it easier for more people to encounter the Dartmoor oddities. At least, that’s what we’ll tell ourselves…

Have you been to Dartmoor? Did anything weird happen?

I hope you enjoyed this post/podcast episode! If you did, why not support Fabulous Folklore for as little as $1 a month?