There’s something magical about seeing a dragonfly darting between the reeds on a spring day. With their jewel-like colours and ability to fly backward, they’re quite the aerial specialist.

The dragonfly is one of the oldest of the insect species. They also represent both air and water, since their larvae often hatch out of water. In many tales, they symbolise wisdom, communications from the elements, adaptation, insight, and transformations. 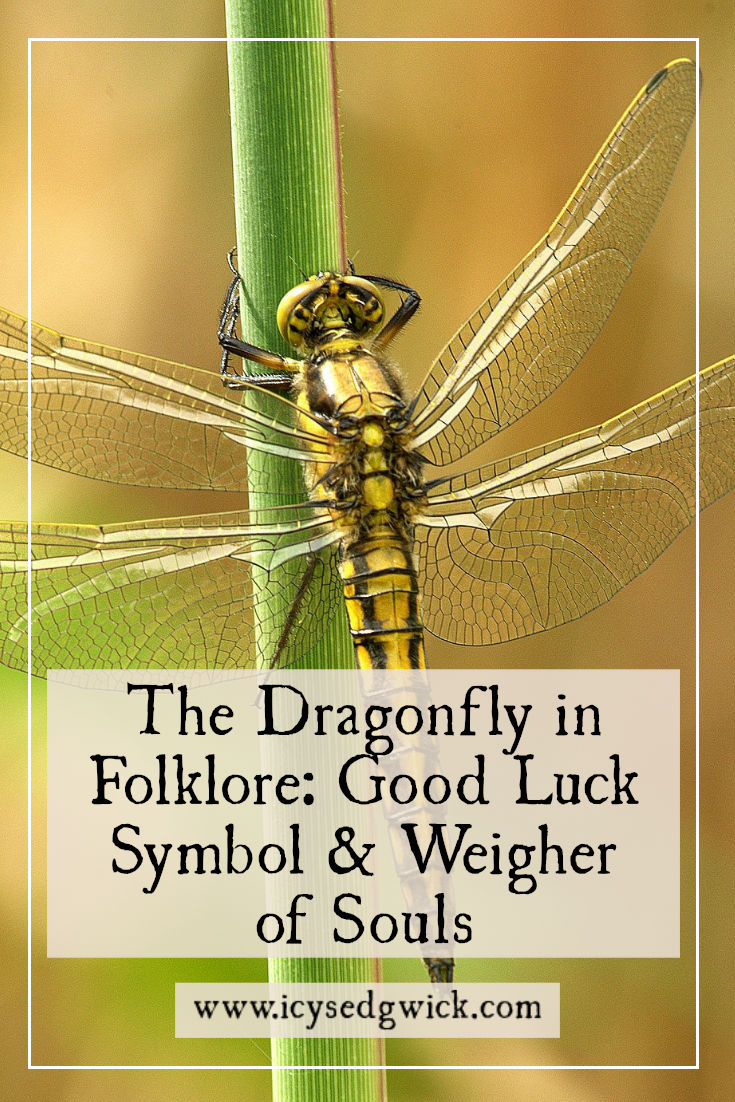 We previously looked at the link between butterflies and the soul. And we investigate the abundance of positive associations with bees. But, as we shall soon see, the dragonfly occupies a strange position in folklore.

Depending on where you are, it’s either a sign of something good or an evil omen! Keep reading to learn more about this fascinating insect, or hit play below to listen to the podcast episode.

We’ll start off with some basic superstitions about dragonflies before we look at regionally specific myths and legends.

Seeing swarms of dragonflies mean rain is on the way.

In some cultures, dragonflies represent good luck or prosperity. So make a wish when you see a dragonfly and it’ll come true.

Fishermen used them as an indicator of good fishing grounds. Plenty of dragonflies meant there were plenty of fish around. If a dragonfly hovered near the fisherman, he took it as a good luck sign.

In various spiritual pathways, the dragonfly acts as a messenger between the worlds. They teach those who see them to ‘go with the flow’. But seeing one in your dreams is a warning.

If a dragonfly lands on you, you’ll hear good news from someone you care about. Seeing a dead dragonfly means you’ll hear sad news.

And catching a dragonfly meant you’d marry within a year.

This is where the dragonfly gets interesting. There’s a very definite ‘Europe/Rest of the world’ split when it comes to the tales.

In Japan, dragonflies bring good fortune. The dragonfly often appears in haiku poetry, representing strength and happiness. The red dragonfly is thought of as sacred.

One name for Japan is ‘the Island of the Dragonfly’. That’s partly because its curved shape is believed to resemble a dragonfly at rest.

One of the reasons dragonflies are so beloved in Japan is due to a legend about the 21st emperor, Yuryaka Tenvo. While out hunting, an insect bit his arm. Some legends say it was a horsefly, others say it was a mosquito. Either way, a dragonfly appeared and ate the insect, rescuing the emperor from further harm.

I came across one story related to Bon, the Japanese Buddhist tradition involving the ancestors’ spirits. During this festival in mid-August, the spirits return to visit the living. Around the same time, thousands of dragonflies appear. It led to a belief that returning ancestral spirits rode the dragonflies like winged mounts. Others believed the dragonflies were the souls themselves.

During Bon, children aren’t allowed to bother dragonflies (catching them is normally a game). People welcome the insects into the home, allowing the ancestors to temporarily rejoin the family (Mitchell 2005: 33).

In China, they represent harmony, good luck, and prosperity. This might relate to the belief that the dragonfly is the soul of a dragon.

One Native American myth suggests that dragonflies were originally dragons. A coyote tricked a dragon into shapeshifting, and it couldn’t change back. As a result, the dragonfly symbolises change, speed, and illusion.

It makes a nice link with the Chinese association between dragons and dragonflies.

Dragonflies appear in Navajo sand paintings. Where images show them near water, they represent the water’s purity (Mitchell 21). They’re also common emblems in Navajo necklaces and on Zuni pottery.

Forrest Lee Mitchell and James Lasswell relate an American belief that seeing dragonflies predicted rainfall. If they flew high, it meant heavy rain. If they flew low, it would be a light rain shower (2005: 17). They also relate another nickname for dragonflies – that of ‘mosquitohawk’.

In addition, they relate a belief that a dragonfly landing on their fishing pole brought success while fishing. A further belief claims the colour of the dragonfly indicates what fish will bite! (2005: 17)

It wasn’t advisable to fall asleep outside in Iowa. People believed the dragonfly might sew together your fingers or toes.

The picture isn’t so rosy in Europe. Over 150 different folk names exist for dragonflies in Germany. These include Teufelsnadel (“Devil’s needle”), Wasserhexe (“Water witch”), and Teufelspferd (“Devil’s horse”). Nice. Some people believe the dragonfly came from Germany, while other tales think it came from Romania.

In the German origin story, a vicious princess rode around her kingdom with merry abandon. One day, she encountered a small man who tried to speak to her. She ordered him to get out of her way. He didn’t listen so she rode over him. The little man cursed her to always be joined to her horse. She and her horse became one, transformed into the dragonfly.

One of the Romanian tales has the Devil trying to cross a lake. A fisherman refuses to carry him in his boat, so the Devil adopts the form of a winged insect to fly across. He takes the form we now know as a dragonfly, and hence dragonflies exist.

In Europe, dragonflies often end up associated with the devil or black magic. Some of these negative associations do appear in American folklore, implying people took the beliefs with them when they emigrated to the New World. But the equal number of positive tales about dragonflies in America suggest an ability for people to create their own myths and beliefs.

In England, they’re often known as the “Devil’s darning needle” and “Horse stinger”. Meanwhile in South Wales, people called them gwas-y-neidr, or “adder’s servant” (Rowland 1929). I found two separate folk beliefs relating to dragonflies and snakes. In one, people spotted dragonflies sitting on the heads of snakes, as if they’d charmed the snakes into a trance. In the other, dragonflies follow snakes and stitch them up when they get injured.

One tiny bright spot of positivity in English folklore is that it was considered bad luck to kill a blue dragonfly. Which was difficult because it was also supposed to be good luck putting the wings of a blue dragonfly in a religious book like a missal.

In Sweden, dragonflies were an omen of tragedy or injury. Many believed they were on the lookout for bad souls. Having one hover near you meant it weighed your soul in judgment.

One particularly dark belief claimed dragonflies sewed shut the eyes of naughty children or liars (Learn About Nature). I wrote a short story inspired by this snippet, which you can get in your inbox by adding your email address below.

This particularly vicious aspect of the dragonfly is reflected in a belief from Kansas, that the dragonfly “may sew up the mouths of scolding women” (Mitchell 2005: 20).

Yet despite this dark association with the Devil, they’re connected to Freya in Norse mythology. She’s the goddess of love, war, and fertility. Some think they became her symbol because mating dragonflies form the shape of a heart.

But either way, the dragonfly is a useful ally to humanity.

While butterflies and bees pollinate our plants, dragonflies rid us of pests like mosquitoes and gnats. And considering mosquitoes carry diseases like malaria, perhaps we should consider it a symbol of good luck to see one of their predators near our home!

If you enjoyed this post, sign up below to get notifications of new posts when they go live. No spam or salesy stuff, just folklore. You’ll also get my free guide to home protection methods in folklore!