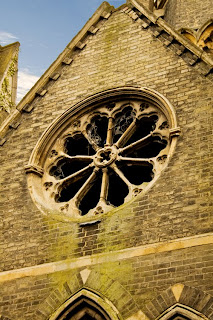 A small rock scuttled across the medieval stones. A fox looked up from his foraging near the gate. His amber eyes saw the Black Knight sitting on a low tomb. The knight kicked his feet against the faded inscription, and fiddled with his gauntlets. He cast his gaze around the lurching gravestones. He no longer saw the names; he knew each and every one of them. He knew their dates of birth, and their dates of death. He occasionally invented stories for them to keep himself amused.

Drunken chatter drifted across the still air. He looked up, but watched in dismay as the four shrill girls continued past the gate. The churchyard used to be a popular thoroughfare between two busy streets. An office block now blocked the way at the northern end, its car park butted up against the graveyard wall. The neglected church sat as if invisible while the city grew up around it, a medieval island in a sea of modernity.

The knight knew what it was to be forgotten. He hauled himself off the tomb to roam the small churchyard. Years of local building development altered the yard, changing its boundaries and disturbing graves. He hoped a developer might find his grave by accident. Caught in limbo, he was confined to the churchyard until he knew where his body was buried.

The Black Knight had guarded the churchyard for eight centuries. In earlier times, grave robbers, murderers, rapists, gangsters, and thieves all tried to ply their trade in his yard. The oath he swore to punish the evildoer held as much sway in death as it did in life. He consumed their souls and left their bodies as shambling walking corpses. His reputation even prevented crime as tales of clanking armour and dark shadows carried far and wide across the region.

Times changed. No one believed in ghosts or justice any more. He patrolled his abandoned corner of the city centre, forgotten and lonely. Not to mention hungry. What was it, forty, or fifty, years since his last meal? The sun rose and set, and still he wandered among the graves. The wind whistled through the dilapidated church, while weeds grew rampant. In his earlier years, he tried knocking on the coffins. He got no answer. Their occupants had already sailed across the Styx, but Charon would not take him. Without his body, he had no payment for the ferry.

Glass smashed near the gate. The knight looked up. A fat youth threw a second bottle over the wall. Green glass shattered against a moss-covered gravestone. The knight’s sacred duty to protect swelled in his chest as the youth pushed open the gate. The hinges squealed in protest. The youth staggered along the overgrown path. He lurched behind Mrs Martha Eddowes’ gravestone to relieve himself. The knight drew his sword.

The youth zipped up his trousers. He turned around to face the church. Only one window remained intact. The stained glass told the story of the Annunciation. The Black Knight guarded it with a possessive zealotry. Besides the church, that single window was the only thing on this ground older than him. Twelfth century glass, and still perfect.

The youth picked up a large stone. He tested the weight in his hand. The Black Knight growled. He didn’t like where this was going, but he could do nothing until the youth did something wrong.

The stone flew through the air, and crashed into the ancient window. The glass imploded inwards, raining down on the pitted stone floor inside. The Black Knight howled. The youth whirled around, startled by the sudden noise. He saw a black shadow, and heard metal sing as it split the air.

The youth’s body staggered backwards. The Black Knight stood tall and furious in the churchyard. He held his sword in one hand, the youth’s soul in the other. It writhed in his grasp, a roiling mass of deceit, violence and malice. The Black Knight took one last look at the gaping wound in the wall of the church. As the youth’s body stumbled toward the gate, the Knight sat down to devour the soul. Such a satisfying meal, but at such a price.

The image for this story is actually the abandoned chapel at the centre of Abney Park Cemetery in Stoke Newington, London, although the flash was inspired by the legend of the Black Knight, who is reputed to haunt the small churchyard attached to St Nicolas’ Cathedral in Newcastle upon Tyne. The St Nicolas churchyard is not overgrown and the Cathedral is one of the most beautiful ecclesiastical buildings in the country, but it suited the flash better that the church be neglected, so I’ve taken a bit of artistic license. I’m also not sure why the Knight is stuck in the churchyard, but this made the most sense to me. It is true that someone threw a brick through the oldest window in the Cathedral, though what happened to the hooligan is anybody’s guess…