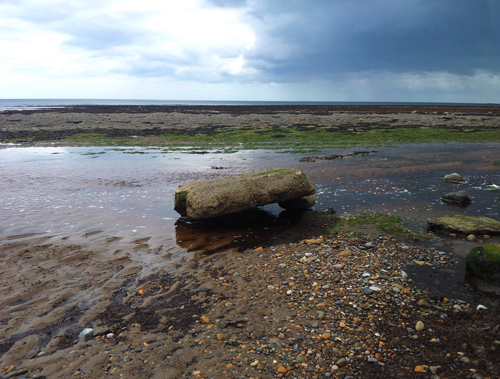 Nell crouched behind the old tree stump at the bottom of the sand dunes. A stone slab lay on the beach some ten yards away, its upper surface covered in seaweed that hung over the edges like a tablecloth. At the moment it rested on the sand, but the tide would come in soon, surrounding it with water. The slab would become an island. Nell often wondered what it would be like to live on an island, far away from the family she didn’t look like and who didn’t understand her. She wouldn’t have to do chores, or trudge here and there carrying things for Nana. She could play all day, and talk to the animals for company.

Nana’s voice drifted across the sand dunes and Nell frowned. Dinner would be a thin stew served alongside bread so hard Nell often mistook it for stone. Nana would alternate between eating and praying aloud, thanking God for his bounty, and asking if he could maybe lend a little grace to her errant granddaughter. Nell would spend her time studying Jack, and Nana, and her mute sister Grace, wondering at their lumpy features and dirty blonde hair, all the while twisting a lock of her copper hair around her finger.

Nell stood, and cast a final glance at the slab before heading home. She first discovered it when she was six and out helping her older brother look for food in the rock pools. Jack told her it was a faery table, and belonged to the little people who lived along the shore. They’d have dinner parties when the tide came in so their mermaid cousins could join them. Jack made it sound magical, but Nell related the story to Grace when they returned home. Nana flew into a rage, told her the table was dangerous, and forbade her to go near it again.

For ten years Nell had done as she was told, but now the pull of the slab was irresistible. She found hundreds of excuses to go to the beach, searching for firewood or crabs, and returning with baskets of moss from the rocks to help patch their roof. Yet she had still never been on the beach at sunset when the tide came in. Sunset was only minutes away, and water now lapped at the bottom of the rock.

Nana shouted her name again, impatience colouring her voice red. A flash of anger lit up the edges of Nell’s mind. Why should she come as if called like a dog? A few moments more wouldn’t hurt, and it certainly couldn’t ruin the stew.

Nell crept across the beach to the slab. Leaves lay around its edge, tiny cutlery flanking each one, with upturned shells balanced to act as cups. She counted thirteen places set for dinner.

Dancing lights appeared further down the beach. They winked in a dazzling array of colours, growing larger as they grew nearer. Excitement gripped Nell, and forced her back to her hiding place behind the stump. She no longer heard Nana calling her name, her ears only tuned to the laughter and song of the dancing lights.

Eight dancing lights arranged themselves around the slab, and as Nell concentrated, she saw limbs and bodies appear. Wings unfurled, and curls of hair cascaded down backs. She couldn’t make out faces, but she watched them unpack their baskets, setting food on the table. Nell didn’t recognise the smells, a rich combination of sweet and spicy, and she frowned to think of the burned or rancid smells of Nana’s kitchen.

The water rose as the sky turned first golden then red, and Nell found she could make out four heads out to sea. She thought they might be seals until they drew closer and she saw human features. Nell didn’t notice one of the lights at the table disappear, so intent was she on studying the incoming mermaids.

“There is a place spare!” cried one of the mermaids as she reached the table. Long black hair rippled down her back, and Nell realised her body was covered in scales up to her armpits. Gills opened and closed down either side of her neck.

“Indeed, for we are to welcome another of our number to our table!” replied one of the faeries. He had hair the colour of a stormy sky, and wore a suit of the deepest blue. Nell wondered what the fabric might feel like. Would it be rough and coarse like the tunic Nana made her wear, or soft and velvety like the coat of the vicar’s wife?

All of the party turned in her direction, and Nell felt the blood rush to her face. She crouched further down, hoping to disappear into the sand dunes themselves.

“We’ve already seen you.” A voice whispered in her ear, and Nell yelped.

“It’s alright! We’ve been expecting you.”

Nell looked up into the smiling face of a young woman. Brilliant blue wings shimmered behind her, and pointed ears poked out from her red hair.

She tried to stammer an apology but the faery took her by the hand and led her across the beach. Nell felt herself shrink, her legs becoming thinner and longer as her torso grew smaller, and two heavy buds appeared on her back, straining against the sackcloth of her tunic. Panic stole her voice, and she allowed herself to be guided to the empty seat beside the black-haired mermaid. The faery with the storm hair smiled at her.