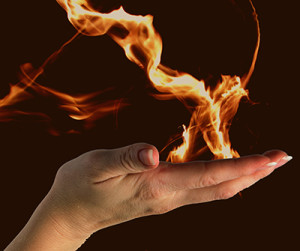 The man in the white coat found her. He saw only a girl on fire, not a young woman aflame with real potential. He ran for help, and she found herself locked in a tiled room. After an hour she recognised it as the shower room. Nothing combustible there.

She sang to herself as she huddled against the wall in the only dry spot on the floor. The music bounced around the room, its echoes adding harmonies to her own melody. Her simple song sounded like a chorus. She smiled, grateful for the company, if only from her own voice.

Men in black coats came into the room. They wore their hair short and their boots so polished she could see her face in the sheen on the leather. The nurses helped her to change into clothing she vaguely recognised from the time before the manor, and they waved to her as the car pulled away from the front door. She knew she would never see them again.

Neither of the men would talk to her in the car, and the shorter man twitched when she spoke to him. He rubbed his nose whenever he got nervous, and she made a game of it to pass the time. Eventually the man’s nose was red and angry, and the taller man told her, in a polite but firm tone, to stop talking. She made herself comfortable in the back seat and stared out of the window at the darkened countryside that slid by.

She’d fallen asleep by the time they reached the bunker, and the taller man lifted her out of the back seat as if she were a child. She woke up when they got inside, where the electric light burned brighter than the sun and shoes squeaked on the linoleum floor. She panicked, thinking she was back in the manor, until they introduced her to an older man in a tweed suit. His grey hair stuck up in tufts and he wore gold-rimmed spectacles on the end of his nose. He had a kind face and she decided she liked him.

She started at the sound of her name, a name she hadn’t been called since before the manor, a name her mother picked because she’d grown up in the Seventies.

“Yes, we know who you are. We were watching you until you were taken away. We lost sight of you for a while, it seems Dr Thompson didn’t want to give you up until he realised what you could do.”

“Who are you?” Farrah struggled to form the words but the man smiled.

“I’m Dr Phelps. I specialise in parapsychology, and you, my dear, have a rare gift. Popular culture refers to it as ‘pyrokinesis’.”

“Why am I here?” Farrah thought of the flames licking up her arm, the way they tickled her skin, and she shivered. The flames were her friends, and she was no lab rat.

“I want to help you to learn how to use your gift.”

“Because we are at war, Farrah. The world is filled with mad and dangerous men, and it is going to take a special young lady like yourself to bring them into line.”

A chill ran down Farrah’s spine as she realised Dr Phelps had stopped smiling.