Most people’s first introduction to griffins (also gryphon) might come via popular culture. Mine was via its appearance on the logo of the Midland Bank, and also as part of the Vauxhall car insignia. They’re a striking example of a mythological beast, more ferocious than unicorns but more approachable than dragons. 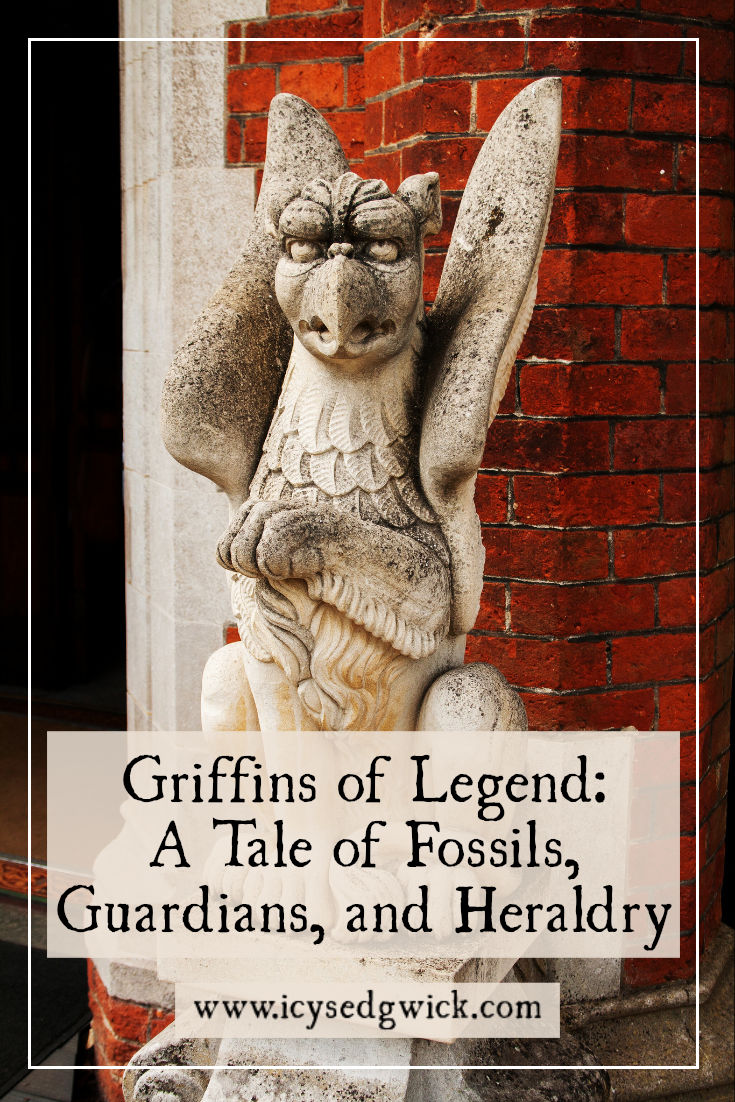 Typically, griffins are hybrid animals; part eagle and part lion. They usually have an eagle’s head, forelegs and wings, and a lion’s body, hind-legs, and tail. As eagles are the king of the birds, and lions are the king of the animals, this makes the griffin an especially regal creature.

Strangely, for a seemingly popular mythical creature, there are few specific myths about griffins. They appear to be more symbolic than functional. Many of the articles I consulted would say “they were believed to…” but then there aren’t any real stories where they do those things. For creatures believed to have the power of speech, we don’t have any myths that let them do so.

Instead, they appear as decoration, or within insignia. Griffins appear in medieval heraldry. As a symbol, the griffin represents ferocity, strength, speed, intelligence, vision – all the things also represented by eagles and lions.

But where did griffins come from, and why do they appeal to us so much? Let’s find out…

Where does the griffin come from?

There is also evidence of them in ancient Egypt. And we really should credit Asia as their likely source. Yet they’re most common in stories from ancient Greece. They appear in frescoes dating back to the 15 century BC in the Bronze Age Palace of Knossos on Crete. Griffins even flank the throne in the Throne Room, giving us an early glimpse into their protective role.

In early Greek art, they either pulled Apollo’s chariot or carried him up to his sun chariot. This association with the sun god Apollo explains their links with solar energy. In other depictions, they also pulled the chariot of Nemesis, goddess of retribution. Here, they were believed to both act as guardians and dispense justice. Others saw griffins as the hounds of Zeus.

That said, the first known written text about griffins only appeared in the seventh century BC (Mayor 1993: 41). They became popular in ancient Greece between 700 BC and 300 AD, yet little was added to their legend after the latter date (Mayor 1993: 41). Where people insert griffins into myths about Apollo or Zeus, they do so only by extrapolating stories from the art.

Adrienne Mayor and Michael Heaney raise the point that griffin mythology differs from classical Greek myths. In the Greek legends, heroes battle monsters that are clear hybrids of other species. Yet while the griffin appears in Greek art, it doesn’t actually interact with any of the heroes in the myths. Instead, it’s treated like a real animal from a distant land where it interacted with real people (Mayor 1993: 48).

The guardianship or protective role of the griffin starts in the legends that see griffins guarding treasure. People believed they guarded gold mines, though this association with gold could come from their solar links through Apollo.

In 77 AD, Pliny the Elder made the claim that griffins uncovered gold while making burrows (Mayor 1993: 42). A report in 200 AD by Aelian, a Roman compiler, describes the griffins’ ferocity towards humans as being a parental instinct. Rather than fighting humans over the gold in their nests, they fought humans to protect their chicks (Mayor 1993: 44). Yet this same report does refer to two different beliefs that griffins wove gold into their nests and that they actively guarded it. It just goes to show how easily different word-of-mouth sources can give rise to a wholly new yet unfounded belief.

So strong was the link between griffins and gold that in Book 3 of his Histories, Herodotus explained that the north of Europe boasted “the most gold”. A group of one-eyed men known as Arimaspians stole the gold from griffins (1920, chapter 116).

The Arimaspi lived in what is now the Ukraine, Turkmenistan, Kazakhstan, and Russia (Levinson). In the stories, they also used horses to attack griffins, which explains why in some depictions, griffins attack or kill horses. On the rare occasions that griffins and horses mated, their offspring were called the hippogryph. These creatures had the same fore-legs, wings, and eagle’s head as the griffins, but the bodies of horses.

Is there a realistic explanation for the griffin?

Surprisingly yes – sort of. The theory doesn’t explain that griffins were real, but rather how people may have thought they were.

Mayor and Heaney point out the link between folklore about monsters or giants in regions rich in fossil discoveries (Mayor 1993: 49). Mayor proposed that travellers on the Silk Road saw dinosaur fossils in the Gobi Desert. The protoceratops has a bird-like beak and many fossils were found near nests, perhaps giving rise to tales of the griffin. The fact these fossils lay near gold veins helped explain the link between griffins and gold (1994: 58).

Mayor comments that the addition of wings to the griffin’s design was artistic license, based on “the strange creature’s avian characteristics” (1994: 58). The bird beak and nests of eggs were two of these features. Mayor also notes that the tendency of some birds to hoard shiny objects could explain the presence of gold in the nests (1993: 41).

Yet other theories think the stories gave travellers a way to interpret the fossils since griffin legends predate the Silk Road (Dhwty 2014).

Byzantine artists used the griffin in their mosaics. The designs spread from the Eastern Roman Empire into the Western Roman Empire. From there, the Persian imagery passed into the art of Italy, Spain, England, and France.

Griffins became popular figures in tapestries, paintings, illuminated manuscripts, and sculptures. Many medieval gargoyles depict griffins, a trend which sees them continuing to guard cathedrals and even banks.

Despite their reputation for intelligence, courage, and wisdom, medieval griffins suffered something of a character assassination. Bestiaries began discussing battles between knights and griffins. In one fictional travelogue, a knight claims griffins are large enough to carry a knight on horseback to their nest (Drieshen 2019).

A 12th-century legend claimed Alexander the Great had fought griffins. He only overcame the beasts when his archers shot them out of the air (Drieshen 2019). The griffin is recast as a ferocious, dangerous beast, rather than the noble guardian of the Greeks. Clarck Drieshen suggests the popularity of griffin images on coats of arms may have been related to families fighting during the Crusades (2019).

Yet others in the medieval period took the griffin as a symbol due to its role as a ferocious guardian. As Adrienne Mayor puts it, “[b]y medieval times, the griffin had become a creature defined by its allegorical attributes” (1994: 54). At this point, many of the legends seem to fall away, replaced by a laundry list of characteristics.

All except one legend.

Dhwty explains the medieval belief that griffins mated for life. When one died, the other partner remained alone. Dhwty notes that there are claims the Church used the griffin as a model of why re-marriage was wrong, though this may just be a modern interpretation (2014).

The Medieval Griffin and Magic

In the Middle Ages, griffin claws were believed to have medicinal properties. A ‘claw’ is associated with St Cuthbert, 7th-century bishop of Lindisfarne. It’s actually a horn from an ibex goat, but according to medieval lore, griffins only gave away their claws in exchange for medical help from a holy person (Speakman 2020). Two claws and two griffins’ eggs were among an inventory taken of St Cuthbert’s shrine in Durham Cathedral in 1383.

So what do we make of griffins?

Of all the fabulous creatures and monsters of myth, griffins perhaps make the most sense. Scholars have debated whether the legends were based on real animals, like desert-based mastiff dogs. Others think scholars invented legends to give a backstory to the griffin thanks to its popularity as an artistic motif.

Since the medieval era, the griffin has passed into legend as a popular symbol. Griffin gargoyles now guard banks and other buildings. They appear on coats-of-arms and brand logos alike. Any folklore that was once associated with them has largely fallen away, replaced by their role as a protector. Sadly, this mythological creature has largely become symbolic.

What do you think of this noble creature?

Aronson, Marc and Mayor, Adrienne (2014), The Griffin and The Dinosaur: How Adrienne Mayor Discovered a Fascinating Link Between Myth and Science, Washington, D.C.: National Geographic Kids.

Craven, Jackie (2020). ‘The Griffin in Architecture and Design’, ThoughtCo., https://www.thoughtco.com/the-griffin-in-architecture-and-design-177281.