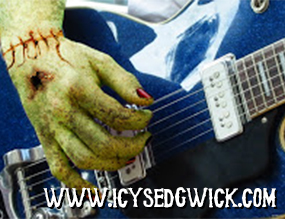 The inhabitants of Karloff Falls gathered at the single bar on Main Street for the annual Halloween Battle of the Bands contest. Some of the townsfolk wore homemade T-shirts to support their friends or neighbours. Others wore disinterested expressions, there solely due to the lack of anything else to do.

MC Marie Festre adjusted her Morticia Addams wig and wiggled onto the stage.

The crowd yelled a greeting in reply.

“Are you ready for the Battle of the Bands?”

“Well give it up for the Queens of Twilight!”

Isolated pockets of applause were scattered among the silent crowd. Four women shuffled onstage, greeted by stony faces. They looked at each other with dead eyes and shrugged. The tallest woman headed for the microphone, and wrapped bony fingers around the stand. Her skin bloomed pale green under the stage lights.

“I’m Elsa, and this is Glenda, Lyra and Rita,” said the singer, pointing to the bassist, guitarist and drummer.

Several fans whooped in the crowd. A man near the front mimed a dramatic yawn. Elsa narrowed her eyes and leaned in towards the mike.
“People keep complaining that music is too manufactured these days. Well, our manager scoured the length and breadth of the state to put us together!”

Elsa’s pronouncement provoked squeals and cheers from the band’s few rabid fans in the crowd. Bored chatter began among the rest of the audience. Lyra picked at the ugly seam that ran up her arm from her wrist to her collarbone. Glenda tightened the bolts in her neck before adjusting the strap of her bass.

“So we say yes, a lot of music is manufactured, but they don’t get more manufactured than us!”
Elsa punched the air to more scattered cheers. Rita and Lyra leaned in to squeal into Elsa’s microphone and the band launched into their first number, Little Lightning Bolt.

Their manager waited in the wings, smiling as the band’s raucous blend of punk and 50s rock n roll won over the more skeptical patrons in the crowd. He twiddled the ring on his little finger, caressing the Frankenstein family crest set in gold.

The Queens of Twilight finished their first song to screams for more.