Hazel trees, alongside oak, ash, and yew, are one of the ‘Big Four’ trees (Mac Coitir 2003). It’s considered both a protector and a marker for sacred places. While some debate that it’s a shrub, we’re going to consider it as a tree in this post. 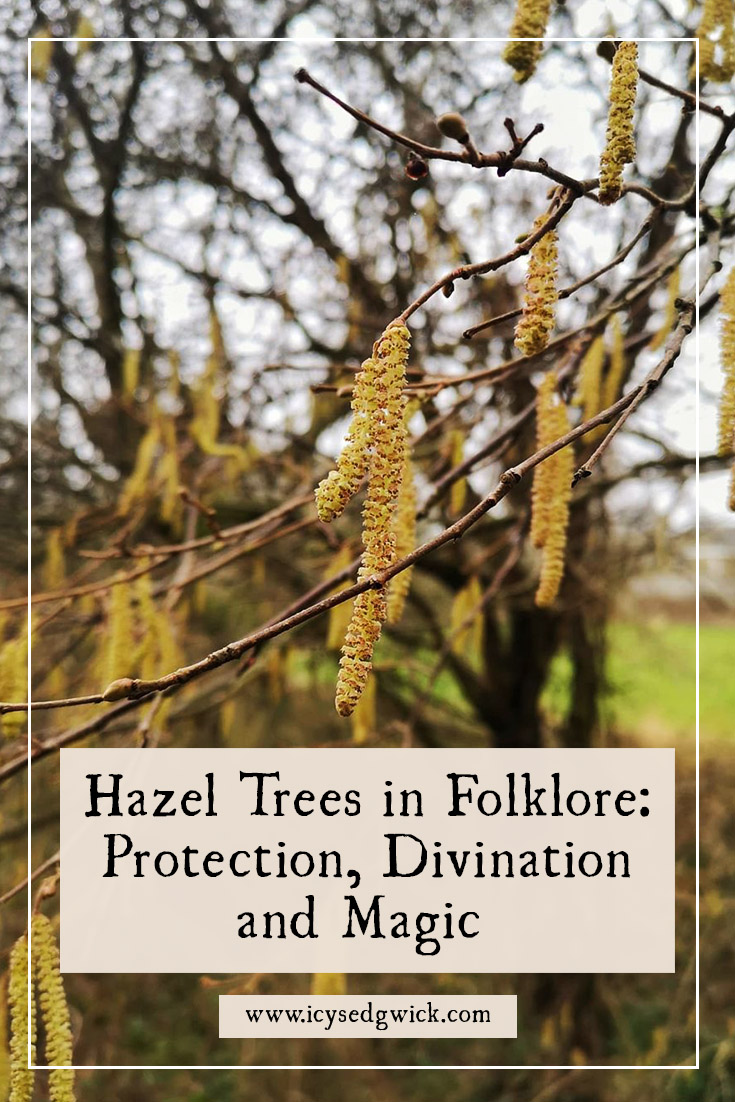 Nicholas Culpeper classified the hazel as a plant of Mercury, while William Lilly assigned it to Jupiter (Harrington 2020: 65). According to Christina Oakley Harrington, Mercury’s caduceus was made of hazel, as was Circe’s wand (Harrington 2020: 65). The tree’s links with Mercury make sense given Mercury’s role as the god of intelligence and communication. This reflects the association between hazel and wisdom that we’ll come back to later.

Hazel also appears as a tree in sacred groves. Silvanus Callirius, the god of the hazel wood, was worshipped in Colchester (Mac Coitir 2003). This shows us a mythical side to the tree, as well as its magical side that we shall explore in this post.

So let’s learn more about the myths and folklore of hazel trees! Keep reading or hit ‘play’ to hear the podcast episode of this post.

In modern Scots Gaelic, a hazel grove is a calltainn, and Druidry.org note that places called Calton can be considered entrances to the Otherworld (2021). It certainly puts a slightly different spin on Calton Hill in Edinburgh. According to Druidry.org, hazel trees are still found near holy wells in Ireland and Britain. They also relate a legend that St Joseph of Arimathea used hazel branches to build the first Glastonbury Abbey (2021).

In one old custom, 14 September was Holy Cross Day. Children got the day off school to collect nuts, though this custom died out with the First World War (Trees for Life 2021). Nutcrack Night in November marked the day when people opened their stored nuts (Trees for Life 2021). Yet Druidry.org note that Nutcrack Night was actually Halloween, the night on which young couples roasted hazelnuts over the fire. If they burned steadily, it meant the relationship would fare well, but if the nuts flew apart, it spelled doom (2021).

It was once a tradition to give brides hazelnuts on their wedding day to pass on wisdom, fertility, and good fortune (Dietz 2020: 66). In Devon, this job fell to an old woman who waited outside the church to greet the bride with a basket of hazelnuts (Baker 2011 [1969]: 71). This isn’t so surprising when you learn hazelnuts were linked with love, fertility, birth, knowledge, and poetry (Baker 2011 [1969]: 71).

Girls might even use hazelnuts to identify their future husband. They assigned the names of potential partners to different hazelnuts and tossed the nuts into the fire. Whichever nut gave the loudest pop or brightest flame indicated the best prospect (Baker 2011 [1969]: 71). The Romans even burned hazel torches on the wedding night to bring happiness to the new couple (Baker 2011 [1969]: 72).

Yet there is a darker side to the link between love and hazel trees. Boys in Wales might signify they’d changed their mind, or wanted to break an engagement, by giving a girl a hazel stick (Mac Coitir 2003).

In Ireland nine hazel trees surrounded the well of life. The nuts fell into the water, creating “bubbles of mystic inspiration”. Those who are the nuts became seers and poets (Baker 2011 [1969]: 71). According to the Trees for Life website, a salmon ate the hazelnuts from these trees. A Druid envied the salmon’s wisdom and caught it. He tasked his apprentice with cooking the salmon, but he wasn’t to eat any. Some of the cooking juices spattered the apprentice’s thumb so he put his thumb into his mouth. The apprentice was Fionn Mac Cumhail, and this explained his great wisdom (2021).

Niall Mac Coitir relates a Scottish version of this story (2003). In this version, the apprentice is a man named Farquhar. He’s directed to catch a white snake that emerges from a hazel bush and boil it in a pot. During the process, he uses his finger to block some of the steam that emerges. When he sucks the water from his finger, he gains knowledge of all medicine. This link between the snake and medicinal knowledge makes sense when we think of the myths surrounding Aesculapius. The Greek/Roman god of medicine learned some of his trade from an injured snake that he cured.

Hazel was a favoured wood for divining rods (Binney 2018: 46). Ruth Binney advises that you cut a 45cm forked branch. Hold the prongs between your thumb and first two fingers. The joint should point downwards (2018: 46). Slowly walk across the ground you’re searching and pay attention to what the branch does. It should rise of its own accord near water and bend backwards (possibly even breaking) over a spring (Binney 2018: 47). For best success, cut your rod between sunset and sunrise on a new moon (Binney 2018: 47).

You could also use hazel rods for other forms of divination. According to Alexander Porteous, people in Europe threw hazel rods into the air. They drew their omens from the direction in which the rods fell (2002 [1928]).

Magic and the Hazel

Hazel was the favourite wood for magic wands. Cutting them at sunrise gave them a boost of solar energy (Binney 2018: 50). Harrington recommends cutting your magical hazel at sunrise on a Wednesday (Harrington 2020: 66). A Scottish tip advises that you shouldn’t cut hazel (or willow, for that matter) during a waning moon. This left the wood too dry and brittle (Mac Coitir 2003).

You could also carry a hazel rod, a fathom and a half long, with a green hazel twig pushed into it. This cast invisibility over the holder (Baker 2011 [1969]: 72). (A fathom is approximately 1.8m, so that would be a rod 2.7m long!) Alternatively, carry hazelnuts in an orange pouch for invisibility (Harrington 2020: 67).

Double hazel nuts carried in the pocket would bring luck and protect against toothache and witches (Baker 2011 [1969]: 72). The double nut was sometimes referred to as ‘St John’s nut’ (Mac Coitir 2003).

Weave hazel twigs together to make a crown. Wear it while making wishes to make them more effective (Dietz 2020: 66). The flexibility of hazel lends itself well to such an endeavour.

Hazel and the Maiden Garland

Yet in parts of England, hazel formed the basis of the maiden’s garland. This was a crown, made from either hazel or willow, and used to mark the death of a local person who had died unmarried (Morris 2003: 358). They were usually female, but not always. The mourners carried the garland above the coffin and then hung it in the church after the funeral above her pew. It was left there until it rotted away. They were sometimes thrown out during renovations.

In one description, we hear they were made of coloured paper, made to look like flowers, and fixed to a circular hoop. This is the part sometimes made from hazel. A woman’s glove was cut out of white paper and hung from the middle, and they often wrote the woman’s name and age on it. Earlier descriptions talk about real flowers and gloves, but the paper ones seemed to become more common. When fresh flowers were used, lilies were popular, as these have represented purity since early Christianity. Lily wreaths used to be laid on the coffins of virgins.

As local church life changed and mourning itself altered, the tradition had almost completely died out by the 1920s. Even Shakespeare mentions one in Hamlet about the funeral of Ophelia, in which “she is allow’d her virgin crants”, which is another term for such a garland. ‘Crants’ is believed to come from krans, the Old Norse word, meaning ‘wreath’ (Morris 2003: 356). It seems so strange to see these garlands, made to symbolise a person who didn’t marry, made from a tree so heavily associated with love.

The hazel tree also offered protection when used in specific ways. Carrying a hazel stick could protect you from evil if you were walking at night (Mac Coitir 2003).

Sailors might wear sprigs of hazel to protect themselves from shipwrecks (Harrington 2020: 66).

So what do we make of hazel trees and their folklore?

We can see why hazel trees are one of the Big Four. They’re associated both with foundational myths and more commonplace folklore. This links them into both a wider tradition of myth-making and the folk practices of everyday life.

Much like the hawthorn, they offer nutritious fruit, and like the oak, hazel trees offer protection and guidance through divination. Just keep your wits about you if you decide to go collecting hazelnuts. That helpful stranger might just be the Devil in disguise…