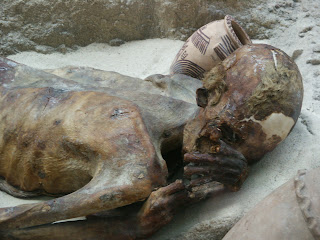 In the wake of the hysteria surrounding vampires and the never-ending obsession with zombies in popular culture, and to a lesser extent werewolves, I’ve been rather fascinated by the other monsters that I feel have been somewhat ignored. While the rest of the world tries to decide whether it prefers blood-sucking, lycanthropy or good old fashioned flesh-eating, I’ve been sat here championing the cause of mummies. Look at the all-powerful Imhotep when he’s been fully revived at the end of The Mummy. Who would you rather have, a sparkly disco vamp with possessiveness issues, a moody werewolf who has a worse time of the month than you, a shambling rotting corpse who is truly more interested in your brains than your beauty, or an immortal sorceror from Ancient Egypt? Ooh toughie. (N.B. I feel compelled to exempt Carrie Clevenger’s Xan Marcelles and Sam Adamson’s Northern Vampire from my comments, as they’re both ace)

I actually wrote a mummy story a while ago. True, No Flash is more of a vehicle for my pent-up rage regarding tourists and the fancy cameras they don’t even know how to work, but it still stars a mummy. Naturally my fascination with ghosts and spectres knows no bounds, particularly due to my fondness for a particularly dashing Cavalier known as Fowlis Westerby, but I’m not averse to writing corpse brides either. A few weeks ago I decided to resurrect the skeleton from the B-Movie Monster graveyard, while changelings got in on the act soon after. I finally dipped my toe in the waters of science fiction with Evolution, and I think it was at this point that I suddenly realised what I was doing. I was exploring the idea of monsters.

Humans have had monsters for thousands of years. True, those of the cavemen were probably not as imaginative as the Minotaur or the Hydra, but they would be monsters nonetheless. Classical mythology is rife with monster stories, and when you think about it, Lucifer has provided an entire religion with a boogeyman for centuries. We have monsters to justify our fears, but also to create a sense of control. Abandoned buildings can be unsafe, particularly at night, so what better way to keep people out than to install a wandering ghoul who will eat your soul if you venture inside? And how many children have been told that a monster (usually of their parents invention) will get them if they don’t do what they’re told?

Monsters make excellent metaphors, too. Vampires are often made to stand in for the dangers of illicit passion, while zombies represent the power and threat of the mindless mass. An entire sub-genre grew up around the fear of Communism in 1950s Hollywood, with the best example by far being the 1954 version of Invasion of the Body Snatchers. No one watching the film can possibly forget what sector of society the Pod People are intended to represent. It says a lot about the engulfing fear of the time that later versions feel neutered and sterile by comparison – indeed, the fear has not been successfully transposed onto another enemy.

In a lot of ways, monsters represent a particular facet of Sigmund Freud’s theory of the uncanny. Freud talks about many principles which engender uncanny feelings in a person, but the one relevant to monsters is that of the so-called “return of the repressed”. Rather, a person forces their fears, guilt and doubts into their unconscious through repeated acts of repression, but rather than staying there, these feelings return to plague the person. In many ways it is a form of paranoia, in that the person projects these feelings into the space around them (see Robert Wise’s The Haunting for a masterclass in this) but in the case of the monster film or story, these feelings take corporeal form in the shape of the monster that plagues them. I took that incredibly literally in Calling All Skeletons, when the past actions of an aspiring politician come back to bite him in the ass, but writers and artists have been dealing with this for years. Some call it karma – I call it uncanny.

Over to you. What kinds of monsters do you enjoy writing, or reading about? And more importantly…why?