Go to Devons Road in London and you’ll find a pub with hot cross buns hanging above the bar.

I know, it’s pretty weird – even for a pub. But a legend has grown up around The Widow’s Son in Bromley-by-Bow. Every year, a sailor arrives on Good Friday and places a hot cross bun in the nets over the bar. 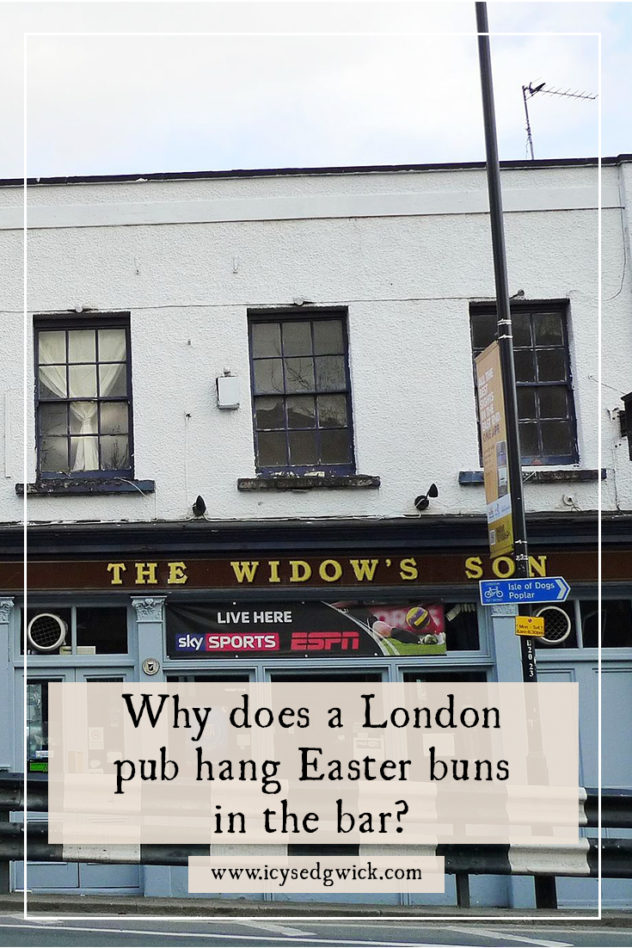 A widow’s house originally stood on the site. Her sailor son spent much of the year at sea, but one year she expected him home at Easter. He promised to return on Good Friday.

She baked him a hot cross bun and set it aside when he didn’t return that day. Perhaps she expected him soon after.

But her son didn’t return that Easter. So the following year she did the same thing. She baked a batch of hot cross buns and set one aside for her son.

The custom continued and every year she added another unclaimed bun to the pile. Her house became famous for the growing collection of hot cross buns.

Some accounts name her as Mrs Hart and she apparently died in 1813. In the Sutton Companion to the Folklore, Myths and Customs of Britain, Alexander Barrie notes that the sailor wrote home in 1788 to ask her to save a bun for him (2005; aff link). If that’s true, then she kept saving hot cross buns for another 25 years.

When the cottage was demolished and the pub built, the owners named it the Widow’s Son in honour of the story. It’s held the name since at least 1851. Some descriptions even call it the Bun House or the Bun Shop.

The owners continued the custom by inviting in a sailor every year, and it’s even part of the lease now. If you believe the tales, the tradition continues. The Royal Navy now supplies the sailors. Allegedly the hot cross buns were taken to safety during the Blitz.

The pub closed in 2015 for potential redevelopment. So the 2016 ceremony took place at the Queens Head in Limehouse. Luckily The Widow’s Son reopened earlier this year.

Is the legend true?

It’s difficult to tell. But stories of setting aside baked goods on Good Friday are more common than you’d think. Many women hung baked buns from the ceiling to keep them dry all year.

I did find mention of the custom in the Sheffield Daily Telegraph from 1898 as well as the Jersey Independent from 1909. The Jersey paper claimed that the widow’s son disappeared 70 years previously, which places the start of the ritual at 1839.

So it’s not a recently invented tradition. But there’s no real proof that the widow or her son actually existed.

But why hang up hot cross buns?

According to a common belief, baked goods made on Good Friday don’t get mouldy. Christ’s body showed no signs of decay after the crucifixion, hence no mould on hot cross buns.

So households hung up a hot cross bun in their kitchen as a good luck sign for the rest of the year. Due to the cross on top, they can also banish evil spirits from your kitchen.

Apparently, the buns also have curative properties and they might be grated into water to produce a medicinal drink. Far be it from me to suggest the curative nature might come from the mould growing on the buns!

Some say they protect houses from fire. I’d debate the truth of the last one; the Widow’s Son pub caught fire in the 1980s. Some of the buns still bear signs of scorching.

In Green Men & White Swans: The Folklore of British Pub Names, Jacqueline Simpson notes that along the coast, people hung up baked buns to ‘protect members of the household from shipwreck’ (2011; aff link).

In Glossary of Words Used in the Neighbourhood of Whitby, F. K. Robinson described seeing Good Friday biscuits hanging from a ceiling (1876).

Elizabeth I deemed hot cross buns so special that in 1592 she banned their sale on any day aside from Good Friday, Christmas, and burials. Although I will note that I’ve heard some commentators say she was probably trying to weaken the Catholic hold on England.

Why not share one with a friend this coming Good Friday? Make sure you say “Half for you and half for me, Between us two shall goodwill be” as you do so to ensure good friendship.

There’s no way to know if the widow actually existed. And while it’s cool that the pub continues the tradition, it does turn the tale into a slice of tourist drama. Still – anything to keep folklore traditions alive!

Over to you! Do you like hot cross buns? Will you be hanging one up this Good Friday?