There is always something strange about a creature made up of different parts. They exist in a liminal space, not belonging to one particular species, and often endowed with the strengths of all. Hybrid mythical beasts are particularly popular, bleeding from classical legends into medieval literature. 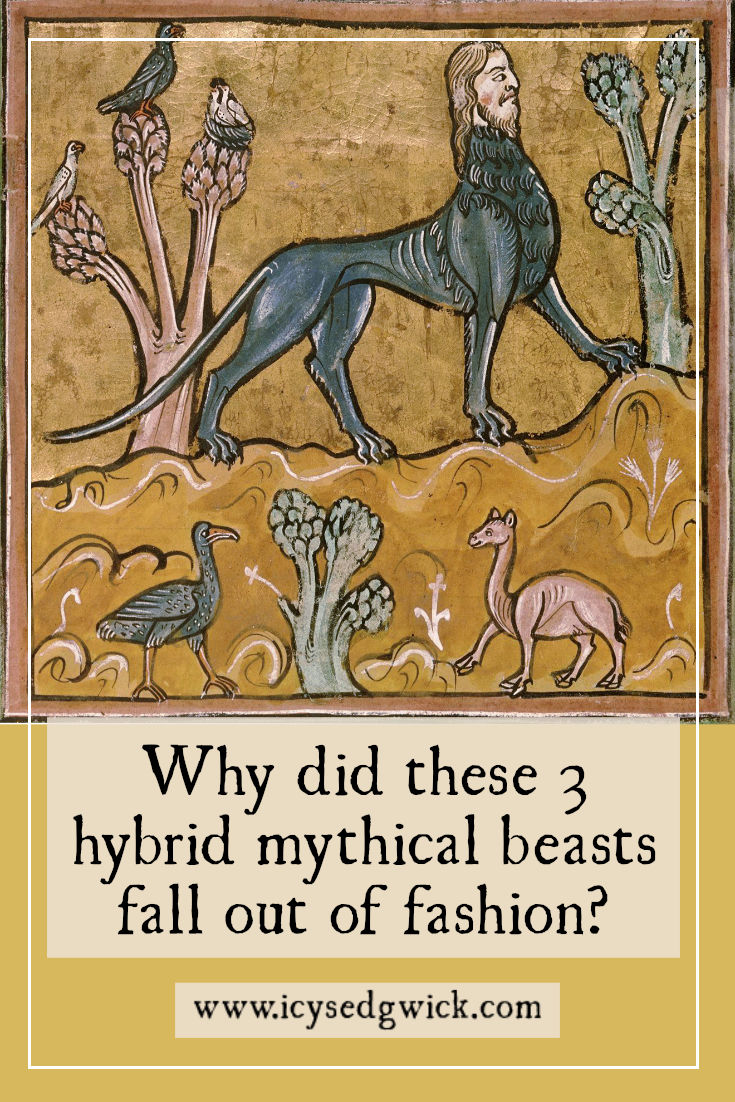 We’ve already looked at griffins, which are essentially hybrid creatures. Unicorns could also be seen as hybrids, with their oryx-like horn and horse bodies.

Yet these following three mythical beasts are lesser-known hybrids found in myth and legend. Where other creatures keep reappearing, re-invented for new tales and audiences, these three hybrid mythical beasts have faded from view. So we’re going to take a look at them now!

Let’s meet the manticore, the cockatrice, and the Chimera.

This creature, from either Persia or India, is similar to the sphinx.

The manticore has the head of a bearded man, a lion’s body, and a tail made of venomous spines. Some depictions include a scorpion’s tail. It comes equipped with fearsome claws, capable of tearing apart a person in one swipe. Then there is the triple row of teeth. Occasionally accounts will mention wings. So not only can it run at impressive speeds, it can sometimes also fly.

Its name translates as ‘man-eater’, referencing its favourite food. According to the legends, manticores preferred human flesh. When they did dine on people, they left nothing behind – not even clothes. Its favourite method of hunting was to lie in long grass so that only its human head was visible. Other people would come close, and the manticore would strike. Clearly the answer was to avoid bearded men who hung out in long grass. However, this part of the legend was used to explain the disappearance of those who entered the jungle and didn’t return. The manticore became a cautionary tale to keep people out of the woods.

Many of the stories came from our old friend Ctesias, who also introduced his readers to the unicorn and the dog-headed man. He apparently saw one when it was captured and presented to the king of Persia.

Aelian claimed the manticore came from India. In his description, the manticore can shoot the venomous spines from its tail as if they were arrows. Only the elephant seemed impervious to its sting, while the manticore couldn’t bring down a lion. Referencing Ctesias, wherever the stings landed, more manticores would spring up. In Aelian’s description, he also claimed people would hunt young manticores to crush their tails, preventing the growth of the dangerous stings (1959: 233-237).

A later Greek writer, Pausanias, was far more skeptical. He believed tales of the manticore actually described a tiger. The claims about its three rows of teeth and stinging tail was added as a way to share their fear of the big cats. Naturally, Pliny the Elder considered they were real. He thus included them in his Naturalis Historia.

Like other creatures from ancient mythology, the manticore made its way into medieval bestiaries from Pliny the Elder’s work. It was occasionally confused with another creature, the mantyger, which had tusks and the feet of a monkey. Medieval writers used the manticore to represent the Devil.

Yet unlike the dragon, griffin, or unicorn, the manticore has never really attained any kind of popularity. With the opening up of forests and jungles, cautionary tales became less necessary.

The cockatrice boasts a serpent’s body and tail, with the head, wings, and legs of a rooster. Some descriptions add bat wings, a tail complete with a sting, and a forked tongue. They were popular in Elizabethan dramas and Shakespeare references them.

People feared the cockatrice for its ability to kill people with ease. Some thought a cockatrice needed only to look at them. Others thought it needed to touch or breathe on them. Its breath was apparently so venomous it would kill vegetation. Only weasels were immune to the cockatrice death glare. So manticores can’t kill elephants, and a cockatrice can’t kill a weasel. Right.

That said, you could defeat a cockatrice by letting it hear a rooster crow, since it would die instantly. Alternatively, you could kill it by showing it its reflection. I can’t help thinking there’s something of the Medusa myth about this part. Though the cockatrice didn’t turn people to stone with its stare.

It’s sometimes confused with a basilisk. According to the 12th-century text De naturis rerum by Alexander Neckam, you’d get a basilisk if a rooster laid an egg which was incubated by a toad. The confusion between the basilisk and the cockatrice came from a translation issue. In 1397, John of Trevisa translated ‘basiliscus’ in the 13th-century De proprietatibus rerum as ‘cockatrice’ (Wood 2016). Laurence A. Breiner suggests the ‘classic’ cockatrice imagery comes from illuminated manuscripts. Here, unclear drawings and “inadequate verbal descriptions” led to their design (1979: 35).

Indeed, some believed the basilisk was actually a cobra – certainly an animal that can seemingly kill from a distance (Breiner 1979: 34).

The cockatrice also appears in alchemical literature, where it shares features with the salamander and the ouroboros. Here, it stands for the transmutation of metals, along with death and rebirth (Wood 2016). In a way, it’s hardly surprising since the cockatrice itself is a transmutation of different animals. Breiner notes that the ashes of a basilisk could apparently turn metals into gold (1979: 36). Yet it’s only in England that they use cockatrice instead of basilisk.

Despite its popularity in Elizabethan drama and poetry, it’s fairly rare within dragon stories in Britain. That said, Wherwell in Hampshire apparently suffered a cockatrice after one hatched from a duck egg. Much like the Lambton Worm, it grew to a gargantuan size and kept snatching villagers for its meals.

Eventually, someone put a bounty on its head – four acres of land in exchange for killing the beast. A man named Green lowered a piece of polished steel into its lair. The cockatrice tried to fight its reflection until exhaustion overcame it. Green took his chance and killed it with his javelin. There is still an area called ‘Green’s Acres’ in Harewood Forest (Wherwell History Group 2017). The village church at one point featured a cockatrice on its weathervane.

Much like the manticore, the cockatrice has largely faded from the popular imagination. Only the Wherwell tale gives it any sense of its own folklore. Beyond that, it’s been overtaken by the more famous basilisk.

The Chimera first appears in Homer’s Iliad. It’s usually described as being a lioness with a goat’s head at the back of the body and a tail that had a snake’s head. Others say she had a lion’s head and a goat’s body. If having three heads wasn’t enough, she could also breathe fire. She’s always considered to be female.

The main theory was that she was the offspring of the mighty serpent Typhon and the half-woman, half-serpent monster Echidna.

A sighting was a bad omen. Nowadays, ‘chimera’ refers to any fusion of two or more animals. It’s also a term that appears within genetics, but for this post, we’ll stick to mythology.

The Myth of the Chimera

Unlike the other creatures in this post, the Chimera does have a specific myth associated with it. The beast terrorised the lands around Lycia, and it seemed no one could defeat her. The king ordered Bellerophon to kill her. Though this was partly because the king wanted rid of him, and apparently thought the Chimera could do his dirty work for him.

Except Bellerophon didn’t get the “you’re supposed to die” memo and he enlisted the aid of Pegasus, the famed winged horse of Greek myth (itself a hybrid beast).

Pegasus allowed Bellerophon to attack the Chimera from the air. This kept both Bellerophon and Pegasus safe from her monstrous heads and fiery breath. Bellerophon added a lump of lead to his spear. The Chimera’s breath melted the lead, which killed her when Bellerophon thrust the spear into her throat.

According to Pausanias, a relief of the battle appeared on the throne of Aesculapius in his temple at Epidauros. It seems a strange story to represent in a temple of healing.

Unlike the manticore and cockatrice, the Chimera didn’t make a similar leap from classical writing into medieval texts. Chimerical figures do appear, but often with a different set of body parts. Perhaps the Chimera’s appearance in her own myth solidified her mythical status. She doesn’t appear in a bestiary as an example of a fantastical creature. There is no real evidence that medieval scholars ever thought she was ‘real’. Even classical writers thought she was a metaphor for volcanic activity in the Lycia region.

The Fascination with Hybrid Mythical Beasts

So what lies behind the fascination with hybrid mythical beasts, both in classical times, medieval art, and even modern popular culture? It is true that all three of these beasts are far less well-known in the 21st century. We don’t find manticores emblazoned on children’s clothing as mermaids are. Nor does the cockatrice get its own themed makeup line like the unicorn.

The closest parallel I can think of for the Chimera is its use in Fullmetal Alchemist to denote a creature made of different parts. Indeed, this is where the Chimera lives on through its use as a term in modern genetics.

The cockatrice alone manages to penetrate English folklore, but there it languishes as a curiosity from a bygone age.

Perhaps their role as a terrifying cautionary tale puts them into a different category from their more famous mythical brethren. As the threats they represent are overtaken by modern developments, they become less necessary. And while the manticore and cockatrice both appear in heraldry, they don’t have the same noble bearing as the unicorn, griffin, or dragon.

But who knows? Maybe we’re overdue a retelling of the tale of Bellerophon and the Chimera…

Had you heard of these hybrid mythical beasts before?

Aelian (1959), On the Characteristics of Animals, trans. by A. F. Scholfield, London: William Heinemann.