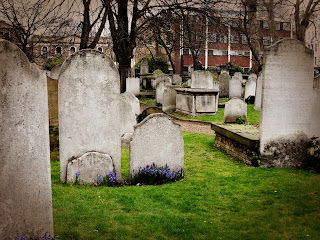 Like most writers, I lead something of a double life. Evenings, weekends and stolen moments are spent writing; either creating something new, or editing something that I’ve already written. But by day, I work in an office just on the edge of the City of London. The back of the office overlooks Bunhill Fields, one of the few inner city burial grounds that hasn’t disappeared under an office block or housing.

Bunhill Fields has been an area associated wth death since the seventeenth century, when it was set aside for those bodies that couldn’t fit into other churchyards. Naturally the plague that swept London in 1665 decimated the population, and caused an explosion in cemetery overcrowding. It was eventually converted into a graveyard for dissenters, which was extended to include anyone who practiced a religion outside of the Church of England. 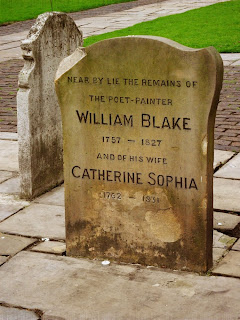 Bunhill Fields was closed in January 1854, although the City took it over in 1867 and reopened it as an inner city ‘green space’. These days, half of the area is a park, home to squirrels and other wildlife, and the rest is the cemetery. Iron railings serve to keep the graves separate from the open space. William Blake, Daniel Defoe and John Bunyan are all buried here, along with approximately 120,000 other people.

It’s a lovely space, and a quiet place to have your lunch when the weather’s fine. I decided to have my sandwiches there yesterday, and my only company was an inquisitive squirrel and a lone magpie. Being the recluse that I am, this is my idea of bliss. People might think eating your lunch by yourself in a graveyard is a bit morbid, but a) I never pretended to be a cheerful, sunny sort of person, and b) I envy the peace and quiet of those that dwell in eternal slumber.

It’s sometimes easy to forget that everywhere you walk in London, you’re treading a line through the city’s past. The living and the dead jostle for space in the capital. Hell, the area around Bunhill Fields used to be used for plague pits – my office probably sits on one (though I’m hoping the Yersinia pestis bacterium is dead by now). How many lives surround us? The whole of history is exactly that – a story. At any given moment, I’m surrounded by hundreds of thousands of stories; some of them are old, some of them continue right now, and some of them have been forgotten. I’m part of some of them. I even tell them.

I’m off out to have lunch with my new friends. Maybe they’ll tell me some stories…