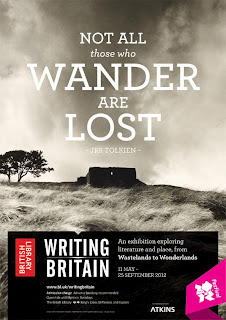 I had a brief visit to London over the Bank Holiday weekend, and ended up at the British Library for their Writing Britain exhibition. Now, I lived in London for seven years, and it is to my eternal shame that I only visited the British Library twice. It’s often easy to overlook the British Library as a destination, overshadowed as it is by the likes of the National Gallery and the British Museum, and when you live somewhere, it can also be easy to take for granted what’s sat on your doorstep.

The British Library is a fantastic space, and they seem to put a lot of thought into their exhibitions – a previous one that I saw was about photography, while the last one was about Charles Dickens and the supernatural (so clearly of great interest to me). The Writing Britain exhibition had at its heart the aim of exploring the ways in which the British landscape has inspired British literature over the years. In many cases, they’d included original handwritten copies of the texts, as well as early first editions – and it was interesting to see the actual handwriting of these literary greats. It somehow makes them more human when you realise that even they write like a crack-addled panda with a box of crayons.

The exhibition itself had two major effects on me. The first was in truly appreciating the diversity of the British landscape. I’m not one of those people who has travelled all over the world, filled with stories of the Far East or south America, but I am a person who has seen a great deal of Great Britain (I’ve never been to Northern Ireland so I shan’t call it the United Kingdom). Weirdly enough, I still sometimes forget the range of locations that comprise our little island. Rural pastoral scenes, wild moorland, coastal escapes and our industrial past couldn’t NOT inspire writers, and the exhibition made me long to explore the untamed landscapes of my native Northumberland.

The second made me examine my own work, to see how much of the landscape around me had inspired my writing. Strangely enough, I don’t think it has inspired my writing to the extent that I might like. Elements of Victorian London can be seen in my steampunk Vertigo City, and Edinburgh provided a lot of inspiration for the Underground City in my work in progress, The Necromancer’s Apprentice. Beyond that, I struggle to find any ‘themes’ related to landscape – and there is essentially nothing of Newcastle, my hometown, in my work. If I’m honest, I’m actually ashamed of myself for that.

I’m not really sure how to categorise my writing – normally my idea is formed from a ‘what if’, or it’s related to something happening. I often have ideas for settings that I want to use but I only like to actually use these settings when I have a story that I can tell within them. After all, a setting is all very well, but it’s nothing more than an empty set unless something is going on in it. I suppose you’d consider me a ‘plot driven’ writer, in that my stories have to be about a ‘thing’ or ‘event’. If I was a character driven writer, would my work be different? Would I find it easier to use landscape to reflect conditions surrounding a character, or their own internal landscape?

It’s something I think that I will endeavour to explore, and I highly recommend the exhibition for writers and bibliophiles alike.

Writing Britain is on until September 25 and you can find out more details here. Image is Writing Britain: Wastelands to Wonderlands, Top Withens near Haworth, Yorkshire 1977, by Fay Godwin © British Library.