The London Underground is a much older system than we often give it credit for. As Peter Ackroyd points out, it’s old enough that it’s congruent with figures we consider ‘historical’ like Jack the Ripper (2012: 112).

Given it’s such an old system, burrowing through the very clay on which London stands, it’s hardly surprising that plenty of folklore and ghost stories lurk in its tunnels. Drivers have reported seeing shadowy figures moving in the unused tube stations (Illustrated London News 1987: 78).

There’s even an urban legend that the Elephant & Castle shopping centre is a cover for a secret underground bunker in the area. This bunker apparently occupies disused underground tunnels for an extension that never happened (Wood 2013). 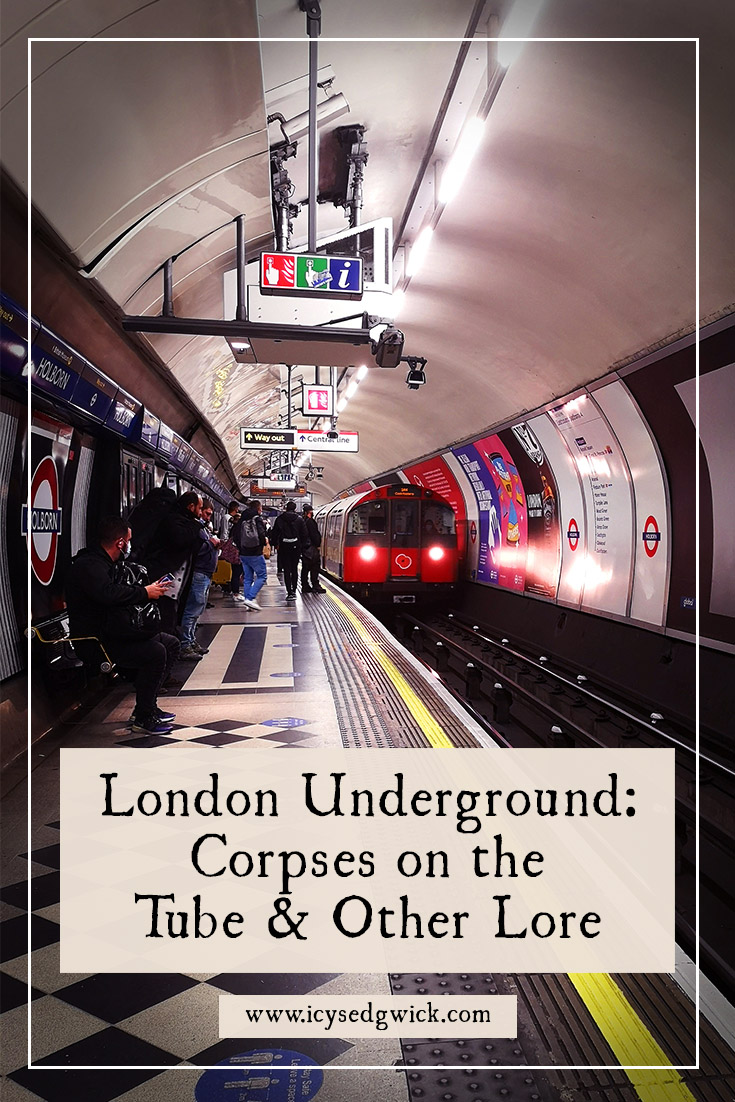 How about the ongoing legend that resurfaces periodically about a group of mutated Londoners who live on the network? According to the legend, they first moved into the tunnels in the late 19th century, and have continued to live down there by feasting on discarded food and the occasional lone commuter. This legend even formed the basis of the 1972 horror film, Death Line.

Never mind the old phrase ‘Mind the gap’, perhaps we should be more worried about what’s in the gap…

The tale of the Egyptian princess at the British Museum Station is perhaps my favourite piece of Underground folklore. The station once stood between Tottenham Court Road to the west or Holborn to the east on the Central line.

There was a rumour that a tunnel connected the station to the Egyptian Room at the British Museum. The ghost of an Egyptian princess, whose mummy was in the museum, would head down this secret tunnel to the station. She apparently screamed in the tunnels (Ghost-Story.co.uk 2003—2016).

In the early 1930s, newspapers offered a reward to anyone who would spend the night in the British Museum station. No one volunteered. The station closed on 25 September 1933 since it wasn’t very popular. More people used the stations to either side which had connections to other lines.

But the story gets stranger. Two women apparently disappeared from Holborn Station in 1935, although I couldn’t find any mention of this in the British Newspaper Archives. According to the legend, marks were found on the walls of the British Museum Station soon after.

That said, I did find one fascinating snippet regarding the mummy ‘ghost’ of the British Museum.

“It was never a real ghost, and could be seen only in daylight. […] In some way one of the mummies in a glass case was so placed that it caught the light at an odd angle. The result was that by standing at a certain point in the gallery there was the illusion of a mummified ghost erect.”

The story of the Egyptian princess ghost inspired two short stories by me! One is ‘Ghost Train‘ and the other was ‘Midnight Screams at Holborn’. You can find it in my Black Dog & Other Gothic Tales collection, or hear me read it here!

Bank, Liverpool Street and Aldgate Stations were all supposed to have been built on plague pits. It’s almost a given at this point that most parts of London will claim a link to plague pits. This is almost a classification of folklore of its own.

In the case of Liverpool Street Station, it’s not far from the truth. Crossrail work near Liverpool Street station unearthed a mass grave in 2015. The thirty skeletons were believed to have been victims of the Great Plague outbreak of 1665 (Dempsey 2015).

But how does that explain the ghostly figure seen on the tube? Staff sometimes see a man in white overalls waiting on the eastbound Central Line platform after trains have stopped for the evening. He disappears if anyone tries to approach him.

Aldgate also allegedly stands on a plague pit. Station opened in 1876 and soon after, staff heard footsteps in the tunnels that stopped abruptly. But it’s unlikely to be anything malevolent. An electrician almost died after he fell onto a live rail. 20,000 volts ran through the man, yet he managed to survive. Staff nearby saw an ‘elderly angel’, described as a “luminous figure of an old lady” kneeling beside the man and stroking his hair. Is she the ghost of Aldgate Station?

Now, there are also legends of tube lines going around plague pits rather than through them. For example, the Piccadilly line apparently curves around a plague pit at Hyde Park. Indeed, many empty patches of ground get called plague pits regardless of the truth (Roud 2008: 121). The construction of the Victoria line was one such line considered to have encountered a pit.

That said, Scott Wood notes that there are no archival references to the digging of the Victoria line disturbing dead bodies (2013). In fact, developers know exactly where mass graves are since they appeared on maps. Furthermore, before the 1665 outbreak, people buried plague victims either in churchyards or in the grounds of the nearest pest house. These pest houses were hospitals specifically to isolate plague victims from the rest of the community. The truth is…there just aren’t as many plague pits as people assume there are.

The Ghost of a Disaster

The underground tube stations seemed to provide an ideal form of shelter during air raids. The authorities weren’t happy about this, but by 1943, they’d had no choice but to open the stations as makeshift shelters.

On March 3, 1943, 500 people were already in Bethnal Green Station. Over 1500 people were outside, standing on the wet steps leading down into the station. At almost 9 pm, an anti-aircraft battery fired 60 rockets. The explosions caused a mass panic and 173 people died in the ensuing stampede and crush. 27 men, 84 women, and 62 children died, making it one of the worst civilian disasters of the Second World War.

The most famous story comes from 1981. It involves a worker who was getting ready to close the station for the night. The trains had stopped running and he was the last member of staff left. While finishing the last of his paperwork, he heard children sobbing. Blaming over-tiredness, he kept working, but the sound grew louder. Female screams added to the crying, along with sounds he described as being like those of a panicked crowd.

The disembodied sounds lasted for almost 15 minutes, by which point he bolted from his office and left the station. Other members of staff have apparently heard something similar at night.

Likewise, a reoccurring haunting happens on 4 December every year. A crash at Lewisham Station in 1957 killed 90 people. Over a hundred were injured. People still hear their desperate cries on the anniversary. Others say the screams are from the Second World War.

The Mysterious Passenger at the Kennington Loop

The Kennington Loop is a section of tunnel at Kennington Station. The passengers leave the train when it terminates at Kennington, then drivers take the train through the loop to send them back up the line. In the 1980s, a driver and guard stopped in the loop at a red light. They heard the doors connecting the carriages open and shut as if someone was making their way along the train.

Worried that a passenger may have been left on the train, they went to investigate. The train was empty. They mentioned it to their colleagues, only to find they weren’t the first to experience this. They pinpointed the start of the activity to a tragic death on the line. A man tried to move between carriages while the train was moving but he fell onto the tracks.

That said, that’s not the only death in the area. A 21-year-old labourer was electrocuted at the station in September 1926. Could it be Frederick Norman disturbing the trains? (Birmingham Daily Gazette 1926: 1)

A similar haunting seems to happen at Elephant & Castle Station, where a girl walks the length of the last train of service. She vanishes by the time she reaches the driver’s cab. No one knows who she is, or what she’s looking for.

The Corpse on the Tube

We couldn’t cover the folklore of the London Underground without delving into an urban legend or two. The legend of the corpse on the tube would appear to date to 2007 on an internet forum. According to the story, a female art student was heading home late at night. She was alone in the tube carriage, but for a man in his 30s.

The train stopped at a station and three more people got on. Two men flanked a woman who appeared to be unconscious. The student decided to ignore them until the other man sat next to her. He chatted on as if they were old friends, only pausing to whisper that she should get off at the next stop.

She didn’t fancy staying on the train with the three newcomers so she left the train with the man at the next station. He told her that the unconscious woman was actually dead, and a pair of scissors had been sticking out of her head.

So is it true? Highly unlikely. For one thing, why would two men carry a dead woman around on the tube with the actual murder weapon still sticking out of her head? For another thing, the story has also been repeated in other cities, including Sydney. Scott Wood also notes that versions of the story also date back to the 1980s, taking place on intercity trains as well as the Underground (2013).

There’s something weird about travelling underground. It’s easy to lose your bearings as to where you are. The seeming miles of tunnels linking lines belies how close stations can be at surface level. (Trust me, it’s quicker walking between Piccadilly Circus and Leicester Square than it is changing tube lines to travel underground).

Being in such a weird place can tickle that little voice at the back of your brain that wonders what else is down there with you. The film Quatermass & The Pit explored this very idea in 1967 when a new tube extension uncovers something that was supposed to remain buried. And Creep answered the question about who—or what—shares the platforms with you.

The London Underground is what Marc Auge refers to as a “non-place” (2009). It’s somewhere transitory, that we pass through to get from A to B. For the time that we’re down there, we’re temporarily taken out of the ordinary world and placed in a liminal world where the journey is all that matters. You’re not at your starting point or your destination—you’re entirely in the In-Between.

Have you had any weird experiences on the tube? Let me know below!

Wood, Scott (2013), London Urban Legends: The Corpse On The Tube & Other Stories, Stroud: The History Press.