Tales of legendary witches often focus on their awesome powers, their familiars, or their fearsome reputation. Northumberland’s most famous witch, Meg of Meldon, has but one of those. But better than that, she was a real person. 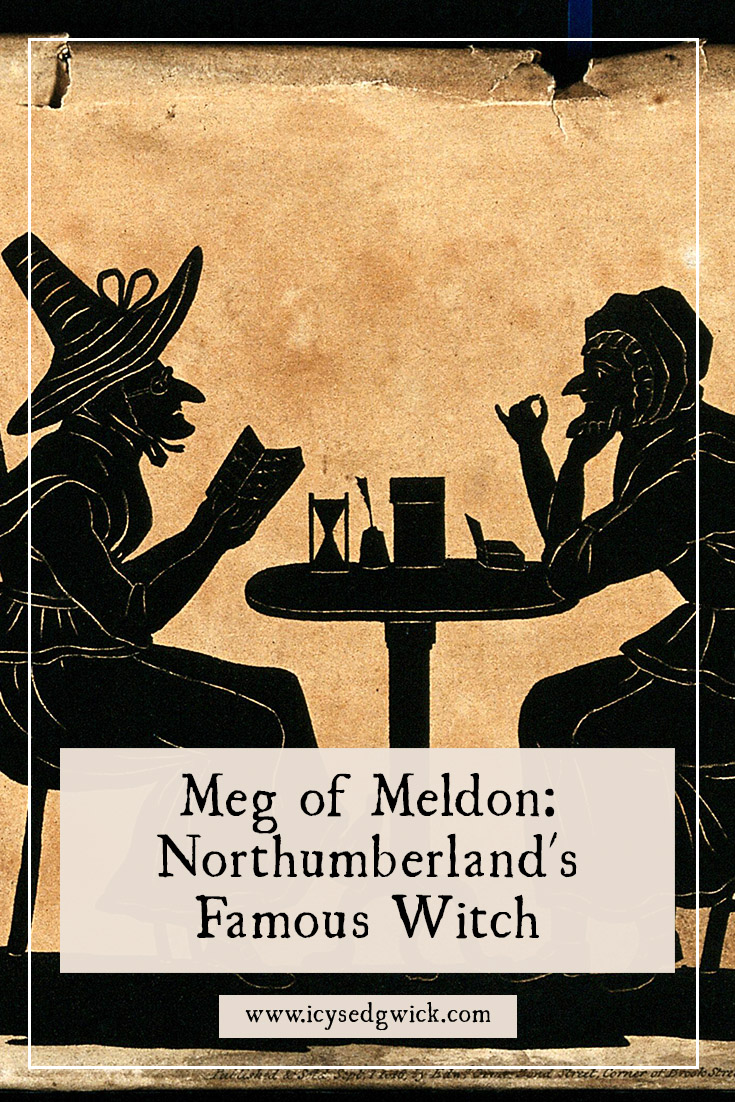 Meg of Meldon is Northumberland’s most famous witch. But was she really a witch, or just a hard-hearted businesswoman? Learn more here.

Her reputation preceded her, though as an unsympathetic and avaricious landowner, less so as a witch. So how did this member of the local nobility end up as the subject of such gossip? In many ways, her greatest crime was a slavish adherence to capitalism… so why did people think she practised witchcraft?

Let’s find out! Keep reading, or hit ‘play’ to hear the podcast episode of this blog post.

Who was Meg of Meldon?

Meg, otherwise known as the Maid of Meldon, was most likely Margaret Selby, born in 1570. She was the mother of Sir William Fenwick of Meldon. He made a name for himself as a royalist during the English Civil Wars and died in May 1652. Meg brought a fortune to her marriage to Sir William Fenwick of Wallington, although this fortune was tied up in Meldon, the ancient seat of the Heron family, which we’ll come back to later on.

One portrait of Meg existed, described by M.A. Richardson as being at Seaton Delaval in 1810. In it, she was depicted wearing a large-brimmed hat, and “a stiff gown turned up nearly to the elbows, with vandyked sleeve of linen; the whole shoulders were covered with a thickly gathered ruff or frill” (1843: 136).

She was famous in her day as being both a witch and miser, although it would appear that her activities with money received more censure than any actual witchcraft.

Was she really a witch?

Most sources refer to folklorist John Hodgson’s work from 1832. Writing so long after Meg’s death, it’s difficult to know how much of the account has been garbled over time. As M. A. Richardson pointed out in his 1843 Table Book,

“Hence it follows that where, in our own times, the people of a district have, from a period immemorial, given a name to a shadow, and marked out particular places for its haunts, the legend must in all probability have had some foundation in truth; but no pen having in due time enrolled its materials on the page of history, they may have undergone change in floating downward from age to age on the stream of popular tradition”

Rupert Matthews does note that one incident in 1614 may have been responsible for the first rumours. It’s important to note that her fortune was tied up in a series of mortgages and debts on various properties. The repayments for those debts provided her income (2009: 147). One such property was Meldon, the ancestral estate of the Herons, west of Morpeth.

When her husband died, the Fenwick estates were held in trust for the eldest of her seven children. Yet Meg wanted her own property, and she decided on Meldon Hall. Trouble was, she needed to dispossess the heir in order to claim the money. The head of the Heron family spent more than he earned, hence the mortgage on the property.

When the Heron heir was away on a trade journey, the head of the family died suddenly. His death may have been a coincidence, but Meg grabbed the opportunity and demanded an instant repayment of the mortgage. The heir didn’t have time to get a new mortgage and pay off the old one. Meg foreclosed on him and took the estate for her own.

Given the popularity of the young Heron, this made her very unpopular with the locals. People gossiped that Meg was behind the older Heron’s death.

Soon after, she seized Hartington Hall. Apparently, the owner didn’t abide by an obscure clause. Again, witchcraft accusations surfaced to explain her acquisition (Matthews 2009: 149). Even worse, the farming lands around Hartington and Meldon prospered, but their neighbours did not. Was witchcraft the cause of this too?

Matthews also suggests witchcraft could explain an apparent underground passage between Meldon and Hartington. He also notes that rumours persisted before her death, but nothing was ever proven.

Meg of Meldon does not rest easily

Meg was buried at Newminster Abbey, also near Morpeth… only she doesn’t seem to have stayed there. Soon after her burial, people began to see a beautiful woman flitting around the graveyard in a burial shroud. They saw a phantom black dog on Meldon Bridge. These, they claimed, must surely be Meg, back from the grave. She even took the form of lights and colours flickering over the river, which actually sounds quite charming.

Meg could be seen sitting on a stone coffin at the abbey. Apparently, people collected water from this trough and used it to cure warts and other complaints. I’m not overly sure why they ascribed healing properties to the water, given Meg’s lack of association with healing magic.

The beautiful woman left the abbey confines and could be seen accompanied by the black dog around Meldon and Hartington. The sightings continued for seven years and then appeared to cease. Hurrah! thought the locals. Meg has finally gone.

Only she came back seven years later. The locals believed that her practice of witchcraft condemned her to wander the earth for seven years and rest for seven, and so on.

One story saw a sceptic decide to dress in white and sit on Meldon Bridge to scare passersby, having heard this was a favourite occupation of hers. After making himself comfortable, apparently, Meg came and sat beside him. “You’ve come to fley [frighten], and I’ve come to fley, let’s baith fley together”, she said (Westwood 2005: 563).

Meg and the Treasure

Meg walked her rounds every night but mostly frequented the places where she’d supposedly hidden treasure. She’d abandon a location if anyone found the treasure hidden there. Indeed, the sudden assumption of wealth by some individuals was ascribed to the discovery of one of Meg’s caches. Others think the sightings of Meg only stopped because all her treasure was found.

The fact that Meg left property to her son William, but no actual cash, perhaps explains this claim. She always paid bills with physical money while alive, but the lack of physical wealth or even a bank account confused people (Matthews 2009: 149). No hoard of treasure ever turned up in either of her halls, so where did the money go?

According to the stories, she spent a lot of time guarding a well to the southeast of Meldon Tower. People believed a bull-hide full of gold lay somewhere in the well. One man apparently tried to retrieve it. He claimed he’d been told to go alone to the tower on a certain night at midnight. There, he would meet someone else and together, they would find the gold. There was only one condition. They must remain silent at all times in order to succeed.

The man naturally turned up at the appointed hour and encountered his assistant for the evening. With the use of a set of grappling hooks and a chain, the man entered the well. It turned out to be empty, having run dry some years before, and he found the hide of gold with ease. He fastened the chain around it and climbed back out of the well. The pair worked to raise the treasure, but just as the man grabbed the bag to haul it to safety, he cried “We have her now!” Presumably, the excitement was too much for him.

Sadly, it broke the spell, and the hooks and chain disappeared. The bag fell back down into the well, apparently never to be found again. The man’s assistant even changed, apparently becoming Meg herself. (Richardson 1843: 138). If we believe the rumours, the fortune would have meant the man was set for life, had he not spoken. M.A. Richardson notes how out-of-character this assistance in locating the treasure appears to be…if we assume the descriptions of her bad character are true, that is (1843: 139). Here, Meg apparently seeks to elevate the station of an ordinary man, rather than bequeathing wealth to those who already have plenty.

On another occasion, her treasure made itself available, though likely not through Meg’s intervention. She was the proprietor of the school house at Meldon and hid another cache of treasure in the roof.

One day, apparently in the early 19th century, the ceiling collapsed with the weight of her money. The master was out of the room at the time. Any boys who were present scrambled for their share of the loot. Richardson notes that one of his friends was there at the time and actually managed to grab two or three coins (1843: 139).

Local resentment may have played a role in the description of her as a witch. She bought produce like corn when the prices were low, and then sold them at a higher price when the market changed (Richardson 1843: 139). While this level of business savvy would be celebrated in the City of London, in 17th-century Northumberland, it marked her out as unpopular.

And yet while a man in her position would be merely unpopular, the locals applied the label of ‘witch’ to Meg. Richardson notes that there is nothing to justify the accusation in either her conduct or actions (1843: 139). He theorises that people looked at both her financial acumen and the level of influence that she attained and assume she must have been in league with the Devil (1843: 139). Naturally, had she attained the same level of influence and been philanthropic in her approach, the outlook may have been different.

I can’t help thinking that Meg was a shrewd and hard-hearted businesswoman… but not a witch. Nowadays, she’d probably run a tech empire or make questionable donations to political parties!

What do you think? Was Meg of Meldon a witch, or simply an unpleasant woman?