“Mirror, mirror, on the wall”… along with “Hubble, bubble, toil, and trouble”, they’re some of the most famous words associated with magic in popular culture. Mirrors play a huge part in many superstitions. Linked to ideas around the double, mirrors can be downright creepy. 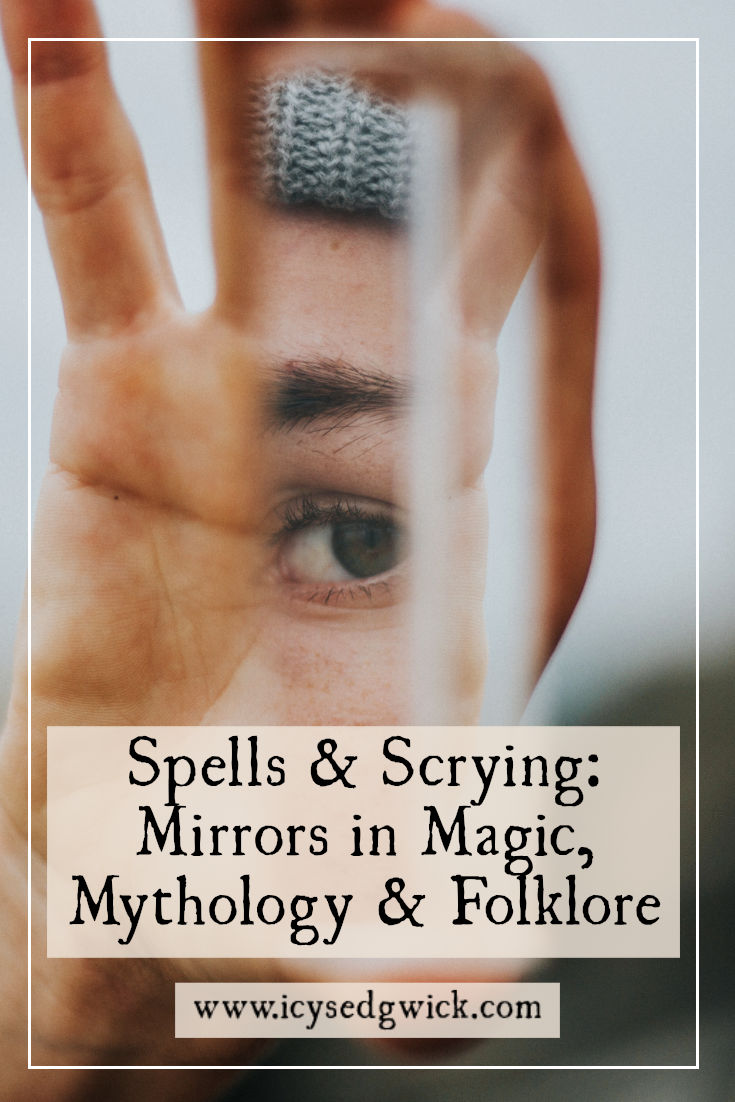 Look at the age-old practice of covering mirrors in a home where a death had occurred. People worried that the soul may become trapped in the mirror, unable to leave the house and pass on to the next world.

So with this creepy reputation in mind, what else can mirrors be used for? How can we use them to protect our home or tell the future? And how do they appear in myth and legend?

Let’s find out! Hit play to hear the podcast episode or keep reading!

Vulcan, the Roman blacksmith god of fire, made a magic mirror that showed the past, present, and future. He also made one for his wife Venus, goddess of love. She used it to hide her actions so she could carry on an affair with Mars, the god of war.

And we can’t forget Perseus, who used his shield as a mirror to defeat Medusa. No one could look directly at Medusa and live to tell the tale. The ‘rules’ say that you’ll be turned to stone if you meet her gaze. Instead, Perseus never looks at her, only her reflection.

The Aztecs used obsidian to make their mirrors. Their mythology featured Tezcatlipoca, Lord of the Smoking Mirror. He even wore a black mirror on his chest. As a god of communication, the mirror allowed his followers to talk to him (Morris 1993: 173).

Even Merlin had a magic mirror, although his only saw into the future.

Hanging a mirror opposite a door helps keep evil entities out of your home or office. Some people worry about things accessing their home through the mirror. The somewhat dreary horror film Oculus (2013) relied on that very point. If that’s you, draw protective symbols on the back of your mirrors. That stops evil forces using them for nefarious purposes.

Jacqueline Simpson and Steve Roud note the practice of covering a mirror in the home of a deceased person. This was first recorded in 1786 in Orkney, though many of the other records are in the northern counties of England (2003: 241). This was largely due to the belief that a person’s soul would become trapped in the mirror and be unable to leave. Some were so afraid of this that they even covered the “mirrors in the rooms of sick people” (Simpson 2003: 241).

Simpson and Roud also note the belief you should cover your mirrors during a thunderstorm. Apparently, this one only dates to 1900 but it would be fascinating to know the root cause (2003: 241).

Many people think breaking a mirror kicks off seven years of bad luck. The earliest reference to breaking a mirror being unlucky dates to 1777, but the ‘seven years’ time frame only appears in the mid-19th century (Simpson 2003: 241). The more prosaic explanation for ‘seven years’ is down to the high cost of mirrors. The ‘bad luck’ is how long it would take to save up to buy a new one in bygone years. Nowadays, they’re just a faff to clean up.

It’s not just breaking mirrors that brings bad luck. People considered it bad luck to let babies see themselves in a mirror, while young women who spent too long gazing in the mirror would see the Devil (Simpson 2003: 241).

Sophie Page explains that in the medieval era, people were considered too ‘unclean’ to speak to highly evolved beings like angels. They needed a device that blurred the barriers between the spiritual and physical realms. Mirrors were just one of those devices (2018: 45). Any shiny surface would do, though this makes it “difficult to identify medieval and early modern objects used specifically for magic” (2018: 46). One of the most famous is the obsidian scrying mirror owned by Dr John Dee.

But Page also notes the existence of a lesser-known magic mirror, the ‘Mirror of Floron’. This was a highly polished mirror of pure steel. You’d follow the prescribed ritual to trap the demon Floron in the mirror. Once you did, “the spirit [would] appear in the form of an armed knight seated on a horse and reveal everything about the past, present, and future” (Page 2018: 49). This was a form of divination, similar to necromancy, in which you sought answers from supernatural beings. This mirror came from Arabic magical traditions.

Scrying is perhaps one of the more famous ways magical people use mirrors. Doreen Valiente, in her classic Witchcraft for Tomorrow, talks about the “magic mirror” (1999: 89). Despite the name, it’s essentially a piece of glass with the back coated in black enamel paint. Other practitioners use the “traditional material” of Stockholm tar, the material used to tar the hull of old sailing ships (1999: 89).

Some people stare at their own reflection until they start to see images in the mirror. Others watch the reflection of flames. Anything to relax the mind. That’s the point when images and symbols begin to appear in the mirror.

How to Make a Magic Mirror

There are various methods for making magic mirrors. The most common one involves leaving a mirror out under moonlight overnight. Sprinkle a magical infusion of cold mugwort tea over the surface. Mugwort is a herb traditionally used to help boost psychic powers so it’s a good choice here. Keep it covered when not in use.

Want a dark mirror? Valiente recommends a concave surface, and you should clean it before you paint it. Three coats of your black substance should do the trick, but let it dry between coats (1999: 90). Valiente is very strict about not exposing the surface to light, which would “destroy the mirror’s sensitivity” (1999: 90). She also quite dryly points out it will also gather dust if you do. So keep your mirror in a box between uses.

Along with scrying mirrors, Valiente also discusses the use of ordinary mirrors. Here, she recommends the use of a mirror just big enough to reflect your face. Light candles, one either side of the mirror, and incense if you prefer. Then, concentrate on the reflection of your eyes. Visualise what it is that you want (1999: 91). Try to see it in the space beyond the reflected eyes. Whisper it three times and voila! You’ve cast a mirror spell. Just be careful what you wish for.

But if you break a magic mirror? No harm, no foul! Scott Cunningham advises you to collect the bits and put them in a jar, dust and all. Put it on your windowsill (pick somewhere sunny) and let it reflect negative energies away from your house (2003 [1983]: 119).

Mirrors often appear within protection magic. Maybe you feel you’re psychically under attack, or there’s just a lot of crap coming your way. Using mirrors in rituals can direct it back to the sender. Empaths often visualise themselves encased in mirrors to stop tapping into the energies around them.

You’ve probably seen the scene in The Mummy (1999) when they first enter the treasure store. Rachel Weisz’s character moves a mirror and it reflects sunlight from outside. Soon, a sequence of mirrors lights up the entire chamber.

Some think mirrors work in a similar way within spells. If you wanted to harness the power of the sun or moon, reflecting the energy would be a good way to concentrate it. Modern witches often use this to consecrate new tools before use.

According to Mickie Mueller, Persian folklore contains a practice for seeing ghosts using mirrors. Sit very still and comb your hair in front of a mirror. It doesn’t explain how to comb your hair without moving but there you go. Do this without speaking and you’ll see ghosts in the mirror (2016, p. 19). Maybe the mirror reflects your concentrated effort.

This is what you came for, isn’t it? Let’s get into mirror spells then.

If you’re going to use mirrors for magical purposes, don’t use ordinary mirrors around the house. Pick a special mirror and only uncover it during magical work. And don’t use regular cleaning products on it, either. Plain water (or a soft cloth) will do the job.

So what spells can you cast with mirrors?

Decide what it is that you need in your life. Be realistic, please. Choose a pair of candles in colours sympathetic to your goal. So green for money, pink for love, blue for healing etc.

Find a lipstick or a grease pencil. Draw something that represents your need on the mirror. Runes are handy for this but they’re a bit more advanced. A £ or $ would do for money. Or a heart for love. You get the idea.

This is the tricky bit. Try and draw it over where your face is in the reflection. Let your eyes unfocus slightly so your reflection and the symbol start to merge.

Close your eyes and visualise yourself with your need having been met. Obviously, be careful what you wish for. And don’t wish for something that is likely to cause harm to others.

Once you can see it clearly in your mind’s eye, cover the mirror and go and do something else. In the morning, wipe the symbol away. Then be patient!

I’ve found variations on this spell in various places, and it’s pretty basic. If you’re having a rotten hair day or you just want to look better, get yourself in front of a mirror. Apparently, any mirror will do.

Instead of focusing on how you look, visualise how you want to be seen. ‘See’ that instead of your reflection. If it helps, imagine yourself bathed in a golden light as well. Once you feel completely confident, away you go!

While that sounds obvious, it’s the fundamental point of the post. Mirrors reflect things, whether they’re things that are, things that were, or things that will be. Look at Perseus. He can only defeat Medusa because he sees a copy of her reflected in his shield. This saves him for looking at her directly.

But they also act as doors. Look at Tezcatlipoca, peering out of his obsidian mirror to speak to his followers. Or people covering mirrors to stop souls being trapped inside when a person passes on.

It’s up to you to decide if your mirror is a reflector or a portal. And choose wisely!

What mirror spells would you cast?