New Year’s Day is perhaps one of the longest-running days to be celebrated since we’ve had a calendar. Marking the end of one year and the beginning of another, it offers a secular reason for people to celebrate together. 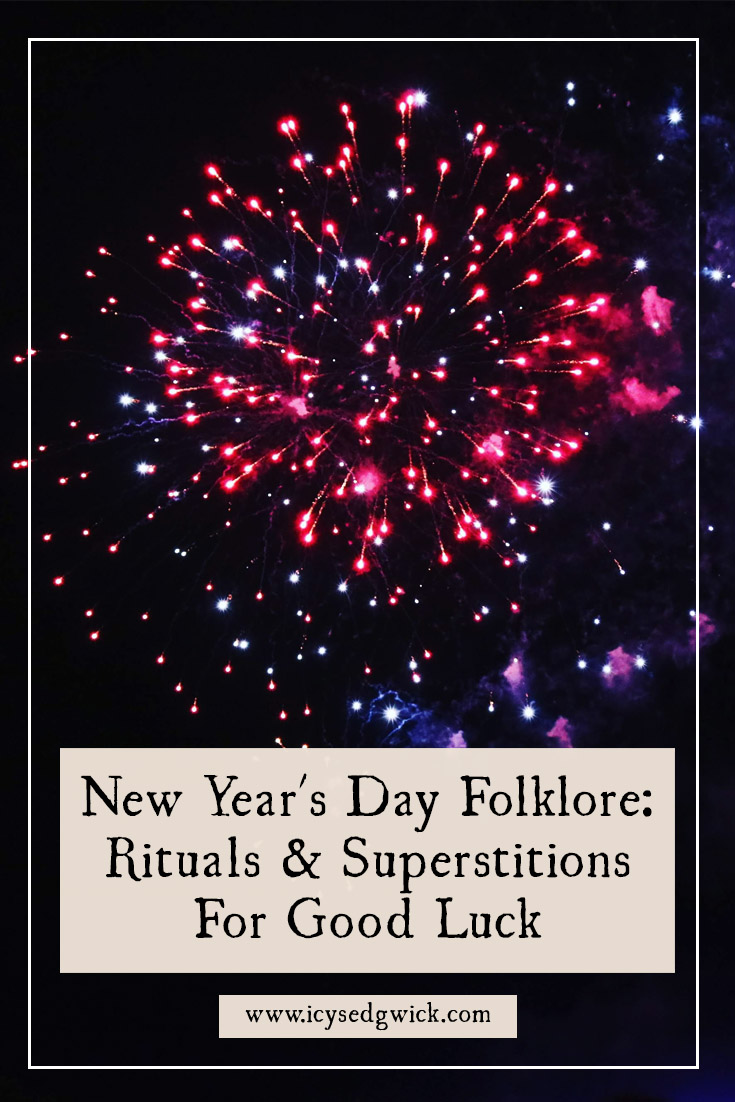 It’s been a time associated with gift-giving, visiting friends, and attempting to predict the fortunes of the year ahead. Unsurprisingly, it’s also been a time of rituals and superstitions designed to influence the coming year. From peering into the ashes and refusing to lend out items, to visiting orchards and noting the movement of the wind, we have plenty of New Year folklore to dive into.

New Year’s Day and the Calendar

In ancient Rome, the first day in the month was known as the Kalends. The Kalends of every month was sacred to Juno. It was the time when the Vestal Virgins tended the sacred fire in the Temple of Vesta (Grout 1997-2021). The month of January was named after Janus, the god of beginnings. In the Roman agricultural year, no hard outdoor work took place between the winter solstice and the rise of the west wind – which is December 21 until February 7 (Grout 1997-2021).

But New Year got a little more ‘pizzazz’ than other months because the Romans celebrated the Kalendae from 1-3 January. The Roman year originally began in March, to honour the god Mars, but from 153 BCE, the new year became 1 January (Hutton 1996: 2). This Kalendae was sacred to Janus, and the Romans marked the period with feasting, a gift exchange, and general merry-making (Hutton 1996: 3). While the Saturnalia perished in the face of Christianity, the Kalendae did not.

It’s worth noting that in 1155, the English Crown moved the start of the year back to 25 March. In 1752, when the calendar changed again, New Year returned to 1 January (Hutton 1996: 8). Despite this, Ronald Hutton does note that people continued to observe New Year’s Eve and Day on 31 December and 1 January, despite what the official calendar said. By the 1720s, exchanging presents at New Year was a common custom (Hutton 1996: 23).

People once held feasts at New Year in the medieval period. They also celebrated New Year as part of the Twelve Days of Christmas—New Year’s Day falls on Day 8 (Simpson 2007: 259). In England, beyond setting New Year resolutions and attending parties to ‘see in the new year’, 21st-century celebrations are somewhat muted.

I’m not going to cover the tradition of first footing here as I’ve covered it elsewhere. But we will take a quick look at how people greeted the New Year.

An old New Year’s greeting from Cleveland in Northern England ran thus: “I wish you a merry Christmas, And a happy New Year, A pantry full of roast beef, And a barrel full of beer!” Young men often called it through their neighbour’s keyholes on New Year’s Day (Henderson 1879: 75).

Ringing in the New Year with literal bells is also a custom. Twelve bells were added to the belfry of St. Paul’s in 1878. People gathered to hear them ring in their first New Year that year. Crowds began to gather every year and thus a tradition was born (Illustrated London News 1897: 3).

The focus moved from St Paul’s to Trafalgar Square after the Second World War. In recent years, it’s moved down to the Thames for the fireworks display. Even this was curtailed due to the COVID-19 pandemic, with the display moved to the Millennium Dome to ring in 2021.

The term ‘Hogmanay’ is most associated with Scotland, though it is also used in northern England. The earliest written use of the word comes from Yorkshire in 1444 (Simpson 2007: 258).

Between the 15th and 17th centuries, there was an emphasis on visiting people and giving gifts at New Year. The gifts outside of the nobility were more modest, such as papers of pins or oranges studded with cloves (Simpson 2007: 258). Visiting involved groups of men going door-to-door on New Year’s Eve and singing to receive gifts (Simpson 2007: 258). This happened in northern England as much as Scotland.

But then the Puritans banned Christmas in 1645 as a Catholic invention. How dare people enjoy any festivities or frivolity! The people responded by moving the celebration to New Year, which was a secular point. The Restoration saw Charles II reinstate Christmas, although the Scottish Kirk removed it again between 1688 and 1690. This explains why Scotland favours Hogmanay and England favours Christmas (Simpson 2007: 258).

The New Year and Luck

The start of a new year was the ideal time to set the tone for the coming year. Many of the rituals and superstitions involve luck.

In Rome, no one allowed anyone else to take fire or anything made from iron out of their house on New Year’s Day. Nor would they lend anything on that day (Henderson 1879: 74). You could bring things in, but not let things out, in case you gave away your good luck. William Henderson relates that this belief was still very much alive in County Durham in the 19th century. It was so strict that even potato peelings and ashes from the fire were kept until the following day to be thrown out (Henderson 1879: 74).

Even in the 19th century, it was considered bad luck to let the fire go out on New Year’s Eve, and neighbours were unwilling to give anyone a light in case they gave away their own good luck (Henderson 1879: 72).

Whoever drank the last glass of wine from the bottle on New Year’s Eve/Day got the ‘lucky glass’. This brought good fortune, and if an unmarried person drank it, they’d be the first to marry in the coming year (73).

People might carry fire around their fishing boats in the harbour to both purify them and protect them from witches (Reader’s Digest 1973: 73). In the 1770s, people in the Highlands burned juniper around their cattle on New Year’s Day to purify them (Hutton 1996: 42). It was even unlucky to work in mines in Cornwall on New Year’s Day (Reader’s Digest 1973: 140).

There are two types of wassailing—house visiting, or orchard visiting. No one knows if orchard wassailing came from a pagan practice, or developed from the house-visiting practice of wassailing.

Jacqueline Simpson claims the earliest reference to orchard wassailing dates to 1486 (2007: 380). That said, Ronald Hutton states it first appears in writing in 1585 in Kent (Hutton 1996: 46). In terms of orchards, New Year was the ideal time to do this practice although the date varies between New Year and Twelfth Night.

Groups of people visited their local orchards to encourage a good crop. They’d sing songs, beat the tree trunks with sticks, splash the roots with cider, and put cider-soaked toast among the branches. There was lots of cheering and singing to help encourage the trees.

As you can imagine, plenty of divinatory practices surround New Year as a way for people to see what the coming year had in store for them. I should note that neither the phrase nor custom of first-footing has been found before 1800. Most of the divinatory practices only date to the 1850s (Simpson 2007: 258).

A popular choice was bibliomancy involving the Bible. You simply let the Bible fall open and read the first passage you see for clues as to the coming year (Simpson 2007: 257).

Other people might look for telltale shapes in the ashes of a household fire (Simpson 2007: 257). I have an article explaining four less obvious forms of divination if you’d like to try one of them!

Also, if you’re single, pay attention to the first person you see of your preferred gender on New Year’s Day. Their first name will be the first name of your future partner (Henderson 1879: 73).

Finally, the weather was a large part of New Year’s Day folklore. The direction the wind blew on New Year’s Eve was significant since it seemed to indicate the fortunes of the following season.

If New Year’s eve night wind blow south,
It betokenth warmth and growth;
If west, much milk, and fish in the sea;
If north, much cold and storms there will be;
If east, the trees will bear much fruit;
If north-east, flee it, man and brute.

In Buckinghamshire, another saying foretold that:

Of course, in some areas, people like to bring in the new year in a slightly more spectacular fashion. Those in Allendale, Northumberland, favour a fire festival, as described by Jacqueline Simpson and Steve Roud (2007: 4). On New Year’s Eve, men in costumes visit the pubs in the town before gathering just before midnight. They assemble their ‘barrels’, which are actually the 12″ deep end of a barrel. They fill these with wood shavings and paraffin and set them alight. The group carry these lit barrels in a procession behind the town band, following a route through the streets until they return to the marketplace. Venetia Newell explains that they originally used tar, but switched to paraffin in 1970 (1974: 94).

Once there, they use some of the barrels to light the unlit bonfire at the stroke of midnight. Everyone present sings Auld Lang Syne before dispersing, and the men go first-footing. Some of the barrels are doused and kept until the following year. Newell described the process in 1974, explaining that barrel carriers needed to be male, and born or brought up in Allendale (1974: 94).

No one really knows how old the tradition is. The Visit Northumberland website claims the ceremony “has been celebrated for centuries”, but records involving the barrels only date to 1858. Apparently, the tradition originally used candles and it grew out of Methodist hymn singing (Newell 1974: 99). The candles kept blowing out, so the switch to the lit barrels meant the procession could better withstand the wind. Strangely, there was no mention of the procession from 1864, when the local paper was founded, until 1883 (Newell 1974: 98).

What should we make of New Year’s Day folklore?

It’s understandable that people would want to improve the tone of their coming year. Having a range of rituals to bring in good luck or predict fortunes is a way to impart a sense of control over the next 12 months.

That said, the human concept of time is largely man-made. We can already see how the calendar has shifted over time, which makes the choice of 1 January somewhat arbitrary. It’s easy to see why some people prefer to see 21 December as the start of a new year since it marks the start of a new season.

Many of the practices are entirely harmless so if they give you a sense of peace or contentment about the coming year, then great! But just remember, if your divination doesn’t give you the answer you hoped for…life still has a funny way of throwing curveballs at you!

Henderson, William (1879), Notes on the Folk-Lore of the Northern Counties of England and the Borders, London: W. Satchell, Peyton & Co.

Hutton, Ronald (2011), The Stations of the Sun: A History of the Ritual Year in Britain, Oxford: Oxford University Press.