How many times have you walked past a row of houses, counting the numbers as you go? In the UK, the even numbers are often on one side, the odd numbers on the other. 7, 9, 11, 15 – what? What happened to number 13? 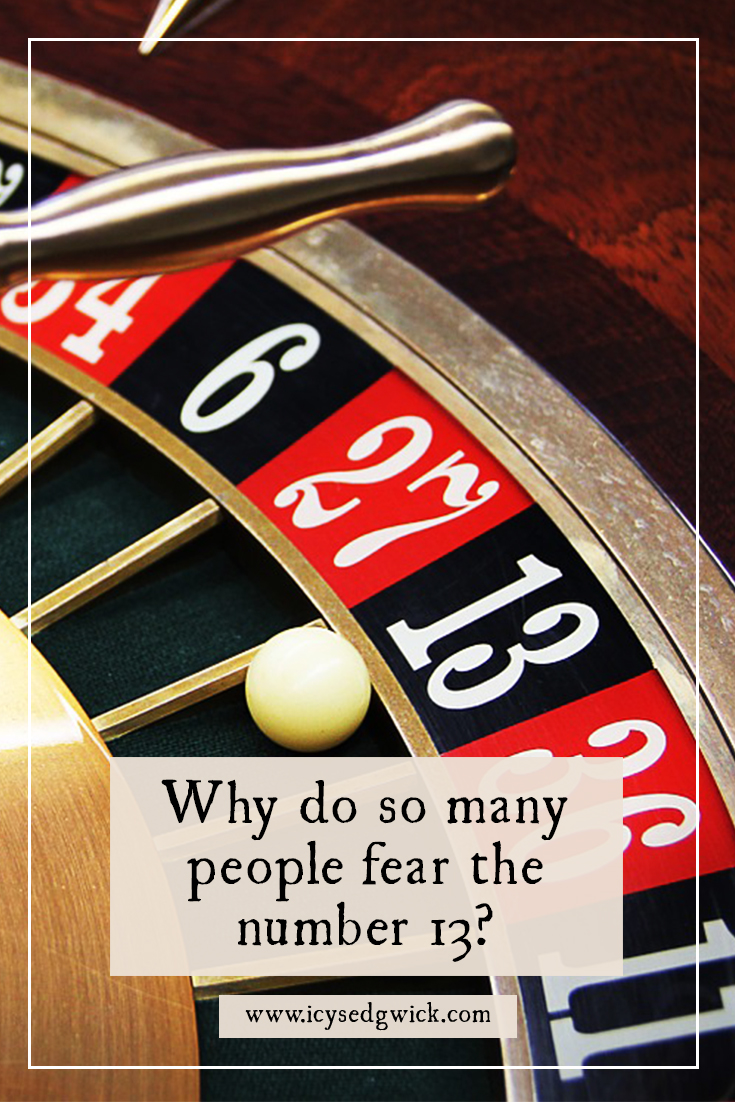 It’s weirdly common for builders to skip 13 when they number buildings. Or floors in high-rise office blocks. Airports sometimes don’t have a gate 13.

It all comes from a fear of the number 13. At its most extreme, this fear is called triskaidekaphobia.

The fear of Friday the 13th is called paraskevidekatriaphobia. Many people avoid getting married, travelling, doing business, or even working on the day.

So far, so bonkers. Want to find out where the fear of the number comes from? Hit play below to find out – or keep reading!

I read more than a few sources than cite the number 12 as a “perfect” number. 12 signs in the zodiac, 12 apostles, 12 days of Christmas, etc. We got our use of 12 in relation to time from the ancient Sumerians. (12 months in a year, two 12-hour periods in the day).

As a result, some argue 13 is a ‘bad’ number because it follows such a perfect number. It’s essentially trying to improve on perfection.

So what are some of the more common beliefs about it?

Plenty of sources cite the Bible as the origin of the fear. There were apparently 13 people at the Last Supper. Some versions of this story say Judas took the last seat, others say it was Jesus. Either way, things didn’t end well – so the number must be unlucky.

This is not dissimilar from a tale from Norse mythology, involving the god Loki. 12 gods met for dinner and Loki gatecrashed the event. The beloved god Baldur ended up dead following Loki’s arrival, forever marking ’13’ as unlucky.

Vincent Foster Hopper points out that 13 was associated with Epiphany “and appears not to have been considered other than holy by any of the medieval number theorists” (2000: 131). This implies the unlucky 13 connection didn’t come from numerology at first.

Hopper points to Petrus Bungus as the first to point out the evil associations with the number. Bungus “records that the Jews murmured 13 times against God in the exodus from Egypt” and “that the thirteenth psalm concerns wickedness and corruption” (Hopper 2000: 131).

So if the fear didn’t emerge until the Middle Ages, you can hardly say it came from the Bible.

Thankfully, not everyone believes the superstition about it being unlucky for 13 to sit down to dinner. The Thirteen Club did everything possible to flout superstitions. Even Theodore Roosevelt became an honorary member.

The club held their first meeting on Friday 13 January in 1882, at 8:13 pm. They even met in room 13. They walked under ladders, ate a meal of thirteen courses, and even opened umbrellas indoors.

12 months later, the club secretary happily reported that the members of the club were all alive and well.

Having such fear of the number, it’s hardly surprising it would have so many links with death. Some people think the gallows had 13 steps. There’s no evidence that this was the case.

There’s also a belief that in Britain, Friday was the day chosen for most public executions. So Friday 13th would be super unlucky. Or would it? These events were treated like festival days. People turned out to watch the day’s events the way we attend music festivals now. So it was only really unlucky for the condemned.

Richard Webster highlights some strange superstitions around Friday 13th. You shouldn’t cut your hair on that day or “someone in your family will die” (2008: 254). Don’t wear black on that day or you’ll have to wear it again for a funeral.

There’s even a link between the number and a massacre. If you’ve seen The Da Vinci Code, you’ll have heard of the Knights Templar. These knights ended up with too much power and often loaned money to European kings. Philip IV of France lost his war with the English and decided he wanted to avoid paying his debts. He and Pope Clement V charged the knights with Satanism, then had them rounded up and murdered. It started on Friday the 13th in October 1307.

If you’ve got 13 letters in your name, you might be cursed. Plenty of serial killers have 13 letters in their name, like Jeffrey Dahmer, Jack the Ripper, Theodore Bundy. But that’s hardly proof.

After all, former US President Woodrow Wilson apparently found the number lucky. He dropped his first name Thomas so people would only call him Woodrow Wilson. To save you counting, that name has thirteen letters (Webster 2008: 254).

Obviously, women don’t escape from being the “13 is bad” belief. One theory is that women menstruate 13 times a year – although that depends on whether you consider menstruating “bad luck” and also what your natural cycle is.

The other common belief is that a witches’ coven had 13 members. Given many ‘confessions’ were obtained under torture, it’s hard to give their contents much credence. And the ‘coven’ persecuted by King James I in North Berwick involved over 70 people. Not 13.

Is it an Irrational Fear?

It’s even more confusing when you consider non-western cultures have no problem with 13. In Asia, the unlucky number is often number 4, since the words for ‘death’ and ‘four’ are very similar.

The fear becomes even more irrational when you realise the positive side to the number. There are 13 lunar cycles in a year. And Richard Webster also points out the groups of thirteen objects on the United States’ Great Seal: 13 stripes on the shield, 13 arrows, 13 olive branches, 13 stars (2008: 254).

When it comes to Friday 13th, there’s even less evidence as to why people find it unlucky. Steve Roud explains that printing presses released almanacs from the seventeenth century (2006). They included information about dates, but curiously, none of them highlight Friday 13th as unlucky.

He also points out that the number 13 being seen as unlucky only dates to around 1852 (2006). By comparison, the superstition around having 13 at a table appears in the 1690s. So the specific belief is older than the general idea about the number.

Roud also explains that Fridays “have been regarded as unlucky since medieval times” (2006). It wouldn’t take much for people to conflate Fridays and the number.

Why do people still think the number is unlucky?

Put simply, no one actually knows why the number 13 is considered bad luck. We can guess, and explore some of the superstitions, but if anyone gives you a definitive answer?

Take it with a pinch of salt. And then get really superstitious and throw some of the salt over your left shoulder.

This is part of the problem with folklore. If I include a version of a story you haven’t heard? It doesn’t mean I’m wrong. It just means I’ve heard something different from you. No one knows which version is “true”, so no one is really right, and no one is really wrong.

And people react really badly to Friday the 13th in particular. Which could explain why so many bad things happen, especially if people are walking around expecting something to go wrong. Pop culture certainly doesn’t help.

Many gamblers actually consider the number 13 to be lucky. Though that could be because fewer people put money on it, making it less competitive.

But I think we can actually look to the tarot for a bit of a clue as to how to handle the number. The 13th card is the Death card. So far, so spooky. Or is it? Because this card rarely predicts an actual death. Instead, it’s more about transformation or metaphorical death.

So if you draw the Death card, it might mean you’re going to give up smoking, change your job, or end a relationship. Instead of seeing 13 as an unlucky number, see it as a chance to make a change in your life!

What do you think? Is 13 an unlucky number for you?

Sign up below and get my guide to protecting your home with folklore. Or get exclusive podcast episodes by supporting Fabulous Folklore on Patreon.

Roud, Steve (2006), The Penguin Guide to the Superstitions of Britain and Ireland, London: Penguin.