A few weeks ago, we headed to Manchester to explore a story related to Dr John Dee. In that post, I mentioned a tale involving a group of psychogeographers and their attempts to contact the good doctor’s spirit. I asked if anyone wanted a post about psychogeography as a practice. People said yes, so here it is! 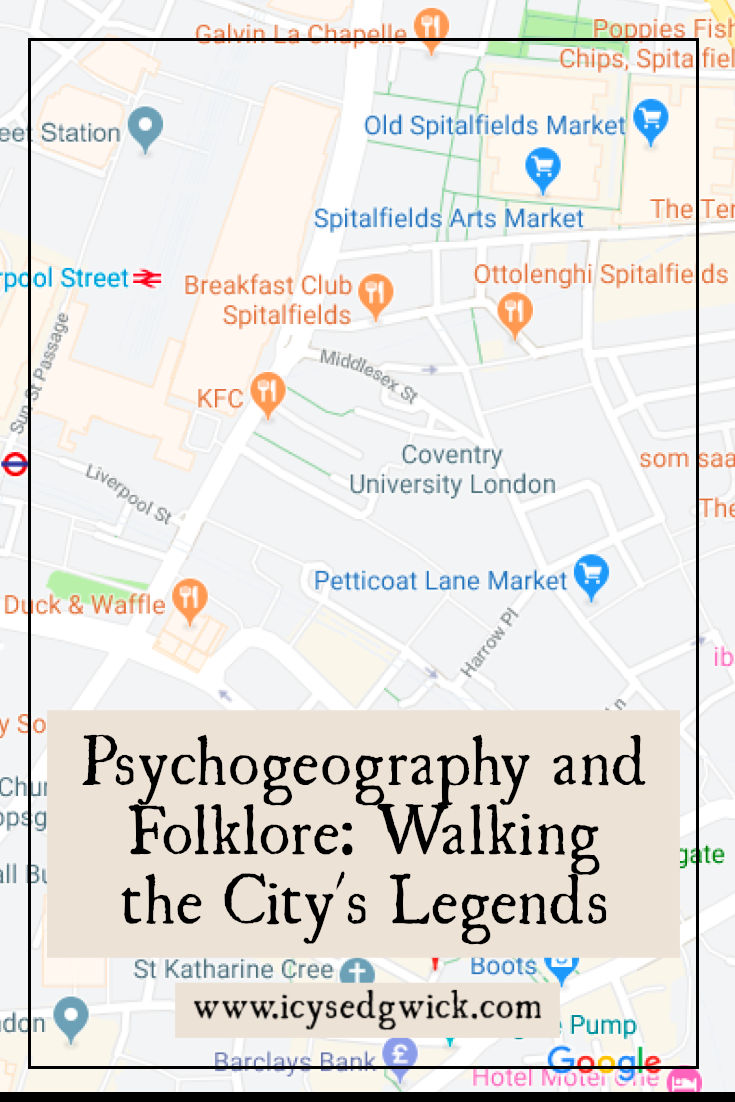 We’re going to be walking the city in this post. So put on your most comfy boots, pack a drink and a snack, and let’s explore this fascinating way to encounter the landscape and it’s folklore…

As always, hit play below to listen to the post. Or keep reading!

It’s not the easiest of terms to define. Over the years, it’s taken on a whole range of meanings. Academics describe it one way, practitioners another. Some of you reading this will probably disagree with the way I describe it. If you do, just remember there is no one way to practice it.

The term ‘psychogeography’ can be traced back to 1950s Paris (Coverley 2010: 10). Guy Debord, part of the Situationist movement, tried to make it a legitimate term. In essence, it describes the point where psychology and geography meet. It’s “a means of exploring the behavioural impact of urban place” (Coverley 2010: 10).

In other words, psychogeographers look at how people behave based on the space around them. And yes, there is a link with folklore. We’ll get to that.

Chris Rose further explains the focus on emotion, and that there is “an emphasis upon walking, paying critical attention to the (generally but not exclusively) urban landscape and the power structures that have shaped it” (2016). The “paying attention” bit is key here.

Will Self notes that “[s]ome see psychogeography as concerned with the personality of place itself” while others pursue “minutely detailed, multi-level examinations of select locales” (2013). So some psychogeographers might focus on a whole area in a city. Others pick a specific location and do more of a cross-section of it.

Many look back to the flâneur of 19th century Paris for the true origins of psychogeography. Charles Baudelaire coined the term to describe men who observed the city as they strolled around it. They were usually intellectuals and independently wealthy, so they had the leisure time to do this.

The surrealists also got involved. Their practice of automatic writing turned into a form of walking. You simply walked governed by where you were ‘led’ to walk by your unconscious.

But this is barely scratching the surface. There’s no specific ‘method’ for doing psychogeography. Different people practice it in different ways. And for very different reasons.

Tina Richardson points out that “urban walking” has a whole range of things to look out for (2015). These walkers might explore spaces as they appear during the day compared to the way they appear at night. Or during different weather conditions.

I don’t want to go into the different theoretical approaches. Or even the history, because there are books like Merlin Coverley’s title that cover this in depth.

What we’re going to talk about is how you do it and how it ties in to folklore.

So how do you actually DO psychogeography?

First, you walk. You do not drive. Rose explains this is because walking gives you the chance to look, think and explore (2016). You’re not just going for a nice stroll. Psychogeographers actively pay attention to the world around them. But they also have their stroll without planning a route or even having a destination in mind.

So you might decide you’re going to explore part of your hometown. I’m in Newcastle so I might decide to leave the dim confines of the Metro system at the Haymarket station. I choose a direction to leave the station, then simply walk.

While walking, I pay attention to what’s around me. I might make notes, or I might take photographs. I might even choose to focus on a specific thing, like the signs I see on the way.

You might just get on the first bus outside your house. Count fifteen stops and get off. Then start walking.

Or just go to Venice and try to find your hotel without using Google Maps. Good luck.

Basically, however you want to do it is right. Tina Richardson explains that “[i]t is the psychogeographer who makes psychogeography happen” (2015).

So far, I’ve focused on the subject in terms of its urban heritage. Coverley notes in the introduction of the 2018 re-issue of his 2006 book on the topic that psychogeography was once preoccupied with towns and cities (2018). London, in particular, became overly studied. By the time of the re-issue, this urban focus “has been eclipsed by a growing preoccupation with the ‘wild places’ of the natural world” (2018).

Because nature writing is nothing new, Coverley tends instead towards the “indistinct borderlands” at the edge of the urban landscape. Neither rural nor urban, they attract psychogeographers precisely because they’re neither one thing nor the other.

In an interesting twist, many ghost stories crop up in these ‘in between’ places. In the field of Gothic Studies, they’re known as ‘liminal spaces’. Sunrise or sunset are liminal times because they’re on the cusp of two distinct states. Places can do the same thing.

How does psychogeography link with folklore?

Because of the intense focus on a small area, psychogeography can tip into local history. The psychogeographer either knows what was there before and looks for signs. Or they see the signs first and work backwards to research what they mean.

The deep penetration into an urban area’s past uncovers its legends, superstitions, and quirks. All of which pop up in its folklore.

Rose makes a lot of connections between psychogeography and psychotherapy. In particular, “What is said is linked to where it is said” (2016). Here, psychotherapy explores the impact of the environment on a person. Which isn’t so different from psychogeography. And, incidentally, folklore.

Now this is just personal opinion. But space and place are both so important to folklore. Granted, the same stories often emerge in different locations. Look at Jenny Greenteeth, appearing in a host of ponds and rivers around the UK. Or countless Grey Lady ghosts, often with the same backstory but haunting different spaces.

But then there are the deeply specific stories. The legends so intrinsically tied to place that you can’t go there without being aware of the links. Why are selkie stories so tied to the North Sea lands? What is it about these places that makes the stories appear here?

As Rose points out, “it becomes even clearer that not only who we are is profoundly shaped by place, but that place involves power” (2016). By doing psychogeography, we become aware of place and power in equal measure. And the folklore is often tied to both.

It’s all about place.

You can’t do psychogeography without looking at the idea of place. That’s why it has ‘geography’ in the name. And it’s the folklore or legends that often make a place special.

Or is there more to it than that? The Romans believed in the genius loci, or the spirit of a place. For the Romans, it was a protective spirit tied to the area. Is the practice of psychogeography an unconscious attempt to encounter this genius loci?

Incidentally, the flâneur first emerged in Paris during a period of urbanisation. The city landscape changed to incorporate new forms of shopping, transport, and architecture. The observation of the city coincided with a period of rapid change. These new symbols of ‘modernism’ swept away older legends and superstitions, uncovering these stories in the process.

To give you an example, John Clark notes the existence of a so-called medieval phrase associated with the London Stone (2010: 38). According to the myth, this stone must remain in the city, otherwise it will fall.

So long as the Stone of Brutus is safe,
So long will London flourish

It’s even quoted by Peter Ackroyd, Jennifer Westwood and Jacqueline Simpson. Yet Clark notes it only dates to 1862 (2010: 38). Either way, it inextricably links this piece of stone with the founding myths of London. A place in the City draws its power from a chunk of rock associated with folklore.

This in itself is the crossover between the fields. You have these places that have some sense of power, and there’s usually a legend or superstition associated with them. By doing psychogeography, you expose the folklore.

And then there are the links with the occult.

Thanks to Alan Moore’s From Hell, many people showed renewed interest in particular sites around London. Here, occult history emerges out of the urban landscape through signs and symbols most people would ignore.

But not psychogeographers. Their intense focus on an area leads them to pay more attention. Architectural foibles take on new significance.

The Bohemian Blog even refers to From Hell as “a study not of stones, but rather a very personal exploration of the meanings etched into them”. Their comprehensive blog post follows the routes on the map between significant locations in the graphic novel. Seeing them in this light helps draw new connections between the sites.

The Value of Psychogeography for Folklore

Remember, all ‘occult’ means is hidden. This is really the key to linking psychogeography with folklore. It’s a means of teasing the hidden back into plain view. We can uncover these lost stories and forgotten legends. And maybe breathe life back into the old figures that once walked these streets beside us.

So next time you’ve got a spare half hour, give it a go. Walk somewhere familiar with fresh eyes. Or choose somewhere unfamiliar, armed with curiosity (and your smartphone, sadly safety is still your priority). And let me know what you find!

Have you done psychogeography? Will you give it a go? Let me know below!

Rose, Chris (2016), Walking together: psychogeography and psychotherapy, sketching, psychotherapy and beyond. Accessed 28 August 2019.

Self, Will (2013), Psychogeography, London: Bloomsbury.