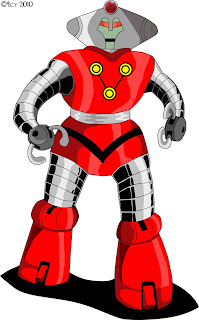 I’ve been trying to come up with new ideas for fiction, and I remembered reading Zoe Westhof‘s eBook guide to having a creative mini retreat to boost your creativity. I still haven’t managed to find the time to set aside an entire weekend, but I decided to grab some spare time where I had it, and do some drawing. I used to love drawing, but after I finished college and was no longer studying art, my drawing became somewhat sporadic. It’s a shame, since it’s something I really enjoy doing, so I’ve decided that, in an attempt to jar my brain from seeing things the way I normally see things, that I’ll draw more often to make me look at things in a new way.

So I ended up drawing a robot. I’ve never really coloured things in using Photoshop before, but all in all I’m pretty pleased with how he turned out! I’ve always been much better at drawing mechanical things, or structures, than anything organic, so you never know…perhaps I’ll end up writing a spate of robot-themed futuristic sci-fi, with illustrations to match?