There’s been a lot of confusion between sirens and mermaids since the Middle Ages. Many of the images show gorgeous women with fish’s tails. Or creatures with beautiful voices capable of bewitching men. 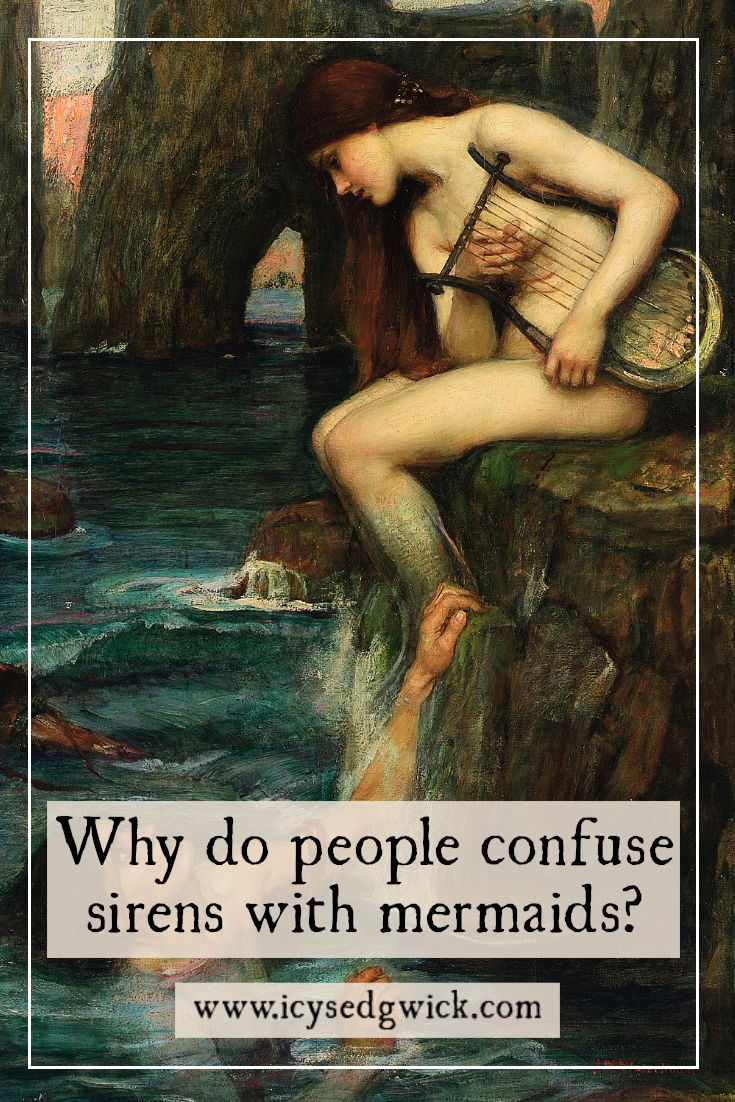 Look at Ariel in The Little Mermaid.

But it’s far from their Greek origins. And the siren/mermaid confusion only really starts when medieval scholars started reading ancient Greek texts. Mermaids have kept the siren’s voice. But the original siren has disappeared from view.

We’re going to go and meet her! But, you know, carefully. As ever, hit play below to listen to the podcast episode or keep reading!

Who were the sirens?

The original sirens were actually bird-women on a remote Greek island, sometimes named as Anthemoessa. In some depictions, they had clawed feet, and in others, they had wings. But originally, they weren’t shown as being overly beautiful.

It wasn’t their physical charms that lured sailors to their death. Unlike mermaids, who might lounge on a rock and encourage sailors to swim to them, only to drown them. Hearing a siren’s song proved dangerous since it bewitched the listener and made them forget their human life. If the listener was steering a ship, he might forget what he was doing. And the ship then wrecked on the rocks.

There aren’t many stories that show the sirens attacking humans. The song may not have been intended to lure them closer. But we’ll come back to that!

But their island is usually described in fairly grisly terms. Decomposing bodies lie all over the place, mixed with bones bleached by the sun. The illustration from the Victorian poem above shows a skull lying on the sand beside the siren.

The Sirens and Demeter

In one popular version, they were the goddess Persephone’s mortal handmaidens. They sang to her and accompanied her to pick flowers in the meadows.

But then Hades kidnapped Persephone. Demeter gave the girls golden wings to help them search for her. Obviously, they couldn’t find her since she was in the underworld, not above ground.

Demeter blamed the girls for not finding Persephone. She exiled them to their island and cursed them. They’d be stuck in their bird form until someone could pass their island without stopping. With the lure of their songs broken, they would die.

The above illustration from 1690 gets the origin right (Proserpina is Persephone’s Roman name) but the siren form wrong.

The Sirens meet the Muses

Eventually, the goddess Hera decided to visit them. She wanted to hear if their songs lived up to their reputation. When she found they did, she decided to set up a singing contest between the sirens and the muses.

It wasn’t a fair competition since the muses were the goddesses of music. Naturally, the muses won. But they added insult to injury by stealing the sirens’ feathers to make victory crowns.

The sirens returned to their island, humiliated and rejected again. This legend also ignores the competing myth that one of these muses was the mother of the sirens.

Wu Mingren points out that some of the images show sirens as birds with human heads. This looks a lot like the ba from ancient Egypt, which is a bird with a human head. It’s also represented the human soul’s mobility, allowing the soul to leave the tomb. The image entered Greece and gathered new stories to explain it since the belief systems were different.

Asher Elbein also notes that birds in the Mediterranean were often linked with “hidden knowledge”, and had a somewhat otherworldly nature (2018). Given the apparent prophetic nature of the siren song, their links with birds would make sense. Birds often carried souls to the underworld, which is a fascinating point given Persephone’s later role as a ruler in the underworld.

Odysseus and the Sirens

Perhaps the best-known encounter with the sirens appears in Homer’s The Odyssey.

During his odyssey, Odysseus learned about the power of the sirens from Circe the sorceress. He gave beeswax to his sailors to plug up their ears. But he wanted to hear their song (and survive), and since he was passing their island, why not try?

The sailors tied him to the mast and plugged up their ears. When the ship got in range, the sirens began their song. They heaped praise on Odysseus and he became possessed by an urge to meet them.

His sailors couldn’t hear his pleas to be released. They safely passed the island, and the enchantment faded. Odysseus had managed to hear their song and survive. But the sirens did not. Demeter’s curse fulfilled, they threw themselves into the sea.

As a side note, this painting by John William Waterhouse caused an outcry in 1891. The National Gallery of Victoria bought the painting, but critics couldn’t understand why he’d painted the sirens as winged predators and not glorious maidens basking on rocks. It just goes to show how pervasive this image of sirens as mermaid-like creatures was, even in the 19th century.

Nine years later, Waterhouse painted the below version of ‘The Siren’. It seems he’d listened to the criticism and went for a more conventional representation.

Orpheus and the Sirens

According to myth, Odysseus wasn’t the only one who avoided problems with the sirens. In the stories about Jason and the Argonauts, they also had to sail past the island.

Thankfully, they had the legendary musician and poet Orpheus with them. He started playing his lyre when they sang their song. His music drowned theirs out and the Argonauts sailed safely past.

The sirens only managed to bewitch a single Argonaut. He jumped overboard to swim to their island. But Aphrodite intervened and either plopped him in Lilybaeum (now Marsala) or took him as a lover. The stories vary!

Why does the siren sing?

Some believe the songs avenged the sirens for the wrongs done to them. Given Demeter’s curse and Hera’s exploitation of them, they have a point.

There’s also a theory that the sirens were lonely and wanted human company. So they sang to ‘invite’ the sailors to join them. It’s possible the men died of starvation, not after being killed by the sirens. Much like the stories of mermaids who drowned sailors by accident, the sirens don’t think about the needs of the sailors.

Others think they might have sung the songs out of grief for their fate. And they even told Odysseus that they knew all of the sadness in the world, and they knew everything that was to happen. The only way to handle this level of pain and foresight was to share it with others.

Pietro Pucci points out that the sirens ask Odysseus to stop “so that he may enjoy their song and return wiser. For they know the god-sent toils the Argives and the Trojans suffered in war and they know each time whatever has happened in the world” (1998: 1).

But why does the representation of the siren change?

The Evolution of the Siren

When we get to the 1st century BC, sirens had full female bodies but they’d kept their wings. Which is probably closer to the Demeter myth, where the handmaidens asked for wings to help their search for Persephone.

Once we get to the Early Modern Period, European scholars had the ancient Greek texts, but not the images that went with them. Without the artistic depictions, the scholars had to work out what the vague descriptions meant.

They already had some clue of what mermaids were supposed to be. So they conflated the two, superimposing the siren onto the mermaid. And by the 19th century, writers had access to tales such as that of the water nymph Lorelei, who lured men to their death on the Rhine.

Nowadays, they’re remembered in this way, as vicious water nymphs whose sole goal is to tempt men. They’ve basically had their agency stripped away in favour of making them physically attractive, and purely intent on attracting men. But in the original myths, their prophetic songs and phenomenal voices were far more impressive than their physical beauty.

What do you think of the sirens? Were they monsters or misunderstood? Let me know below!