The common images of spinning in folklore reflect its status as both a craft and form of industry. Most cultures have a figure related to spinning, from North America’s Spider Woman to the Norns of the Norsemen. 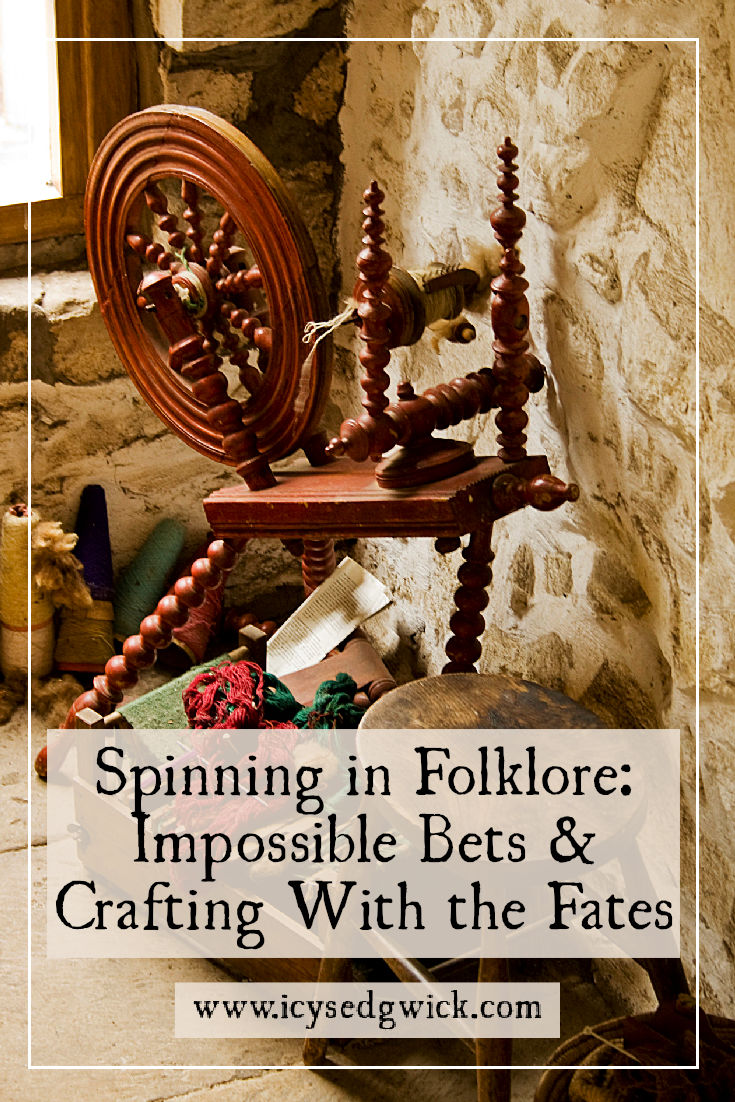 As Freyalyn Close-Hainsworth points out, spinning is our oldest textile skill (2017). Being able to make rudimentary string is what leads to both tools and clothing.

Bear in mind the spinning wheels we think of today are actually a relatively modern invention. While the first wheels appeared in c. 1200, the ‘modern’ wheels only appeared in the eighteenth century. But you don’t need a wheel to do any spinning. You can also spin yarn using drop spindles – and let me assure you, it is a lot harder than it looks!

But which tales or figures most often deal with spinning? And why might it be such a common motif? Hit ‘play’ below or keep reading to find out!

I was torn between including the Fates of Greek and Roman mythology in this post, or last week’s post on weaving. Ultimately, I felt this was a better place for them to go.

In both cultures, there were three Fates, and not even the Gods could change their fate. Much like the Norns in Norse mythology, these three figures held supreme power even over deities like Zeus or Jupiter.

The first Fate, Clotho, spun the thread that became an individual’s life. Her sister, Lachesis, measured the thread. Atropos, who gives her name both to deadly nightshade and the Death’s-head hawk-moth, cut the thread.

The reason for potentially including them with weaving is some myths have Lachesis weaving the thread into a tapestry. This was certainly the slant I borrowed for a short story about the Fates and weaving, which you can read here.

But the Fates fit better among these tales about spinning. The idea of the Fates spinning out our destiny really underlines the creation aspect of spinning. They take rudimentary materials and turn them into something else – in this case, a life. Most people are concerned with what happens during the life (Lachesis’ handiwork) or when it will end (thanks, Atropos).

Yet here, Clotho becomes equally as important, spinning the life into being with her cosmic spindle.

Other cultures also feature spinning deities, such as Frigg, the Norse patron of spinners. St Catherine is the patron saint of spinners.

But spinning is perhaps more associated with the world of fairy tales than other crafts are. And the first one features three figures, much like the myths involving the Fates and the Norns.

There’s a Norwegian folktale involving spinning called ‘The Three Aunts’, and it’s related in The Complete and Original Norwegian Folktales of Asbjørnsen and Moe (2019). I’ve also found this story in several other variations, but it bears repeating here.

A young girl manages to land herself a job as a maid at a palace, and becomes a favourite of the Queen. The other maids are jealous, and tell the Queen the girl boasted she could spin a pound of flax in a day. The Queen is impressed, and gives the girl a room, a spinning wheel, and the flax. Once alone, the girl panics, because she doesn’t actually know how to spin.

An old woman wanders in and asks why she’s so upset. The girl tells her, and the woman offers to do the spinning for her. The only condition is that the girl should name her as an aunt on her wedding day. Naturally, the girl agrees, and the old woman spins the flax.

The Queen is overjoyed, and the other maids are furious. They then claim the girl has boasted about her weaving and sewing abilities too. Each time, she’s left to do the work, and another old woman comes in to do it for her. All she has to do is say the old woman is her aunt.

Eventually, the Queen lets the girl marry her son, the prince. On their wedding day, the three old women turn up. Everyone is horrified because they’re apparently very ugly. But the girl, true to her word, claims them as her aunts. Finally, the prince loses it and asks how she’s so lovely and they’re so vile.

Each old woman promises she was once young and fair too. Sadly, all of her time spent spinning, weaving or sewing has left her looking this way. The prince decrees the girl will never have to do any of them again as long as she lives!

A similar tale is told on both sides of the Anglo-Scottish border, except the three aunts become a single figure – the fairy known as Habetrot (Henderson 1879: 258). Again, the hapless girl is saved from expectations about her crafting prowess by Habetrot’s appearance at her wedding.

The tale of the Three Aunts is almost an inverted version of Rumpelstiltskin, presented by the Brothers Grimm. In this more famous tale, the eponymous creature does the spinning for our hapless heroine. Yet he demands her firstborn as payment. Only guessing his name can render the bargain null and void.

At least, that’s the version we commonly hear. Jack Zipes relates an earlier version from 1810 (1993: 46). In this tale, the maiden can only spin flax into gold. She can’t turn it into yarn. Rumpenstünzchen, as he is known here, arranges for the prince to ride by and take her as his bride. Again, the price is her firstborn. The new queen’s maid overhears Rumpenstünzchen so when it comes time to guess his name, the queen knows which name to give.

Both of these tales hint at a common theme that emerges around spinning in folklore. That’s the help from a god or supernatural creature to finish an impossible spinning task. In the Grimm version of Rumpelstiltskin, the woman tricks her helper and never pays the price.

By comparison, the heroine of the Three Aunts upholds the bargain and tricks everyone else. She’s also forbidden from doing the thing she can’t do in the first place.

In Rumpenstünzchen, the queen tricks her helper but he never helped with the spinning. She held that power herself, to turn flax into actual gold. Yet this was deemed less valuable than yarn. Her inability to produce a useful textile raw material means she’s only fit to marry a prince. The helper’s only job is throw the prince in her path and he is denied the price she originally agreed to.

Spinning thus becomes aligned with trickery of one form or another. Notice it’s not perpetrated by the actual spinner, but rather the woman associated with it. And spinning was already viewed as a woman’s craft. The stick that held the unspun wool of flax was called the distaff, and the female side of the family was often referred to as “distaff side”. In the medieval period, even Eve was associated with spinning, though this doesn’t appear in the Book of Genesis.

Perhaps this is why the spinning wheel becomes the thirteenth fairy’s weapon of choice in ‘Sleeping Beauty’. The fairy, who becomes Maleficent in the Disney retelling, chooses the symbol of female labour for the young princess, who will never need to work a day in her life. Or perhaps she chooses it because it was so ubiquitous, it would be difficult for Briar Rose to avoid seeing one.

It’s at this point that I have to raise the misunderstood spectre of the spinster. At its root, the word means a woman who spins. The dictionary defines the term as applying to women who haven’t married. But M. Strauss-Noll points out that ‘spinster’ and ‘bachelor’ aren’t equivalent (1984: 36). The former is nearly always applied in a negative sense, while bachelors are almost celebrated for their single status.

Part of the reason is that women were expected to marry and leave the workforce. There was no real reason to offer incentives such as promotions or pay rises to working women (Blakemore 2015).

Yet here’s the problem. The fairy tales show how desirable others found the ability to spin. Women even land high profile husbands because he thinks she can spin. Ironically, they’re also expected to stop spinning because they’ve married. The spinning should be left to the old women or the supernatural creatures – those who do the actual work, while the young woman frets about not being able to.

Indeed, an old German superstition warned men who encountered a woman spinning to turn around and find a different route. You can only assume this is because she would be a spinster, and apt to try and trap him into marriage. If that’s the meaning, the superstition ignores the fact the woman may prefer life as an independent creator of her own income…

So why is there so much spinning in folklore?

Julius Ernest Heuscher explains that spinning wheels “usually symbolize inner, creative processes shaping a natural product into something entirely new” (2003: 99). Rumpelstiltskin would be an obvious example, where straw becomes literal gold. There’s probably a metaphor in here about the value of a person’s labour being considered greater than the person themselves but that lies beyond the scope of this post.

It also refers back to the idea of the Fates, spinning a person’s life into being. The turning of the wheel even references the natural cycles of life.

Heuscher also refers to spinning as showing “control of thinking” (2003: 110). In this way, spinning provides an opportunity for meditation. Weaving is an active form of creativity that requires input from the weaver to create the images. Spinning is more passive, requiring a degree of focus and skill but less overt imagination.

As a result, it’s possible that people would gather in a communal way while spinning took place. People might tell stories while they worked. It’s hardly surprising that we ‘spin’ a yarn when we tell a story!

At its heart, spinning is about creation, particularly something from nothing. And in a way, so is storytelling. We take the raw materials (in this case, words and ideas), and spin them into something to preserve those ideas for future generations.

Which are your favourite tales of spinning in folklore?

Asbjørnsen, Peter Christen and Jørgen Moe (2019), The Complete and Original Norwegian Folktales of Asbjørnsen and Moe, University of Minnesota Press.

Blakemore, Erin (2015), ‘Original Spin: On the History of the Spinster’, Daily Jstor, https://daily.jstor.org/original-spin-history-spinster/.

Henderson, William (1879), Notes on the folk-lore of the northern counties of England and the borders, London: W. Satchell, Peyton and co..