I had a lovely jaunt up to Alnwick on Friday, primarily to visit Barter Books, my favourite bookshop in the country. I’ve blogged about it before, way back in 2011, but the last time I was there was last December. I had some books I wanted to drop off, and in return I picked up The Cinema of John Carpenter, an academic book about, you guessed it, the films of John Carpenter, and The Victorian Pharmacy, the book that accompanied the BBC series about medicine, health and the burgeoning pharmaceutical industry during the Victorian period. I’ve started reading the latter, due to my interest in medical history, and it’s turned out to be really useful and who knows, perhaps its Victorian remedies might turn up in my Underground City books?

When I’d finished at Barter Books I had a walk along to the Alnwick Garden – I knew it would be quite melancholy, since most of the plants are now dormant for the winter, but there’s a certain cold desolation to gardens in the depths of winter that is beautiful in its own way. The Walled Garden was certainly windswept, but enough evergreen shrubs were around to stop it looking completely depressing, and a few hardy specimens were clinging on to life, including this beautiful helleborus lividus.

The famous fountain was also still on, and I hurried to take photos of its programmed display when it started. I was a bit slow so I missed the beginning, when the upper cascade is in full force, but I got these photos all the same. You’ll have to excuse the faded appearance – I used my Pentax ME Super and it appears to be suffering from light leaks. 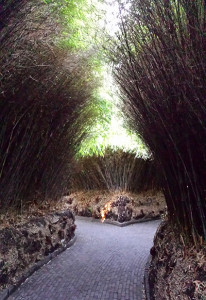 Normally my favourite part of the Alnwick Garden is the Poison Garden, with its collection of toxic plants, but it’s closed for the winter. The water sculptures were still available, those the Rose Garden was naturally disappointing since the roses had all been pruned. I did venture into the maze, but it felt somewhat eerie since I was the only one in there, and the fact the Garden itself was practically deserted meant that I couldn’t hear anything beyond the maze while I was inside. I actually got too freaked out and ended up dashing back to the entrance!

I later stopped for my lunch at the café, where they’ve got some lovely Christmas trees, including one comprised of all of the glass baubles made by visitors. 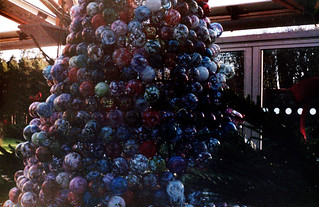 It was a lovely, if lonely, day, and I think the melancholy nature of the garden as it sleeps until spring perfectly suits my mindset and temperament in these darkest months of the year. The weather started off beautifully, and I was blessed with sunshine and blue skies, until the clouds rolled in and the wind got up. Even then, it felt like the most gothic of days and really, who can ask for more?