Unicorns occupy a strange position in popular culture. In fantasy narratives, they’re often pure, noble animals who save the hero in their darkest hour. Yet a recent splurge in the beauty industry saw unicorns splashed across holographic makeup lines, with brushes shaped like spiralled horns. And they’re a perennial favourite with children. 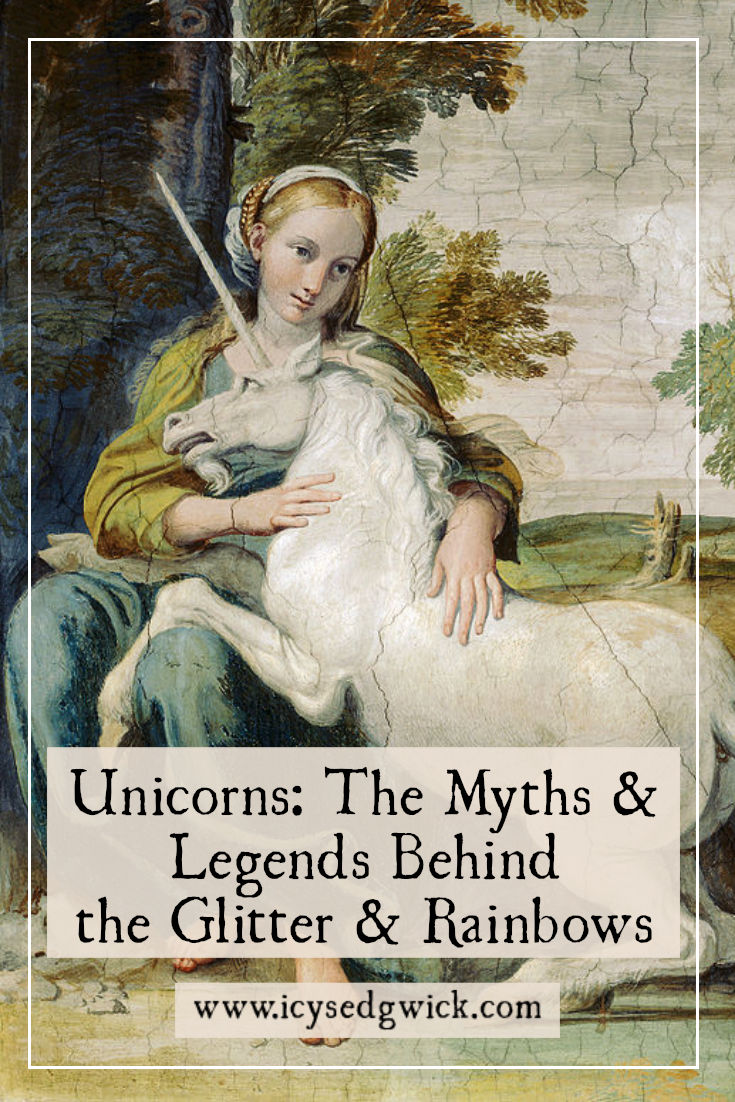 Behind the glitter and rainbows stands a somewhat spiritual creature, at times both gentle and ferocious, mysterious and medieval. We’ve already covered dragons and griffins here at Fabulous Folklore. You’ll also find unicorns aplenty on coats of arms and family crests. The unicorn is even Scotland’s national animal.

But where do they come from and is there any possibility that they ever existed? Keep on reading or hit ‘play’ below to find out.

The Unicorn of Antiquity

In around 398 BC, Greek physician Ctesias wrote about unicorns. He did so while based in Persia, though his tales were about the unicorns of India. Note, he’d never actually been to India himself. He gathered tales from travellers, so he also wrote about dog-headed men and griffins. As Chris Lavers points out, the tales are so fantastical, we have two options. First, we can assume he was a liar. Or second, he just wrote down the stories travellers told him, making him simply gullible (2009: 5).

Ctesias tells us the unicorn has a white body, dark red head, dark blue eyes, and a white, crimson, and black horn (Suhr 1964: 94). For Elmer G. Suhr, this description can be equated to a solar eclipse, with its black shadow, white corona, and “red protuberances” (1964: 106). He also sees the moon’s association with the virgin goddess Artemis as explaining the unicorn’s preference for virgins (1964: 107).

The Persians, the Greeks, and Pliny the Elder all argued for the existence of the unicorn in India (Ryan 2012: 53). Julius Caesar later decided it lived in Celtic forests (Ryan 2012: 53). Pliny the Elder described the unicorn as having the body of a horse, the head of a stag, the feet of an elephant, the tail of a boar, and a 3ft long black horn (Mandel 2001: 10). Matt Simon notes that an Indian rhinoceros also has feet and a tail to match this description (2015). Was the original unicorn a rhinoceros after all?

When we move into the 12th century, the bestiaries ditched Pliny’s hybrid model. They described the unicorn as being “very small”, the size of a goat’s kid (Mandel 2001: 11). Yet this description clearly didn’t stick, as a famous example of Middle Ages weaving can attest.

The Unicorn Tapestries, now held at The Cloisters in New York, is a series of seven tapestries dating to around 1500. In it, hunters set out to capture a unicorn. The tapestries are mostly accurate in a botanical sense. Yet “the designers and weavers ignored the seasons by juxtaposing plants in flower that ordinarily bloom at different times of the year. […] Thus each plant is revealed in its prime, producing an enchanting ensemble of the best that nature has to offer” (Sipress 1973: 180). This creates a lush and abundant paradise through which the unicorn can move.

In one tapestry, a snake has cursed the water of the forest. The unicorn uses its magical powers “to remove serpent’s venom from water, enabling birds and beasts of the forest […] to quench their thirst safely” (Sipress 1973: 186). By making the water safe again, the unicorn comes to represent Christ.

The tapestries are also known as The Hunt of the Unicorn.

In the early Christian era, people believed the unicorn to be a ferocious beast, in part thanks to Ctesias’ descriptions of the unicorn’s ferocity. Hunters couldn’t capture a unicorn, and he could only be tamed by a virgin maiden (Sipress 1973: 186).

The maiden would sit quietly until the unicorn found her. In her presence, the beast became tame, even laying its head in her lap. At this point, the hunters could capture or kill the unicorn. In The Unicorn Tapestries, the maiden looks away at the gory moment. Is she unwilling to acknowledge her role in its death? These legends tied together virginal girls and unicorns. Some tales claimed the unicorn could catch the girl’s scent. Others overlaid a sexual element onto the scene, with the unicorn suckling from the maiden.

What did the unicorn represent?

In these legends, the unicorn becomes associated with purity. This is added to their mysterious, untamed allure. Their ferocity in fighting, depicted in the Unicorn Tapestries as the unicorn fights off the hounds, becomes its strength and power.

The purity of the unicorn is why rulers often adopted them as a symbol. They could “celebrate their beneficence in providing their citizenry with a safe and happy existence” (Mandel 2001: 11). There’s a unicorn on Florence’s Neptune Fountain, indicating the safety of the water within (Mandel 2001: 14).

There’s also something of the outsider about the unicorn. Paul Clayton-Lea notes that “[i]ts religious history goes back to the time of the great flood when, Talmudic interpreters say, the beast was too large to fit into Noah’s ark and so had to be towed along by a rope tied to its horn” (1989: 466).

In one biblical tale, Adam named the unicorn before any other animal. When he and Eve left the Garden of Eden, the unicorn went with them. Here, the unicorn adds loyalty to its list of virtues. Unlike Adam and Eve, the unicorn could return to the Garden every century. By eating the vegetation and drinking the water, it renewed its strength (Alexander 2015: 19).

Yet its greatest quality was perhaps the magical properties of its horn.

The Healing Properties of the Unicorn

Scholars have indicated Joan’s interest in possessing a horn as being symptomatic of his flightiness as a monarch. Yet Michael A. Ryan explains that it also shows an attempt to exercise his authority. He was willing to throw the might of the state behind his desire to own the horn (2012: 52). In the medieval era, the fantastic or monstrous did not seem quite so far away.

Yet his epilepsy means his quest for the horn doesn’t seem quite so outlandish. The Count of Armangac sent a piece of unicorn horn to Joan. He poisoned two dogs and touched one with the horn. According to reports, the dog not touched with the horn died, while the other lived (Ryan 2012: 56). Joan went on to ‘cure’ subjects who’d been poisoned.

Even Nicholas Culpeper advocated for the medicinal powers of unicorn horn. He claimed it also ‘provoked urine’, restored vitality, and helped bring on a birth (Turgeon 2020).

Carolyn Turgeon points out the Worshipful Society of Apothecaries, founded in 1617, features two unicorns on its crest. Surprisingly, many apothecaries sold “powdered unicorn horn” (2020). It clearly wasn’t unicorn horn. Some horns came from narwhals (Clayton-Lea 1989: 466), while others may have belonged to other antlered animals such as the oryx.

Yet it wasn’t just the horn that had healing properties. Hildegard of Bingen believed unicorn liver, mixed with egg yolks, could cure leprosy – unless God didn’t want the leper to be cured. She also believed that you could wear a belt of unicorn hide to save yourself from pestilence (Turgeon 2020). Who knows what animals they used as stand-ins for unicorn liver and hide?

An article on BeliefNet.com explains you can find the word ‘unicorn’ in the King James version of the Bible nine times. Later translations refer instead to a wild ox. No one really knows what the original Hebrew word, re’em, referred to. Some scholars think a wild ox or an auroch is more likely, while Matt Simon suggests the oryx, which would make sense since people sold their antlers as unicorn horns (2015).

Yet the Greeks had never seen one. So they translated re’em to monokeros, or ‘one-horned’. That became unicornis in the Latin translation of the Bible. By the time we get to the King James version, the translators made up the word ‘unicorn’ (they also made up the word ‘baptism’). Following this line of thinking, unicorns really did exist…just not as we think of them.

Some wonder if the unicorn did once exist, but humans hunted it to extinction for its horn. Benjamin Radford notes the exploration of the globe during the Enlightenment led to a waning belief in unicorns (2017). After all, if you keep visiting new countries and still don’t find a unicorn? You’re going to doubt its existence eventually.

Though there is another explanation.

Tiffany Sharples relates the case of a one-horned deer in Florence in 2008. Nicknamed ‘Unicorn’, a genetic mutation caused the deer’s single antler (2008). Could animals with “similar abnormalities” have added to the unicorn legend over the centuries? (Sharples 2008)

Nowadays, they’re beloved by the spiritual and New Age communities. Some practitioners provide meditations to help you contact unicorn spirit guides, while others believe unicorns exist on a different plane. When we’re pure enough, and we believe hard enough, we’ll see them again.

What do you think? Are unicorns extinct animals, or purely mythical?

BeliefNet.com (2011), ‘Are there really unicorns in the King James Bible?’, BeliefNet.com, https://www.beliefnet.com/columnists/on_the_front_lines_of_the_culture_wars/2011/08/are-there-really-unicorns-in-the-king-james-bible.html.

Ryan, Michael A. (2012), ‘The Horn and the Relic: Mapping the Contours of Authority and Religiosity in the Late Medieval Crown of Aragon’, Preternature: Critical and Historical Studies on the Preternatural, 1:1, pp. 49-71.