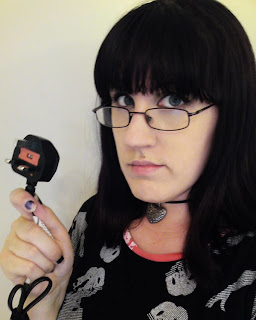 I can often be a somewhat contrary young miss. One minute I’m posting an entry bemoaning the reliance on technology, and the next I’m posting an entry on how my Netbook has boosted my productivity. Having said that, I’m not necessarily changing my mind as I’m fully capable of believing both of those things simultaneously. I believe that both traditional methods and technological advances have their uses, and their place, when it comes to writing. I stand by my statement that I love my Netbook for allowing me to work pretty much anywhere, and for allowing me to increase my output by utilising previously wasted time on tube journeys or at lunchtime. However, I also acknowledge that when I’m at home, I have a horrid tendency to get distracted by Facebook, Twitter, or my ever-expanding blog list. I end up spending hours reading the fiction of others, which is immensely enjoyable, but I really should be working on my own.

As well as writing a weekly Friday flash and revising my first novel, I have two other major projects on the go. One is the Tales from Vertigo City e-book that I’ve talked about previously, while the other is a collection of my fantasy/horror related flash fictions. This collection will feature expanded versions of nine stories submitted to the #FridayFlash collector, a flash inspired by a Writer’s Digest prompt, another random flash written after a night out in London, and two completely exclusive flashes that you won’t find anywhere else. If you really want to read them, you’ll have to get the e-book!

I’ve already written one of these exclusive flashes. I had the idea late on Friday, inspired by an anecdote I found in a book on London history. Yet by Sunday evening, I still hadn’t written anything. The idea kept going around and around in my head, and I wanted to write it down, it’s just I kept getting distracted by the Internet. I would start to plan the first line and oh! Would you look at that? I’d find another Friday Flash I wanted to read. I’m not one of these people who can have my laptop on and NOT have Tweetdeck running (unless, obviously, I have no wi-fi connection) so I did the only thing I could.

Yes, that’s right. I switched off my laptop, I put a CD of classical movie scores in the stereo, I picked up my A4 notebook, and I started writing. By hand. With a bright blue Pilot fineliner. Thirty three minutes later, I had my flash. It underwent some revisions during the transition from handwritten page to Word document, but by and large, it was done. I felt incredibly productive, and pleased that such a simple, and obvious, solution had worked. Making the switch from typing my work to writing it longhand also helped to break the miniature block I felt, a block that stood between the idea in my head, and the process of writing it down. Writing longhand took my brain by surprise, and it vaulted over the block with ease. Hurrah!

So if you’re having a similar problem breaking through writer’s block, or actually getting the work done, here are my three top tips.

Say, what are you doing still reading this? Don’t you have some writing to do?