Newcastle sometimes gets a raw deal here in the UK. Nearly all talk of the so-called ‘Northern Powerhouse’ forgets there’s still a whole swathe of England north of Manchester. People form their opinion of its inhabitants based on photos of scantily-clad clubbers tottering through the snow in 6-inch heels. It completely ignores our Roman history, our role in the Industrial Revolution (when the city was the literal northern powerhouse), and our weird little quirks. Like the Vampire Rabbit.

The Vampire Rabbit sits above the weirdly ornate rear entrance to Cathedral Buildings. The front of the block is on Dean Street, once voted the best street in the UK. The back faces the eastern end of St Nicholas’ Cathedral.

Completed in 1901, architects Oliver, Leeson and Wood designed Cathedral Buildings. The six storey building is now a mixed-used property, owned and managed by Minel Venues. Inspired by the Sparrowes House in Ipswich, Cathedral Buildings is a strange, rococo confection that stands out on Dean Street. And that’s just the front. 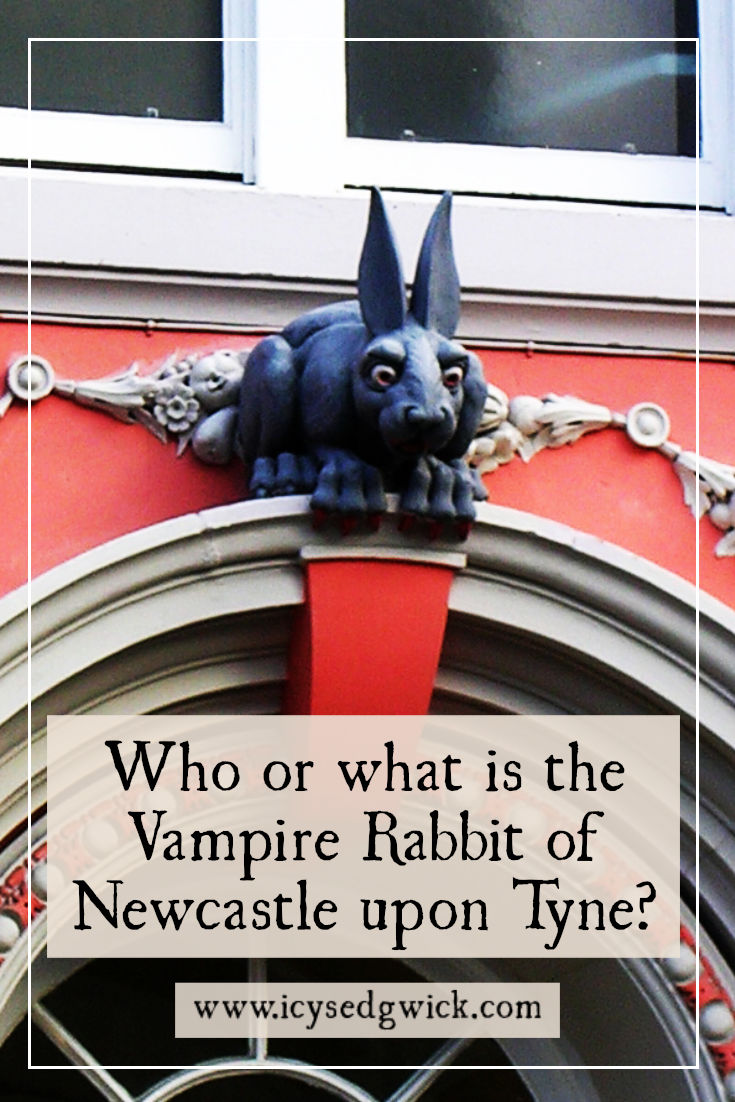 Why on earth should a Vampire Rabbit hang out around the back? Come with me and we’ll meet our funny little friend…just try and keep your fingers out of reach…

Hit play to listen to this episode of the Fabulous Folklore podcast – or keep reading!

As far as anyone can tell, the Vampire Rabbit has always been on the building. He had shorter ears in the past, and he was white at one stage. His current black coat and red fangs and claws are the result of a newer paint job. According to one story, a builder knocked off his original ears and the replacements were longer.

He’s sometimes referred to as a gargoyle. But that’s incorrect. Gargoyles feature water spouts to carry water away from the walls of a building. The Vampire Rabbit is a grotesque – a carving of a creature meant for decoration.

But there are no precedents for vampire rabbits as grotesques. And there are certainly no obvious appearances of vampire rabbits in vampire lore. While he was referred to as the Demon Rabbit at one point, it’s still not a typical association. Rabbits are usually associated with fertility, madness, purity or, weirdly, cunning and intelligence. You only need to look at Brer Rabbit to see the latter in effect.

Renaissance art usually relates rabbits either to purity, and places them with the Virgin Mary, or it associates them with fecundity, and you’re more likely to see them with Venus.

So could he be a hare?

Several theories exist about the Rabbit, though none of them are definitive, and most of them rely on hearsay. One of them believes that he’s actually a hare, and a nod to the work of engraver Thomas Bewick, whose workshop was very close by. His work features a range of hares and rabbits, but that seems a little far-fetched given the rabbit isn’t particularly naturalistic.

Hares certainly play a strange role in folklore. An English superstition claims a fire is imminent if you see a hare running through a village. In Cornwall, seeing a white hare means a storm is on the way. And if an old hare crosses the path of a pregnant woman, her body will be born with a harelip (Daniels and Stevens 2003: 641). Many believed witches took the form of hares to reach their gatherings, so seeing a hare late at night made people uneasy.

I’m not sure how they reconciled this belief with a belief in broomstick riding. One or the other, people.

So how could any of this explain the Vampire Rabbit? One Spanish superstition gives us a very slight link. According to Cora Linn Daniels and C. M. Stevens, people believed hares dug up graves and ate from the corpses at night. Because of this, no one liked to eat hares (2003: 641). It’s unlikely that the Vampire Rabbit (or Vampire Hare as he appears now) has any links with Spain…but he does overlook a graveyard.

Is his location important?

According to Random Times, there’s a theory that the hare is a joke in architectural form. One of the building’s architects was friends with Sir George Hare Philipson, a doctor at Newcastle’s Royal Infirmary and founder of the University of Durham Masonic Lodge. In this theory, the vampiric hare is either poking fun at, or honouring, the good doctor.

But the fact he’s on the back of the building is a key point. The front entrance isn’t actually as grand as the back, and the front doesn’t feature any fantastical creatures. I wondered if the Vampire Rabbit was somehow linked with witchcraft, due to the old belief that witches could transform into hares. He’s opposite a cathedral, so maybe someone associated with the building had a problem with Christianity.

The cathedral grounds he watches over were once used for burials (now it’s a car park). So maybe he’s there to keep the inhabitants in line!

Dark tales of vampirism abound in the area. When the unfortunate burials were relocated to make way for the car park, some of the corpses were allegedly discovered buried facing down. This is supposedly a means of keeping vampires in the grave as they’ll just dig themselves further into the earth, instead of out.

Is the rabbit a reference to that?

If we want to string out the tenuous links even further, you often find dead rabbits in Dutch vanitas paintings. Their intention was to remind the viewer that death comes to us all. Such ‘cheerful’ work often included memento mori, such as skulls, but rabbits, as prey animals, were common symbols.

Given the Vampire Rabbit’s position opposite what was once a graveyard, maybe he’s there to remind us that, like those he watched over, we’re not immortal either?

How famous is he?

I’m not really sure when he became ‘famous’ as such, but he’s definitely become an object of fond associations for locals. In 1998, the Vampire Rabbit even made an appearance in Tinseltoon, a children’s fairytale set in Newcastle. In it, the historic statues of the city come to life one Christmas Eve, including our infamous bunny. Here, he’s not so much a vampire as a vegetarian, trying to munch on some grass in the churchyard.

I first came across him on a ghost walk around the Castle Garth area in around 2008. The Vampire Rabbit was the cover image on a tourism brochure; he also appears on posters to advertise the area. He was also spectacularly lit up during the Glow festival in 2006.

No matter what the reason for his being there is, I’m very glad to live in a city that features vampiric bunnies as ornamental decor!

Why do you think the Vampire Rabbit is there? Let me know below!