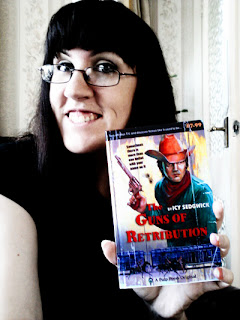 I’ve been posting regularly to my blog for a while now, and after much thought, I’ve decided I don’t want my blog to be nothing but flash fiction or posts about writing. I’d like to start sharing more about my experiences as a writer – you never know, maybe you’ll be feeling the same way and we can all offer each other support. Plus, I think it’s about time I starting admitting to a little vulnerability, don’t you?

Well, I was at an event on Saturday night where I had an opportunity to try and sell a few copies of my pulp Western, The Guns of Retribution. A grand total of two were sold, and it’s really made me examine just why I’m so appalling at self-promotion. I mean, who better to sell my story than me? The only person who knows it better than I do is the main character, and unless I get a ouija board out, Grey isn’t going to be talking to anyone any time soon. I should be able to walk up to someone and start talking about my book…but it’s not that easy, is it?

The first stumbling block is the fact that I’m abysmal at engaging strangers in conversation. I was never the most gregarious of folk to start with but seven years of living in London have conditioned me not to speak to those I don’t know. I don’t find myself to be in the best position to recommend myself, and the idea of randomly walking up to someone fills me with a small degree of alarm. Of course, it’s all about context. Were I to be walk into a knitting group, and find myself among a group of film scholars, things would be different, but to walk up to someone with the intention of trying to sell something? Well, that just brings us onto the second stumbling block.

I’m not the type of person who likes to harrass people about what I do. I see some people in my Twitter stream who seemingly post nothing but tweets reminding us of the availability of their book, and after a while it becomes white noise. Sure, I’ll post occasional links to my own stuff but I don’t want my Twitter account to become the cyber equivalent of the incessant TV ads that go from “mildly annoying” to “downright abhorrent” due to the frequency with which they are aired. I like to talk to new people on Twitter because I like the conversational side of it, and if they happen to buy a book after chatting to me, then great. But to start talking to someone with the sole intention of selling something? Eek.

The problem is, I know it has to be done. The Guns of Retribution won’t sell itself. I can tell you that it’s a story about a young man named Grey O’Donnell, who flees his native Arizona after a run-in with the local heavies, only to return six years later as a fully-fledged bounty hunter on the trail of a murderer. His path crosses that of Jasper Roberts, his former adversary, who is now the crooked sheriff of his hometown, Retribution. Roberts has no intention of letting Grey get away from him for a second time, and a collision course is set between the two. I can tell you that it’s got train robberies, shoot outs, hangings, fist fights and a femme fatale. I can ask you not to be put off by the fact it’s a Western, and rather to view it as an action tale set in the Old West.

Or I can point you towards what others have said. Paul D Brazill described it as “a joy, containing all the action and adventure of an old school western”, while Heath Lowrance called it “a strong Western full of action, honor, betrayal, and fast guns”. Old West maestro Edward A. Grainger even said “If you buy one book today, make it The Guns of Retribution“. Pulp Serenade gave me this wonderful review, the highlight being “The Guns of Retribution is at its best when the excitement runs high. There’s a visceral, tangible element to Sedgwick’s writing that gives the story added punch.”

So why can’t I market my own book? Obviously it’s something I’ll be working on in the New Year, particularly as I work on the sequel, but how about the rest of you? Anyone got any hints or tricks they use when promoting their work?