Astrology has seen something of a resurgence in recent years. Star signs were once relegated to snippets of vague predictions at the back of the newspaper. Yet now, you can find highly skilled astrologers on Instagram and Tik Tok.

It’s an ancient discipline, with its roots in several cultures. What we call the zodiac in the west is better referred to as the Greek zodiac. It’s a series of twelve signs, named after constellations found nearby. They’re not the same as the constellations, for reasons better explained here.

The twelve signs of the zodiac are divided into four clusters of three signs. Each cluster takes its name from one of the four elements. This post will include the three fire signs: Aries, Leo, and Sagittarius.

Don’t expect any astrological interpretation of the signs. If you want that, book a reading of your natal chart with a trained astrologer like Amaya Rourke at Heart Warrior Path. 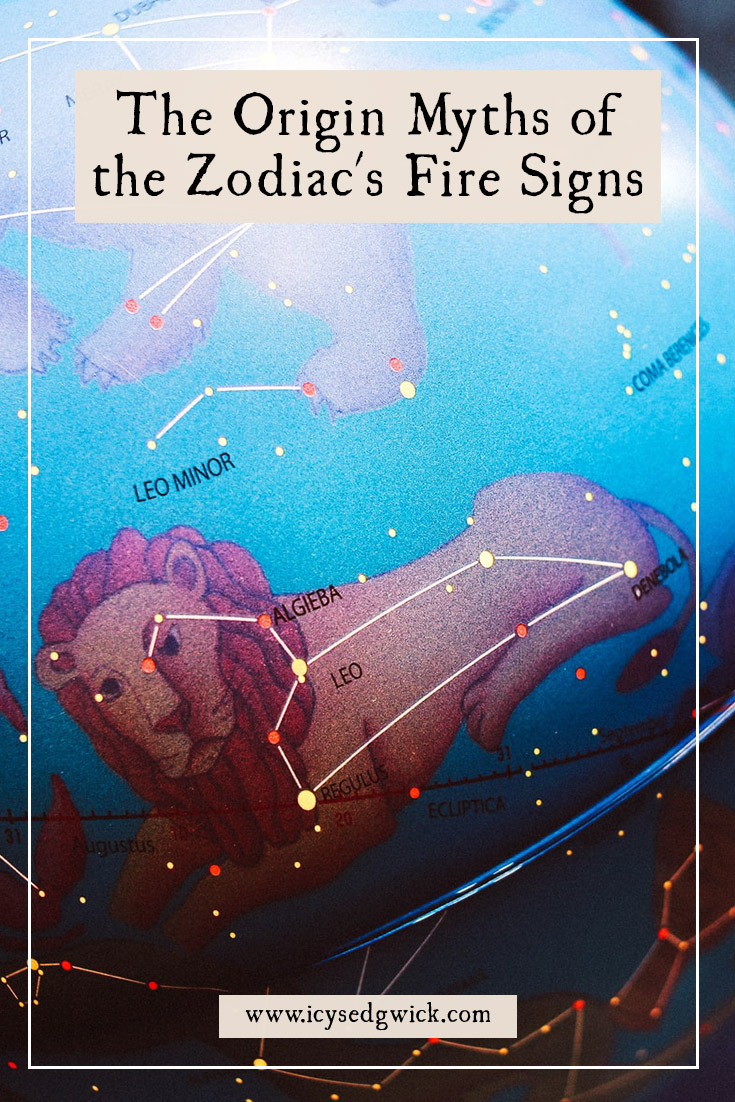 The constellations appear with different names and forms in different cultures. Those stories belong to those cultures, so it’s for them to tell them in their own way. So this post will focus largely on the Roman and Greek myths behind the fire signs.

For now, let’s start with Part 1 of our exploration of the origin myths behind the fire signs of the Zodiac: Aries, Leo, and Sagittarius.

Aries – First of the Fire Signs

Once known as The Agrarian Worker, Aries became the Ram in a later Babylonian tradition. It is this form with which we are most familiar, with the astrological sign resembling a pair of curved ram horns. Early writers also associated Aries with the ram-headed god Amon-Ra in ancient Egypt.

For the ancient Greeks, Aries marked the first sign in the zodiac because the constellation was the home of the Spring Equinox. This is the point where the sun crosses the celestial equator. Trouble is, the Earth’s axis isn’t entirely stable, leading to a phenomenon called the precession of the equinoxes (Ridpath). The equinox has actually moved since then by some 30°, which is why it now sits in Pisces. Despite this, Aries still remains the first sign in the zodiac. As the first of the fire signs, ‘Aries’ is the Latin name for the constellation. The Greek name was Krios, or ‘ram’ (Ridpath).

Aries becomes the golden ram that saved Phrixus and Helle. King Athamas had two children, Phrixos and Helle, by his first wife, the cloud nymph Nephele. Their stepmother, Ino, wanted her stepchildren out of the way so that her own children would inherit Athamas’ kingdom. She orchestrated a famine, so Athamas sent word to the Oracle of Delphi, asking for advice. Ino intercepted the returning message to insert a fake prophecy that required the sacrifice of Phrixos to end the famine. Hermes gave Nephele a golden, winged ram, Aries. She sent Aries to intercede on her behalf. He arrived just before the sacrifice took place, whisking away the royal pair.

Helle fell off Aries’ back and drowned. This explains why ‘the Hellespont’ is another name for the Dardanelles. Phrixus made it to Colchis in one piece. Once there, he sacrificed Aries to Zeus in gratitude and gave his golden fleece to Aeëtes, brother of the great sorceress Circe. This won him the favour (and daughter) of Aeëtes. As thanks for saving Prixus, Hera placed Aries among the Zodiac.

For Eratosthenes, Aries was actually immortal, since he was a creature from the gods. In this legend, Aries shed his fleece and left Earth after delivering Phrixos to safety (2015: 97). This explains why the constellation is faint in the sky.

Ian Ridpath notes that in John Flamsteed’s Atlas Coelestis (1729), Aries doesn’t have his fleece in the zodiac since it’s still on earth. Jason and the Argonauts later stole the Golden Fleece, but that lies outside the scope of this post.

Leo is the Lion of the zodiac and is the fifth sign. He’s also linked with the first labour of Hercules, capturing the Nemean Lion.

After Hercules killed his children through insanity, the Oracle of Delphi ordered him to perform ten labours assigned by King Eurystheus. This king sat on the throne intended for Hercules, though Hera gave the throne to Eurystheus instead. By doing these tasks, Hercules would atone for his crime and achieve immortality.

The first of the labours required Hercules to kill the Nemean Lion, so-named because the lion terrorised the valley of Nemea. He was a child of either the monsters Echidna or Typhon, or he was the offspring of Selene, the moon goddess (Ridpath). Whatever his parentage, his pelt was immune to arrows. Hercules couldn’t penetrate it using any of his weapons.

The lion retreated to a cave with two entrances. Hercules blocked up one and headed into the other armed only with a club. Once inside, Hercules strangled the lion. He skinned it, apparently using the lion’s own claws to cut the skin, and wore its pelt (Ridpath). Not only did this make him look even more fearsome than ever, it also protected him from his enemies.

So why did Zeus put the dead lion in the sky as Leo? Eratosthenes thought it was because the lion was King of the Beasts (2015: 71). Others think it marked Hercules’ first victory in his labours. That’s particularly true since this was the only kill he made without using weapons (2015: 70).

Sagittarius is the Archer of the zodiac, and he’s the ninth sign. The last of the fire signs also has two possible origin stories. First, we’ll explore the idea that Sagittarius is Chiron the Centaur. Then, we’ll investigate the claim Sagittarius is Crotus the Satyr.

In most depictions, he appears as a centaur, the half-man, half-horse creature of Greek myth. Most legends agree that he is Kheiron, or Chiron, the most noble of the centaurs. As the son of either Poseidon or Chronos (the stories differ), he’s also a demi-god. He learned the arts of healing from Apollo, which he passed on to one of his most famous pupils, Aesculapius.

Kings trusted Chiron to educate their sons, so he also taught Hercules, Achilles and Jason. Hercules becomes important to our tale.

As we saw earlier, Hercules was tasked with ten labours in order to atone for killing his children. For the fourth labour, he killed the Erymanthian Boar. After doing so, he headed home. While minding his own business, drunken centaurs attacked him. Many Greek myths portray centaurs as lusty creatures, fond of women and possessed by rather large sexual appetites. Chiron is the odd one out among them, putting learning and healing above such pursuits.

Hercules shot at these aggressive centaurs with arrows he’d poisoned using hydra venom to defend himself. Unfortunately, one of them hit Chiron by accident. Because Chiron was a demigod, he couldn’t die from his wound. Yet the poison caused excruciating pain, and would continue to do so forever.

Zeus let Chiron give up his divine status so he could finally die and find release from the wound. Chiron gave his divinity to Prometheus, the Titan who stole fire from the gods and gave it to humanity. After his death, Zeus placed Chiron in the Zodiac as Sagittarius, the last of the fire signs.

The other Sagittarius legend claims that the Chiron version actually explains the Centaurus constellation, not Sagittarius. In this version, Sagittarius refers to a creature named Crotus. He’s a satyr since he walks on two goat legs, rather than having the body of a horse like a centaur. Like Chiron, he was an exception to his race, being an excellent musician, knowledgeable, and a good hunter (Gods-and-monsters.com).

Son of Pan, Crotus was a foster brother alongside the Muses. In one legend, he made the first bow from a piece of wood and a length of string (Roper). He apparently invented ‘rhythm’ and clapping to applaud a good performance. Zeus placed Crotus in the zodiac as Sagittarius at the request of the Muses (Atsma). They wanted people to remember Crotus for his archery skills but also for his appreciation of music (Eratosthenes 2015: 77).

So which is correct?

Far be it from me to tell the ancient Greeks how to interpret their own myths. Yet Ian Ridpath points out the constellation was actually of Sumerian origin. To the ancient Sumerians, the figure is their god of war and hunting. He appears as a winged centaur-like archer (Ridpath). When the Greeks adopted the figure, they dropped the wings, but then they didn’t have any myths to go with it.

Eratosthenes certainly believed Sagittarius to refer to Crotus. He thought the figure in the constellation more closely resembled a satyr than a centaur. In addition, Eratosthenes didn’t think centaurs used bows (Ridpath). It’s more likely that the Chiron myth relates to the Centaurus constellation. That makes Crotus the better candidate for Sagittarius!

Which of these fire signs are you?

People often associate the fire signs of the Zodiac with hot tempers, extroversion, and a theatrical temperament. This is probably due to the temper of the ram and the power of the lion. Add the extreme focus of the archer and you can see why fire signs get things done!

They also mark a range of types of myth. Aries stops a sacrifice taking place. Leo is a monster, only bested by one of Greek myth’s greatest heroes. Sagittarius is a skilled hunter who supports the arts. Take from these legends what you will, but I think we can definitely appreciate the noble, powerful, and brave traits on display among the fire signs!

Come back next week to learn the origin myths behind the earth signs: Taurus, Virgo, and Capricorn! Sign up for my list at the link below to get a notification when the post goes live.