As we’ve seen throughout this blog series, there’s more to astrology than newspaper horoscopes and star signs. In fact, we’ve been looking at the Greek origin myths of the signs in the zodiac. 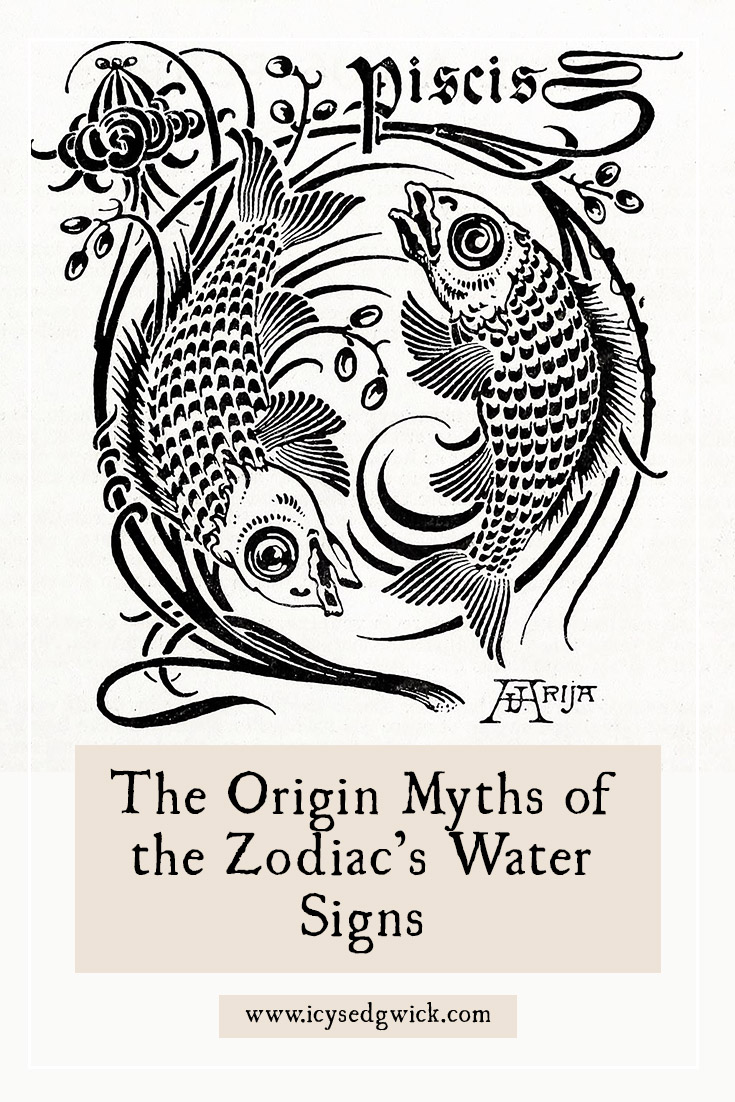 The twelve signs of the zodiac are divided into four clusters of three signs. Each cluster takes its name from one of the four elements. In the previous post, we looked at the air signs. This post will include the three water signs: Cancer, Scorpio, and Pisces.

Cancer, Dark One of the Water Signs

Cancer is the first of the water signs, with the Greek name Karkinos. This became Carcinus in Latin, and eventually Cancer. We recognise it as a crab, though William Tyler Olcott suggests the ancient Egyptians saw it as a scarab beetle (1936: 87). It’s faint, leading some to refer to it as the “Dark Sign” (Olcott 1936: 87).

Like Leo, Cancer appears in the labours of Hercules. Unlike Leo, the crab was not one of the monsters Hercules needed to fight. Its origins are altogether more modest.

The second labour of Hercules required him to kill the Hydra. Many people are familiar with the Hydra, the many-headed monster that grew two new heads for every one struck off. He would later use the poison from its fangs on his arrows (the same arrows that injured Chiron the centaur). During Hercules’ battle with the Hydra, a crab scuttled out of the swamp. It decided to join in and attacked Hercules’ foot.  Hercules lashed out and stamped on the crab (Hard 2015: 66).

Hera, who already detested Hercules, decided to put the crab in the zodiac for its efforts.

The Donkey Within Cancer

Cancer is an interesting sign because two of the stars in its constellation have two separate legends. They’re Gamma and Delta Cancri, known in Latin as Asellus Borealis and Asellus Australis.

Eratosthenes tells the story thus. After the Olympians overthrew the Titans, they went on to battle the Giants. Dionysus and Hephaestus rode to the fight on donkeys. But the Giants didn’t know what donkeys were and took fright when they heard them braying. They assumed the noise was that of a fearful monster (Hard 2015: 66). As thanks (and presumably amused by the turn of events), Dionysus put the donkeys in the sky.

In the other version of the story, insanity struck Dionysus (courtesy of Hera), and he took himself to the oracle of his father Zeus. He hoped he might learn how to regain control of his mind (Hard 2015: 67). On the way there, he came to a marsh he couldn’t cross. Two donkeys stood nearby, and one of them carried him to the temple. He turned both donkeys into Gamma and Delta Cancri as thanks (Olcott 1936: 88).

Commentators note how flimsy these two legends are. Yet either way, the stars flank another cluster of stars called the Phatne, or the manger, known in Latin as Praesepe.

Scorpio, Firebrand of the Water Signs

Scorpio derives its name from the Scorpius constellation: the scorpion. Only astrologers refer to it as Scorpio. Even the Sumerians knew it as a scorpion over 5000 years ago (3 Ridpath). It used to be a bigger constellation, until the first century BC. That’s when the Romans changed the ‘claws’ so they became the Libra constellation.

The common point of the myths is that Scorpius stung Orion to death. Eratosthenes claims it was because Orion tried to rape Artemis. The virgin goddess of hunting sent the scorpion to defend her (Hard 2015: 74). Aratus also supports this version of the myth.

Yet in a separate description on Orion, Eratosthenes contradicts himself. In an alternative myth, Orion boasted that he was going to kill all of the beasts on earth. Gaia wasn’t impressed by this and dispatched Scorpius to teach him a lesson. Zeus put Orion in the stars at the request of Artemis because of his hunting prowess. He put Scorpius in the stars as a reminder of Gaia’s power (Hard 2015: 75).

Whether boastful or rapacious, Orion paid for his poor behaviour. The story also links with the way the constellations appear in the sky. Orion sets when Scorpius rises (Hard 2015: 75).

Just to be contrary, Olcott claims the scorpion emerged from the earth “at the command of Juno”, Juno being Hera in the Greek myths (1936: 325). He doesn’t explain why.

But Olcott does point out another reason for the importance of Scorpius. At midnight on the spring equinox, Scorpius was on the meridian in the south, while the Dragon was on the meridian in the north. This meant that Ophichus looked like he was standing on the scorpion, while Hercules stood on the dragon (1936: 325). People felt the placements of these four figures, in two groups of a giant stepping on a killer creature, could not be an accident (1936: 326).

Scorpius gets an extra claim to fame. Olcott claims he also stung the sun god’s horses. This prompted Phaeton’s mad dash across the sky in Apollo’s sun chariot (1936: 326).

Pisces, Mystic of the Water Signs

Pisces is the last sign in the zodiac and the last of the water signs. Due to the precession of the equinoxes, Pisces is now the home of the vernal equinox (Olcott 1936: 309). Technically, this should make it the first in the zodiac, not Aries. But like many of the other signs we’ve explored, it also has conflicting Greek myths to explain its origin.

Ian Ridpath also notes that because the myth accompanying the sign happened near the Euphrates river, it’s likely the Greeks took the constellation from the Babylonians. Robin Hard suggests the myth referred to a Syrian mother goddess, Derceto. The Greeks, having no piscine myths of their own, adopted her symbol, and identified it with one of their own goddesses (Hard 2015: 85).

We’re going to return to the fight between the Olympians and Typhon that we talked about in Capricorn. By this point, the Olympians had already overthrown the Titans and the Giants. But they still had to defeat Typhon, an awful monster. His mother, Gaia, sent Typhon after the gods.

In most versions of the myth, Pan alerted the gods that Typhon was coming. This is where he, or his other form Aigipan, became Capricorn. Aphrodite and her son Eros hid in the reeds, but the goddess of love still didn’t feel safe. She called out to the water nymphs for help. Some believe they turned Aphrodite and Eros into fish. Others think two fish carried the pair to safety and were rewarded by being placed among the stars. William Tyler Olcott claims Aphrodite and Eros turned themselves into fish. In his version, it was Athena that immortalised the fish in the heavens (1936: 309).

Hyginus gives another explanation, again involving Aphrodite. In this legend, two fish rolled an egg out of the Euphrates. Doves incubated the egg and when it hatched, Aphrodite emerged. Zeus put the fish in the zodiac as thanks (Hard 2015: 86). Aaron J. Atsma notes that Aphrodite’s origin myth credited the fish with helping during her birth from sea foam. He even posits they were either the same as, or reimagined as, the sea centaurs sometimes depicted in bringing Aphrodite ashore (2 2000-2017).

Either way, Aphrodite is heavily associated with Pisces. Though one thing is clear: none of the Greek myths satisfactorily explains why the fish of Pisces are joined by a cord.

Which of these water signs are you?

People often associate the water signs of the Zodiac with being emotional, nurturing, and somewhat mystical or mysterious. None of these attributes come from the signs themselves, but rather the associations of the element of water. The water signs link with the suit of Cups in the tarot.

The water signs also mark a range of types of myth. Cancer represents a small creature standing up to the mighty Hercules. Scorpio is the supreme defender of either Gaia or Artemis against an arrogant hunter. Pisces is related to Aphrodite and Eros, deities of love and beauty, but also transformation and rebirth.

Come back next week to learn the origin myths behind a range of constellations you should be able to find yourself! Sign up for my list at the link below to get a notification when the post goes live.