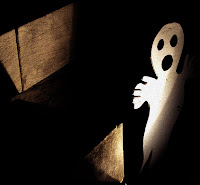 Since the beginning of January, I have posted a Friday Flash for each week of 2012, which is a total of eleven stories. However, of those eleven, only three have been non-horror related (one fantasy comedy, one slice of life, and one historical). The other eight have encompassed zombies, mummies, vampires, Gothic horror, evil puppets and as-yet-unnamed creatures who wear human skins. Is anyone else as surprised by that as me?

Back in the day, I called myself a horror writer. We’re talking back when I was about sixteen and didn’t know any better. I read Stephen King and Clive Barker, and I wanted to write like that too. Problem was, I didn’t really enjoy writing “gore”. It just didn’t seem to work for me very well. I stuck to my “weird fantasy” stories, writing about games of chess between celestial beings, or jewellery boxes that turned their contents into gold, and eventually put out my Checkmate & Other Stories collection, composed of those stories I’d had published online. Definitely not ‘slice of life’ or realistic, but not really horror either.

So time went by, and I branched out. I wrote historical stories, and ventured into steampunk, and wound up writing a pulp Western last year. I’m damned proud of The Guns of Retribution, but there’s always been a little tug back towards my roots – to the extent that its sequel, To Kill A Dead Man, sees Grey O’Donnell pitted against villains of a more supernatural nature. I hardly think it’s a surprise that I’d find myself back within the horror genre, considering I spend my spare time hunting ghosts, and studying haunted house films for my PhD – and that’s when I’m not reading about the psychological theories that underpin the horror genre as a whole. My life is pretty well steeped in Bizarro at the moment.

Or is it something deeper? I like to think my “craft” has improved since those first stories were published back in 2008, and I’m in a better place to write horror stories that get under the skin. Perhaps spending so long writing weekly flashes, and working on longer stories or novels, has honed my idea-generating skills to the point that I feel I’m better able to work with horror. Maybe my experiences with strange events, and my research into them, has given me better insights into what ideas will work, and what won’t. Or maybe the stressful nature of my life at the moment means that the stress has to come out somewhere – and it’s choosing to birth weird ideas from my imagination.

Either way, I want to ask a question. My work seems to fall into two major categories, and then a whole bunch of little ones beyond that. So what would people rather see from me – horror stories, or my historical tales?