Antenociticus bears the most marvellous Roman-sounding name. Yet there’s a very good chance he’s actually a local deity, adopted by the Romans once they arrived in Britain. 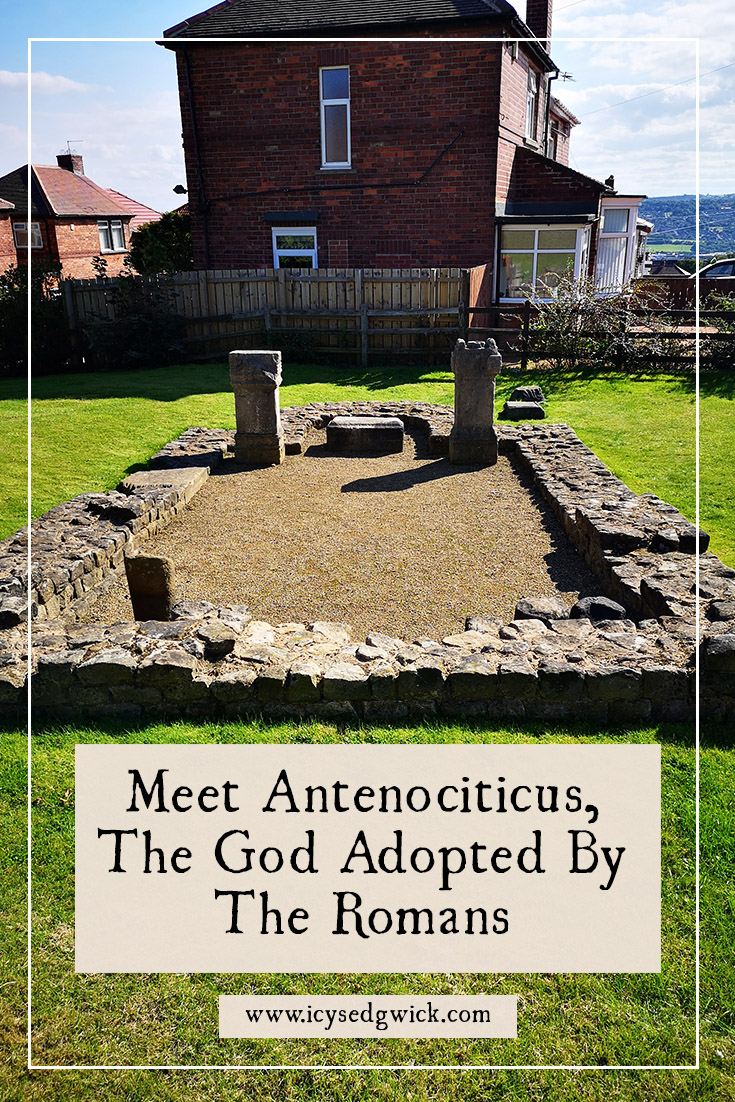 Yet he also poses several mysteries. He appears nowhere else in Britain. A high-ranking official dedicated an altar to him. And someone broke up a statue of him so all we have left is his head.

So who is he and why does he have a single temple in the whole of the United Kingdom? Come on then, let’s find out!

The Temple to Antenociticus Stands in a Housing Estate

Head west out of Newcastle upon Tyne’s city centre on the imaginatively named West Road. You’ll pass through Benwell, the true home of Byker Grove. (Yes, true story. The Mitre, used as the Byker Grove television set, is in Benwell. Not Byker. Totally opposite side of the city. And no, I don’t mind shattering your illusions)

Benwell’s Roman name was Condercum, and it was one of the 13 permanent forts along Hadrian’s Wall. The Roman heritage of the area lives on in Condercum Road, just off the West Road.

Beyond Condercum Road lies a 1930s housing estate. The land originally belonged to Benwell Little Park, owned by George Wightwick Rendel. In 1862, he excavated on his land and discovered a Roman temple.

60m west lay the original Condercum fort. None of it remains, no doubt swept away by the Victorian building craze. Yet the Temple to Antenociticus somehow still survives. It stood in the vicus, the civilian settlement next door to the fort.

And you can still pay a visit.

It looks a bit odd to see the remains of a Roman temple beside a normal back garden. But that’s Newcastle for you.

The Society of Antiquaries of Newcastle upon Tyne removed the original three altars. They’re now on display in the Great North Museum: Hancock. Those on view in the temple remains are concrete casts, replaced in around the 1930s.

What was found in the Temple?

Experts believe the temple dates to 178-180 AD. It originally stood in the vicus, or civilian settlement alongside the fort. This is a similar position to the temples to deities like Jupiter Dolichenus and Mithras. These deities weren’t part of the ‘official’ state religion, but people still wanted to honour them.

So what did they find in the temple ruins?

Cavalry prefect Tineius Longus dedicated one of the altars to Antenociticus. Designated as a quaestor, this meant he could wear a senator’s stripe on his toga. Paul Bidwell believes he dedicated the altar to celebrate his promotion (no date). Scholars believe Longus could have built the whole temple to mark his promotion. Martin Henig notes that it’s actually these individuals that leave us with the best evidence for the Romans’ religious practice (1995: 59).

Soldiers dedicated the other two altars. One was a centurion of the 20th Legion and the other was a prefect of the first cohort of Vangiones. Seeing these dedications by high-status individuals hints that perhaps this was no ordinary form of worship. Perhaps Antenociticus commanded a high-end cult, befitting the status of a senator (Aldhouse-Green 2018: 73).

Part of a Statue

The excavations unearthed the head of a god, as well as the altars. The dig also revealed a lower leg and parts of a forearm. That implies a full statue of Antenociticus once stood in the temple. Great North Museum note that “giving gods a human form was a Roman practice and was rare in pre-Roman Britain”.

Miranda Aldhouse-Green points out that the two curved locks of hair have caused consternation for scholars. Some think it’s a specific hairstyle, others think they represent horns. Add that to the remains of a neck torc, and people start making links with the Celtic god, Cernunnos (2018: 74).

Archaeologists found a similar head during excavations at Binchester Roman Fort, County Durham. They can’t name theirs as Antenociticus but the resemblance is there. For Dr David Petts, discussing the Binchester head, the artistic style of the statues shows a blend of local traditions and classical Roman art (Durham University 2013).

Unlike the statue found in Benwell, the head found in Binchester may have come from a shrine in a bathhouse. If it is Antenociticus, it shows his popularity with ordinary soldiers. It’s a far cry from the pomp and circumstance afforded to Jupiter by the Roman legions.

A coin dated to the period of Marcus Aurelius also emerged during the excavations. Evidence of burnt timbers suggested arson destroyed the temple in the 2nd century.

The dig found three skeletons in the temple’s apse. They lay “side by side, the heads west, the feet east. The width of the recess is but five feet, and the remains shewed that the bodies had been slightly bowed to get them into their resting-place” (Rendal 1865: 169). Evidence also suggests Anglo-Saxon settlers re-used a small nearby cemetery. That’s unusual in northern England.

We find no mention of Antenociticus anywhere else in Britain or the rest of the Empire. Aldhouse-Green does note that the Vangiones came from northeast Gaul (2018: 74). Though if they brought him with them, there’s no evidence of him in their homeland.

Many believe Antenociticus was a local deity adopted by the Romans. Aldhouse-Green also suggests he may have been one of several gods ‘invented’ along the wall (2018: 74). These gods seemed to be an amalgam of existing gods, designed to suit a given a need.

Though his specific location in Benwell would seem to make him far more localised than these manmade gods. There’s not a lot written about Antenociticus. Some suggest people worshipped him to provide inspiration in war. Others believe he was a favourite for interceding in military business.

Which makes sense if you’re based in a Roman fort.

His worship didn’t seem to last long. Yet someone buried the altars facedown in a corner of the temple. This was a common method for disposing of ritually important religious objects. Someone broke up his statue but left his head intact. As Aldhouse-Green points out, the head was “an important cult-signature in Roman Britain” (2018: 75).

You might argue that a Roman god with a single temple isn’t important. I disagree. The style used to carve his statue shows a local willingness to adopt Roman stylings. And it must have been the work of a local. You see similar evidence in jewellery, combining regional styles and Roman influences.

But having an entire temple, albeit a small one, dedicated to a local deity? This is incredibly rare. It’s a very different picture from Cocidius and Belatucadrus. These local war deities became twinned with Mars. For Antenociticus to stand apart, it implies the Romans considered his ‘function’ to be somehow separate.

It does demonstrate the Roman tendency to arrive somewhere near and fold local deities into their own pantheon. They didn’t always impose their belief system on their new subjects. Instead, they let the influence go both ways.

The dedication to Antenociticus baffled the Society of Antiquaries of Newcastle upon Tyne. During an 1863 meeting, they noted that “[t]he most popular god amongst the Brigantes and Ottadini seems to have been Cocidius. A dozen altars, at least, have been found dedicated to him” (Clayton 1865: 197). They weren’t sure what Cocidius ‘did’, and the same went for Antenociticus.

Yet we now know that Cocidius was a war god. The Romans often twinned him with their great god of war, Mars. As we’ve learned more about Cocidius, might we one day learn more about Antenociticus?

We do need to remember one thing. There are no statues or figures that archaeologists can identify as pre-Roman deities from Iron Age Britain. Scholars believe the Iron Age Britons didn’t see their gods in human form, seeing them instead embodying the landscape. We only learn the Celtic names once the Romans arrive and bring literacy with them (Newcastle University, no date).

As a result, we can only assume that the deity even existed before the Romans arrived. The horns on Antenociticus’ head and his facial features appear to be ‘Celtic’ features. Yet it’s still just an assumption that this means he belonged to the Iron Age, captured for posterity by the Romans (Newcastle University, no date).

Enjoy this post? Sign up below to be notified when a new folklore article goes live. You’ll even get my guide to home protection using folklore methods as a welcome gift!

Newcastle University (no date), ‘How the new Wall gods came to be: the case of the Veteres’, FutureLearn, https://www.futurelearn.com/info/courses/hadrians-wall/0/steps/5128.