There can’t be many things more welcoming than a roaring fire in the middle of winter. Snow lay heaped in piles outside, but we warmed ourselves in front of the small parlour’s hearth. A grandfather clock in the corner ticked away the minutes, and dull chatter floated through from the main bar of the saloon next door. 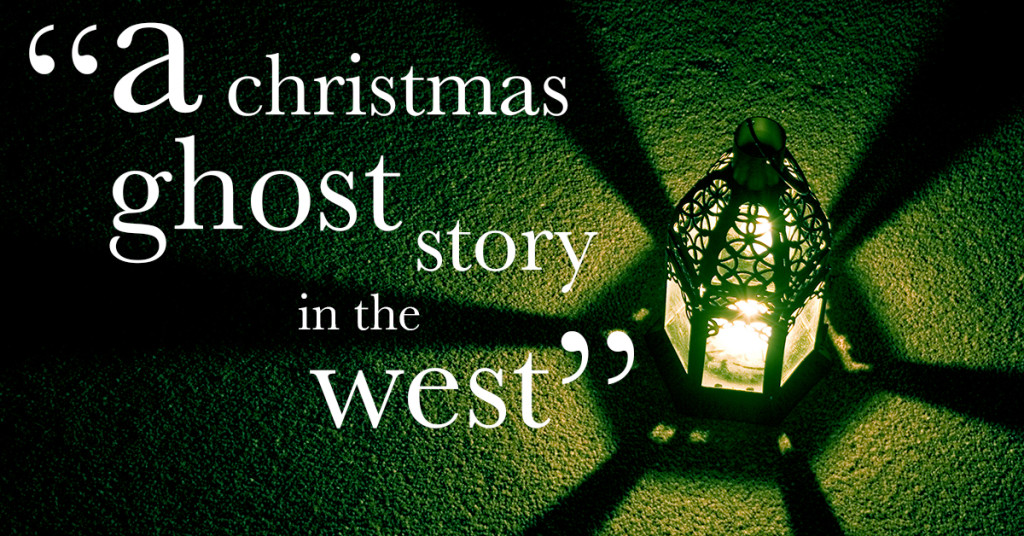 “Mine too. Said that’s what everyone did back in the old country,” I replied. My mother was mighty keen on keeping that English tradition going, even in the middle of Arizona. I spent hours trekking through the woods up in the hills looking for the right tree.

“Christmas was the only time the whole family got together. Christmas, and funerals,” said Billy. “My uncle used to get us round the fire, and tell ghost stories. Say, do you know any?”

“You must know one! Come on, boss, it’d be just like my ol’ family Christmas. It ain’t right without a Christmas ghost story.”

Billy stared at me with that wide-eyed smile of his, and what can I say? I couldn’t refuse.

“I can’t tell you stories, but I sure could tell you somethin’ strange as happened to me one year.”

“I do believe I did. See, my grandma came over to America with my folks, and she always used to tell me stories. I never knew what was real and what she made up, but she always said the dead carry lanterns. Big ol’ heavy lanterns, with a flickering green light inside, so they can light their way to the other side.”

“That’s creepy.” Billy’s smile faltered, and he swirled the dregs of his coffee around his mug.

“That’s what she said. I never paid it no mind, she said all kinds of crazy things, y’know? Anyway. A few years back, I must’ve been about fifteen, I went up to the Apache lands to do some tradin’ for the town. I did my business, and headed back to town just after it got dark.”

I knocked back the last of my own coffee, feeling the warm gritty liquid slide down my throat. Billy stared at me, those whisky fire eyes eager for more of the story.

“I remember ridin’ back, the snow reflectin’ the moonlight so it was clear as day, when I saw someone by the side of the trail. When I got up close, it was a young woman, just standin’ there in the snow. Pretty little gal, though not a real beauty like Peggy Marsden. The little lady was just a shade too pale, her big eyes dark in that white face of hers.”

“What was she doin’ out there?”

“I asked her. She didn’t hear me at first, just looked at me like she’d never seen a man before. I asked her if she needed help, and eventually she said she was lost. She didn’t know her name or where she lived, so I offered to take her into town. She wouldn’t get on the horse, but just walked alongside, holdin’ on to the bridle.”

I shivered. I hadn’t thought about this in thirteen years, and come to think of it, Billy was the first person I’d told.

“We got down the trail, right to where it forks in two, and she just stopped. One road went to town, the other led to the river. A few folks had farms along the river road, and when she pointed to the signpost, I figured maybe she belonged to one of them, and she’d realised where she was.

“It took me a couple of minutes to realise she was pointing at the bottom of the signpost. Somethin’ lay in a heap, covered in snow. She kept starin’ at me, and jabbin’ her finger, so I got off the horse and looked. I think my heart stopped for a minute when I brushed the snow off a cold, dead face. The same face that belonged to the girl I found by the side of the trail.”

Billy gasped. I nodded, staring into the fire. The warmth of those flames did nothing to banish the chill I felt just thinking about that poor little lady.

“I turned to look at her, and she just stood there, starin’ down at me. She was finally lookin’ at me, instead of through me, and my heart just broke to see her lookin’ so sad. But afore I could say anythin’ she brought an old lantern from behind her back. A green flame flickered behind the glass, and she walked away from me. I kept watchin’ that flame until it disappeared into the night.”

“What did you do?” asked Billy.

“I dug her body out of the snow and rode into town. Told the marshall I came across her as I was ridin’ home. Turns out she’d been out lookin’ for a Christmas tree for her momma when a passin’ gang came across her. They dumped her body after they killed her.”

“That’s awful, boss,” said Billy. He stared into the fire. “Do you think she ever got to the other side?”

“I hope she did, otherwise that poor little gal’s still wanderin’ around out there.”

“I guess at least someone found her.”

“True. If I hadn’t found her then, she might’ve been there ‘til spring. As it was, a posse caught up with the gang. Some hung, some went to Yuma.”

Billy picked up his whisky.

“Little miss, if you’re listenin’, merry Christmas.” He raised a glass to the lost soul of Retribution. We toasted her journey to the other side, and drank in silence. I thought of her, and Peggy, and everyone else I’d known, and wished them all a merry Christmas too.

Merry Christmas from me and my bounty hunter, Grey O’Donnell! If you enjoyed this story, then his book, The Guns of Retribution, is available in Kindle format from Amazon US and Amazon UK.