It’s October so we’re now officially into the Halloween Build-up! Each Monday I’m going to post horror related content, and this week we’re looking at classic horror movies! There are various arguments about what year ‘modern horror’ begins, which will be another post for another time, but for this post I’m going with the 1968 cut off point.

Classic horror doesn’t have the guts and gore of the Saw franchise, and you can forget the never-ending Paranormal Activity cycle with its endless shaky cam and wooden dialogue, here are five classic horror movies that I think you should watch this Halloween!

You wouldn’t think that two years later, director Robert Wise would go on to make The Sound of Music, so chilling and creepy is The Haunting. Based on the Shirley Jackson novel, ‘The Haunting of Hill House’, this film tells the story of a parapsychologist who assembles a group of volunteers at the vengeful Hill House in an attempt to discover proof of the supernatural.

Eleanor ‘Nell’ Vance (Julie Harris) is the most susceptible to the influence of the house, and slowly begins to unravel as it works its eerie magic on her. The biggest star of the film is perhaps Hill House itself, but there is no awful CGI (as there was in the 1999 remake), just good old fashioned sound effects and taut tension! This is an often underrated little gem, based on the short story ‘Casting the Runes’ by M. R. R. James. Also known as Curse of the Demon, Night of the Demon tells the story of psychologist Dr Holden (Dana Andrews) who is cursed by occult practitioner Dr Karswell (Niall MacGinnis). Skeptical Holden soon learns to put his cynicism aside as he must figure out a way to undo the curse and thus save his life.

Directed by Jacques Tourneur, who also directed the 1942 classic Cat People, the film uses shadows and suggestion to hint at an occult world alongside our own, a place where logic and reason have no effect, and demonic forces lurk. The plotline was later re-used in the utterly unforgettable Drag Me To Hell (2009).

There have been many representations of the Count, and while Bela Lugosi’s 1931 turn is perhaps the most iconic, my favourite is that of the late Christopher Lee, in his second outing for Hammer Films. Jonathan (John Van Eyssen) is a vampire hunter bent on Dracula’s destruction, but after he kills the Count’s bride (Valerie Gaunt), Dracula decides to steal Jonathan’s fiancee Lucy (Carol Marsh) as revenge. Enter the indomitable Peter Cushing as Van Helsing to set matters right.

Where Lugosi was the consummate foreigner, Lee brought English nobility and poise to the role. Both charismatic and dominant, Lee’s Dracula paved the way for the many seductive versions of the Count that would come plater. Plus Peter Cushing is just too cool as Van Helsing. 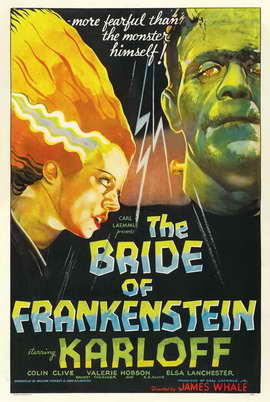 It was the earlier Frankenstein (1931) that turned Boris Karloff into a star, but the 1935 sequel was director James Whale’s masterpiece. Brimming with dark humour and crackling with the intensity of Colin Clive’s performance as the prototypical mad scientist, Bride tells of Frankenstein’s decision to build a mate for his erstwhile creation.

Frankenstein’s focus on his artificial woman at the expense of his wife led many to assume the creature’s mate was Frankenstein’s own bride, and Elsa Lanchester’s hair and costume at the film’s climax has become truly iconic. Karloff brings pathos and humanity to his role, turning the Monster into a pitiable creation, while Clive’s twitchy performance has never been bettered. Classic horror at its absolute finest.

Black Sunday (aka The Mask of Satan, Revenge of the Vampire) (1960)

Starring the incomparable Barbara Steele as evil witch Asa, Black Sunday is an Italian classic horror from director Mario Bava. Full of family curses, a heroine who is the physical double of the evil witch, and a villainness intent on immortality, the film is Gothic excess at its absolute finest.

Horror is normally more synonymous with male performers, such as Vincent Price, Christopher Lee or Boris Karloff, and Barbara Steele was one of the few actresses who carved out a niche playing seductive but evil monsters. Playing the dual role of Asa and her descendant Katia gave Steele the opportunity to show off her dramatic range, and she certainly turns in a memorable performance in this film which manages to be both cheesy yet highly effective.

What classic horror films would you recommend?