Humanity has gazed up at the stars for thousands of years. What are they and why do they appear in that pattern? Can they predict events here on earth, and can we build a relationship with them? Turns out there’s far more to star gazing than just the origin myths of the zodiac! The other stars have constellation origin myths, preserving the stories of each culture in the heavens. 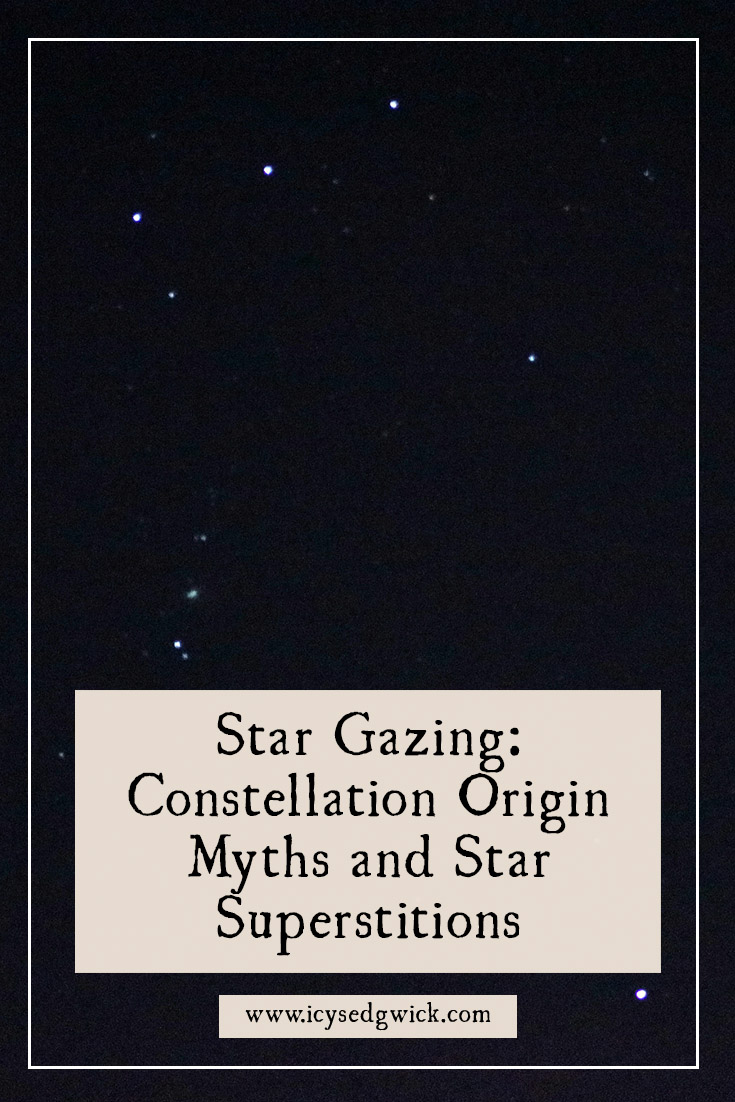 In this post, we’ll look at the Greek origin myths of a selection of the constellations. That’s because it’s really the Greeks who turned the foundations laid by the Babylonians and Egyptians into a structured system.

And it wouldn’t be a folklore post without looking at a handful of superstitions regarding the stars! Hit ‘play’ below to hear the podcast episode of this post, or keep reading.

I wanted to include a range of constellations for this post, following the zodiac origin myths. We’ve already covered some of the more famous or easy-to-find ones, like Ophichus, Centaurus, and Orion. So I’ve chosen a few that work well together, and also aren’t solely in the northern hemisphere.

You’ve probably heard of the Big Dipper, and you may even be able to find it. Great! Now you can find Ursa Major since the Big Dipper is part of Ursa Major. Ursa Minor is often known as the Little Dipper.

What’s fascinating about the Great Bear is just how many cultures gave this constellation a name that translates as ‘bear’. It’s particularly odd since bears don’t have the long tail implied by the constellation. That said, in England, it was once called Charlemagne’s Wain (Olcott 1936: 349).

But how about its Greek origin myth? We need to go back to the nymph, Callisto. She caught the eye of Zeus (yep, him again), which enraged his wife, Hera. But there was another problem, even greater than Hera’s wrath. Callisto was a priestess of Artemis, the virgin goddess of hunting. One day, Zeus took the form of Artemis and appeared to Callisto. She gladly threw herself into what she thought was Artemis’ arms…only to find herself with Zeus instead. In some myths, he rapes her while still in the form of Artemis. In others, Callisto knows it’s Zeus.

A few months later, she was bathing naked when Artemis saw her. The goddess was furious to see her supposedly virginal follower now pregnant, and cast her out. She wandered the world alone before giving birth to her son, Arcas. Never one to withhold insult from injury, Hera turned Callisto into a bear. Many years later, Arcas came across a mighty she-bear and pursued her through the forest. Zeus finally intervened before Arcas could kill his mother. They became the Great Bear and the Little Bear (Fry 2018: 303).

Other versions of the myth see Artemis change Callisto into a bear as punishment (Hard 2015: 4). In another, Artemis kills the bear and places it in the stars when she realises it’s Callisto (Hard 2015: 5).

The two constellations circle the north pole because Hera got Tethys and Oceanus, rulers of the sea, to stop the Bears dipping below the horizon (Olcott 1936: 352).

The constellation of Draco, the Dragon, lies between Ursas Major and Minor. He’s sometimes also referred to as a serpent, and William Tyler Olcott connects it with the snake in the garden of Eden (1936: 185).

So how on earth can such a reviled creature be found in the heavens? As Olcott says, “[t]here seems to have been a special effort on the part of the originators of the constellations […] to symbolise by a star group the presence of the Evil One” (1936: 188). His whole purpose was to watch over the mortals below, both menacing those who would do evil, and reminding others of original sin.

For some, he’s the guardian of the stars. In one legend, Hera presented Zeus with golden apples on their wedding day. Draco, having been the guardian of this precious fruit, was rewarded by being placed in the sky (Olcott 1936: 187). Elsewhere, Hercules killed the dragon, and the pair were put in the sky, re-enacting the moment of Draco’s death over and over (Olcott 1936: 187).

In yet another legend, he’s the very dragon killed by the Greek hero Cadmus. Zeus had previously spirited away his sister Europa as a bull. Cadmus killed the dragon, sowed its teeth in the dirt, and warriors sprang forth as a strange harvest.  Either way, he coils around the pole as a guardian of the heavens.

Cassiopeia is also known as The Lady in the Chair, due to the shape of the constellation. She’s easy to spot because she looks like an M or a W near the North Star. Thanks to the rotation of the Earth, Cassiopeia sometimes looks like she’s upside down. According to Olcott, the sea nymphs placed her in the heavens like this to make a point (1936: 125).

Why would they be so spiteful? Because Cassiopeia is the queen who boasted that she and her daughter, Andromeda, were more beautiful than the nereids. To punish the humans for their arrogance, Poseidon sent his sea monster, Cetus, to destroy their city. Only the life of Andromeda could pacify Cetus.

Instead, Perseus arrives to kill Cetus to save Andromeda. In some myths, he uses Medusa’s head to petrify the monster. In others, he uses his sword in a more old-fashioned form of monster-slaying. Either way, Cetus was placed in the stars, both to commemorate Perseus, and for its enormous size (Hard 2015: 106). Cetus is the whale-shaped constellation visible between the equator and the Tropic of Capricorn.

Perseus and Andromeda are nearby in the heavens. Only Cassiopeia has the indignity of ending up upside down.

The Southern Cross is an asterism in the Crux constellation—an asterism is a pattern of stars that isn’t considered a constellation by itself. You can find it in the sky near Alpha Centauri and Beta Centauri in the southern hemisphere.

The ancient Greeks, following the 2nd-century astronomer Ptolemy, believed Crux to exist within Centaurus. But by 400 AD, Crux was no longer visible from most of Europe. Some even believed that the celestial cross disappearing from the sky coincided with the crucifixion (Constellation Guide 2020).

Now, the constellation carries more cultural significance for those countries in the southern hemisphere. The Inca called it Chakana, which means ‘the stair’, and a stone image of it was found at Machu Picchu in Peru. it’s also represented on the flags of Australia, New Zealand, and Brazil.

So those are some of the Greek constellation origin myths. There are 88 recognised constellations, and we covered the 12 that make up the zodiac in the previous posts in this series. Narrowing it down for this post wasn’t easy!

But let’s get on with the superstitions and folklore related to stars. How did ordinary people relate to the celestial environment?

Be Courteous to the Stars

Everyone has heard that you should make a wish when you see a shooting star. People differ as to the reason why. Yet some legends say it’s a soul released from Purgatory, or a new soul falling to Earth (Dillon 2001: 72). People once believed the Milky Way was the road that led souls to heaven (Dillon 2001: 71).

But speaking of falling stars, if you see one, say ‘money’ three times before it burns out. You’ll soon find your wallet isn’t empty! (Webster 2008: 244) And it’s not just shooting stars that are lucky. Make a wish on the first star that shines after dark (Webster 2008: 245).

Stars and the Weather

We’ve talked before about weather superstitions. Even stars were useful for checking what weather was on the way. The appearance of Sirius foretells drought, while harvests will be poor if the evening star rides low (Dillon 2001: 72). If you’re wondering if rain is on the way, look to the constellation of Cancer. If the sky is clear but you can’t see the constellation’s Beehive cluster, rain is coming (Rao 2011).

Alternatively, look at the moon. Is there a ring around yet? If so, count how many stars are inside the ring. One means clear days ahead. If there are several, they tell you how many days in the next week will be wet (Thomas 1920: 198).

The stars can often be the one constant in our lives

Humanity has looked to the heavens throughout every culture, and the stars have been an ever-present part of our shared experience. Whether you believe in their ability to foretell events or shape human destiny or not, the stories preserved about them offer a fascinating window on our past and present.

As we read the stories ascribed to them, we can always ask ourselves what they tell us that might be relevant to us today.

Do you have a favourite constellation? Let me know below!