Seashells evoke days at the beach and the beauty of nature. In other cultures and times, people used shells as both currencies, and as decoration. Look at the Italian grottoes festooned with seashells that gave us the word ‘grotesque’.

They’re also useful in other ways. Neptune’s son, Triton, used a conch shell as a trumpet. In Lord of the Flies, the conch shell comes to represent civilisation and democracy. Ralph uses it to call meetings, and when it breaks, it heralds the boys’ descent into disorder and chaos.

But shells are also the remains of living creatures. This gives them a liminal quality, which can affect the folklore that we find around them.

Let’s dive into all things seashell and pearl! Hit ‘play’ to hear the podcast episode of this post, or keep reading.

The Scallop Shell and St James

If you walk the Camino de Santiago pilgrimage route, you’ll notice scallop shells on the markers. In the past, priests gave pilgrims scallop shells when they arrived in Santiago de Compostela to prove they’d completed the walk.

Shells represent St James, patron saint of fishermen. There are a few theories why this might be. In one legend, merchants in the Middle Ages began selling shells as souvenirs to pilgrims (Wanda n.d.).

Another legend has St James curing a knight’s throat disease by laying a scallop on his neck. This was one of the 23 miracles St James performed. People started hanging scallops above their beds or near where animals drank (Wanda n.d.).

In another legend, a storm sank the ship carrying St James’ remains. His body washed up on the beach, apparently unmarked and covered in scallop shells (Wanda n.d.).

Scallop shells are also associated with the goddess Venus. Botticelli’s famous painting ‘The Birth of Venus’ sees her born from the sea standing in an open shell. It’s not, strictly speaking, her birth since she came from the sea fully grown. This is her arrival on land.

Is ‘She sells sea shells’ really about Mary Anning?

Nursery rhymes seem rife with peculiar origins stories. Look at the persistent claim that ‘Ring around the Rosie’ is about the plague (spoiler: it’s not). The ‘She sells sea shells’ rhyme is likewise saddled with an origin myth.

In this one, people repeat the claim that the myth is really about Mary Anning. For those not in the know, Anning was an English 19th-century palaeontologist. Because of her working-class background and status as a woman, many of her achievements were claimed by male scientists (Winick 2017).

But she actually helped to discover categories of dinosaurs, including the pterosaur and plesiosaur (Winick 2017).

And many websites have also made the claim that Anning’s work inspired the tongue twister. As Stephen Winick points out, we should be suspicious when no one provides any evidence to support their claim.

Various sources, including QI and Mental Floss, claimed the tongue twister was originally a song, written in 1908 by Terry Sullivan and Harry Gifford.

But there’s no evidence that Sullivan wrote the lyrics about Anning’s life. Many of the articles say things like “it’s believed that” or “many say that” when making the link to Anning.

And, to add insult to injury, Terry Sullivan didn’t invent the tongue twister in 1908. It was already a folk saying by 1908, and he simply turned it into a song. Winick found the phrase ‘she sells sea shells’ in an 1855 elocution manual. By 1871, it was described as a tongue twister. The longer version, including ‘by the seashore’, dates to 1898 (Winick 2017).

Mary Anning’s contribution to science is worth a lot more than a tongue twister that isn’t even about her.

The folklore of shells wouldn’t be complete without superstitions!

Opening shell clams meant you’d have conflict in the family. If you were opening oysters and found some of them wouldn’t open, it meant money was coming your way, but you wouldn’t inherit it. You should only eat oysters when there was an ‘R’ in the month. To do otherwise meant you had financial problems. Opening shell oysters meant you’d hear about a death (Daniels 2003 [1903] I: 448).

If a large seashell roars, it means the sea is rough. Keeping seashells in front of the door will bring luck into the house. But it’s bad luck to keep them in the house (Daniels 2003 [1903] II: 1067).

Can you really hear the ocean inside a shell?

I think most people have heard the folk myth that you can hear the ocean if you hold a shell to your ear. While it’s a nice idea, it’s just not true.

The most likely explanation is that it’s ambient noise around you. The seashell captures it and it resonates, which explains why different shells produce unique sounds. Even cupping your hand over your ear creates a similar ‘ocean’ sound (HowStuffWorks.com 2001).

You can have hours of fun trying that in your next three-hour meeting that could have been an email.

We also can’t overlook the strange Shellycoat. This spirit appears in the folklore of Scotland and northern England. It favours streams and rivers. The name comes from the coat made of shells that it wears.

Sir Walter Scott puts the shellycoat in the ‘bogle’ category and considers it a water spirit (1839: 47). In one of its pranks, the shellycoat throws its voice, masquerading as a person lost in a river. The shellycoat only reveals the ‘jest’ when two people who tried to follow the voice to offer aid finally give up the chase. It seems the shellycoat enjoys hearty laughter when it successfully tricks someone.

Scott even considers the shellycoat “may, perhaps, be identified with the goblin of the northern English, which […] had the name of Barguest” (1839: 47).

Other folklore suggests that the shellycoat can remove his shell-covered coat. Doing so rendered the shellycoat harmless, although no human could pick the coat up (The Faery Folklorist 2016). While the tales vary, the shellycoat’s rattling coat of shells remains fairly consistent.

We can’t talk about shells without mentioning pearls. They form inside oysters when an irritant gets trapped in the shell. This is more likely a morsel of food than sand. The oyster coats the pearl with aragonite and conchiolin, the same materials it uses to make its shell.

Despite these mundane beginnings, pearls have become the material for the 30th wedding anniversary. They’re associated with wealth and luxury. As a result, they’re also part of various superstitions!

Put your pearls in a box with ash to stop them from turning yellow.

Pearls should turn white in clear weather. They are supposed to turn dull in cloudy weather.

If you wear a pearl necklace, it should attract love. In one superstition, pearls can ward off fire and bring success to business.

Rubies surrounded by pearls will bring wealth and honour to the weather. Wearing a scarf pin including a black pearl will cause friends to tell you their innermost thoughts. Black pearls, in general, bring good luck.

A cross of pearl can ward off evil spirits.

In London, you may encounter ‘pearly kings and queens’. This grew out of a custom made popular by costermongers. The leading families among the trade sewed mother-of-pearl buttons to black velveteen suits.

Now, the buttons are sewn onto the suits in decorative styles. Each borough still has a Pearly King and Queen, which is the eldest couple in that borough’s most respected family (Simpson 2003: 275).

What do we make of the folklore of shells?

Shells are an interesting material because they are ultimately the skeleton of the animal that lives inside, created by those creatures. But they’re what the creature leaves behind. So I can see why they would be considered bad luck for using within the home.

When you look at pearls, the fact that they’re a food that the oyster has then turned into something we deem valuable, shows what weird things humans put value on.

Now they are popular in other cultures and traditions, and Lilith Dorsey has an article on the meaning and use of cowrie shells. I’ve very much been focusing more on Europe because it’s what I know.

In terms of European folklore, it’s more down to the association with the saints and deities like Venus. Those links with the shells come through the link with the sea. The shell represents the ocean, even when that person or figure is far away from the water.

The shelleycoat being covered in shells while living in often freshwater areas speaks to the otherworldly nature of the shelleycoat.

Do you know any superstitions about shells or pearls? Let me know!

Daniels, Cora Linn (2003 [1903]), Encyclopaedia of Superstitions, Folklore, and the Occult Sciences of the World, Volume I, Honolulu, HI: University of Hawaii Press.

Wanda (no date), ‘The Scallop Shell And Other Symbols of The Camino’, Follow the Camino, https://followthecamino.com/en/blog/the-scallop-shell-and-other-symbols-of-the-camino/. 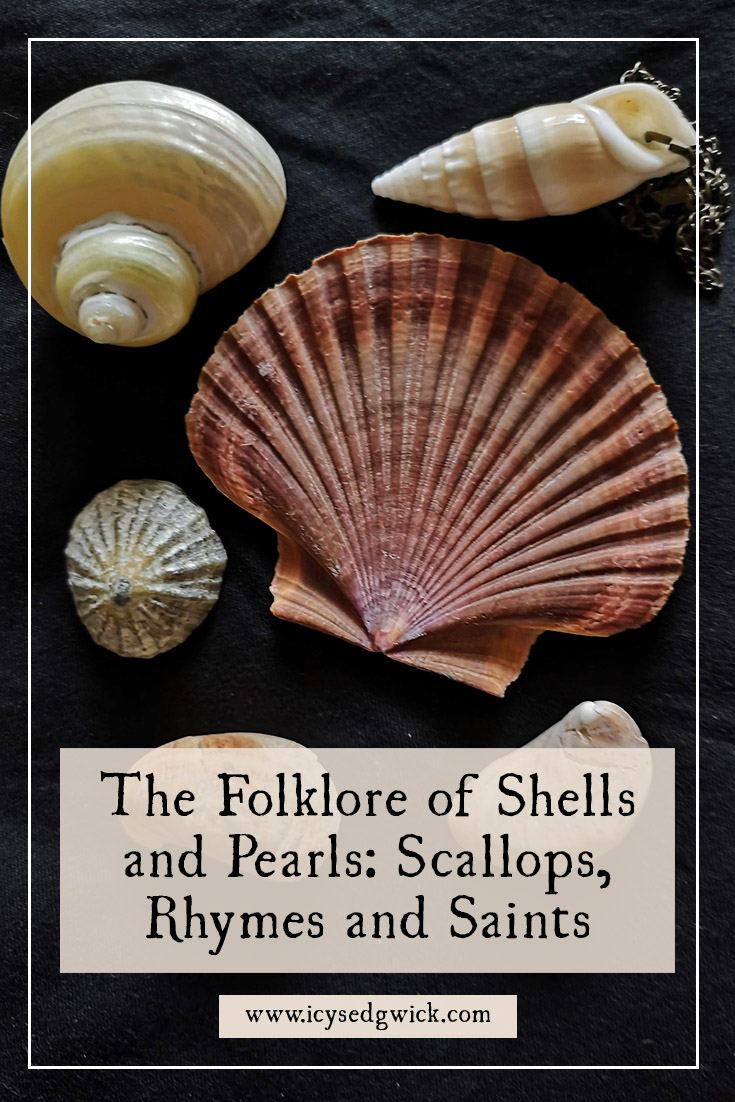