Freewriting is quite a trendy term for those who do journalling. If you’re familiar with the concept of “morning pages” then you’ve probably already tried it.

Morning pages, for those who don’t know, are the three pages that Julia Cameron advocates you write. They should be written longhand, in stream of consciousness.

If you haven’t tried it at all, freewriting is essentially the process of opening your brain and letting it spill onto the page. Which actually sounds a bit gross now I say it like that.

But freehand or keyboard – doesn’t matter what you use, just let the thoughts out. 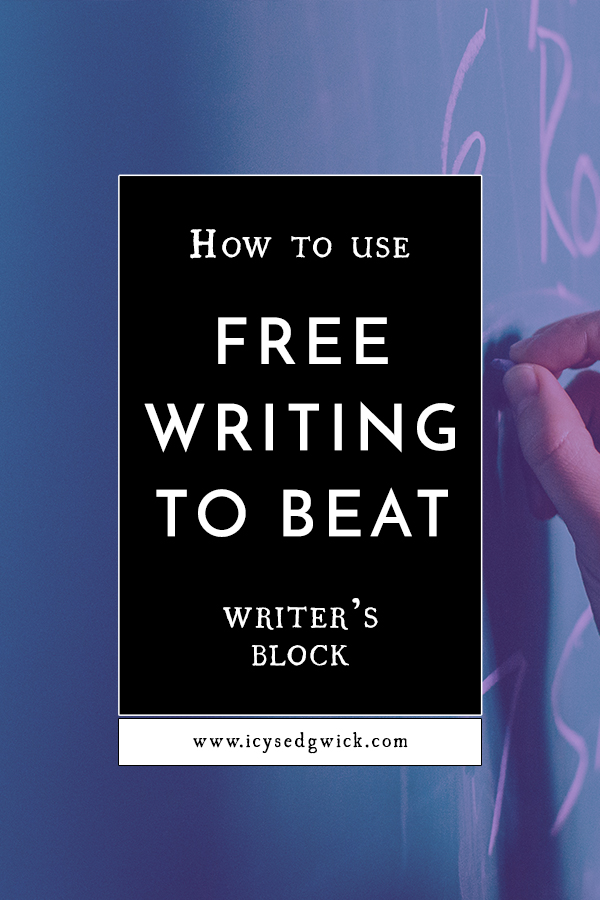 Rather than using it as an unplanned brain dump, how can you use freewriting to plot a new project or work around writer’s block?

Check out the video if you’d prefer to watch, or keep reading below!

Freewriting helps you to have a conversation with yourself.

Some writers use note cards to plot short stories or novels. Others use the note card feature in Scrivener.

I find I need to work out my thought process first. I like to work through the possibilities of an idea before I start. I’m going to use an example of one of my own stories here.

Note: This is not a flagrant attempt at marketing as it’s not even available yet. That’s why I chose it – no links to buy!!

So I’m fascinated with abandoned or forgotten spaces. The London Underground is full of them (as well as people who like to shove up against you while studiously avoiding eye contact).

One such space is the old British Museum station. The station itself is long gone. Passengers just use Holborn, Tottenham Court Road or Russell Square if they want the museum.

It was closed in 1933, but before it closed there were plenty of stories about ghosts. In particular, it was allegedly haunted by an Egyptian princess.

I’ve done a free fiction on this before, which you can read here. But what really caught me while I was doing research was the idea that a newspaper offered money to anyone who would dare to spend the night on the platform.

This is where freewriting helps with plotting.

So while freewriting, I might write something like, “I have my main character, he wants to try and win the bet. Why does he want to win the bet? He wants the money. Why would he need to win the money?

It’s 1933 so maybe he wants to put the money towards a wedding, or proposing to his fiance. So now he’s going to go into the station, and he could do X. But if he does X, then Y or Z might happen.

Alternatively there could be someone else in there with him. Who could that be? What might happen to them?”

And then I riff on that. For me, freewriting is constantly a way of saying “If I do this then X might happen”.

If this, then that.

It forces you to think about what the characters might do or say and what the logical implications are of that action.

One of the ideas that I come up with will get me excited and that’s the one I’ll run with. I’ll copy and paste the whole thing into Word, and then delete the bits I don’t want to use. It acts as a loose structure so I can write the rest of the story!

I don’t always freewrite before starting anything longer, which is idiotic at best but there you go. Luckily freewriting also helps if I get to a point in the story where I’m not 100% sure how to proceed.

In this case, I’ll write “I have X in this scenario, but I want them to be in that scenario, how do I get X from A to B?”

It’s similar to the plotting idea, except I’ve got the entire weight of the story behind me. I can think backwards to other things we’ve seen the character do, or things that have happened, and I can use those to link into where the story might go next.

Freewriting constantly relies on “I could do this…” to come up with possibilities.

This also works in reverse.

If you’re the kind of writer who thinks of the twist, or the ‘punchline’ or a story first, then freewriting can also help. Instead of working forwards, exploring where the story might go, you just work backwards. You’re investigating what might have happened to lead up to the part you already know.

Instead of being an explorer, in this case you’re using freewriting to be a detective. What was the likely sequence of events?

However you choose to use it, freewriting can be invaluable for idea generation, structuring stories before writing, and working through blocks. All good stuff!

Have you ever tried freewriting? Let me know in the comments!

What can you do with this image? Try freewriting!

Let me know if you use it!