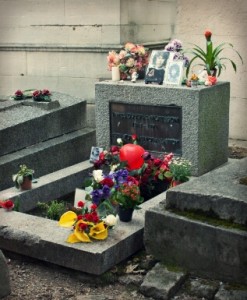 Ground mist crept along the avenues and lanes of the cemetery as the clock struck midnight, calling the luminaries to the Rond-point Casimir Périer. The shades of the great and good gathered around the monument, early arrivers taking up seats on the benches intended for the living that visited during the day.

A skeletal figure stalked to the centre of the circle, the bones of its left hand wrapped around a scroll. The figure, known only as the Monsieur, cleared his throat. No one knew exactly who he was, or had been, but the common belief was that he had been the first person buried in the cemetery. Why he adopted the form of a skeleton and not that of a phantom was beyond the understanding of any of the graveyard’s inhabitants, but either way, the Monsieur was a forceful presence. A hush descended on the gathering and the Monsieur uncurled the scroll.

“We have had a good day for visitors, my friends!” His voice was low and sonorous, echoing with the weight of the ages. A cheer went up from the assembled spectres.

“Does anyone have any interesting stories from the day, besides the usual tourists?”

A dapper gentleman clad in the garb of the third decade of the twentieth century stepped forward. A spontaneous round of applause rippled around the circle.

“Ah, Mr Méliès! Always a pleasure. How was your day?” asked the Monsieur.

“I did not have tourists, only film students. They left me some lovely letters. One of them even said that if it were not for me, there would not be a Lord of the Rings,” replied the gentleman.

“What is a Lord of the Rings?” asked the Monsier.

“It’s a trilogy of books, man. Someone must have turned it into a film,” replied the rock star who reclined on a bench.

“It must have many visual tricks if this student can link it to me,” replied Méliès.

“Then that is a very good day for you, Mr Méliès. Was there anything else?” asked the Monsieur, already scanning his list for visitor totals. 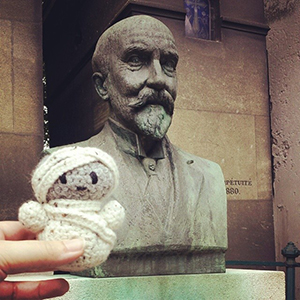 “Yes, just one. A girl with a strange accent had a small figure with her, and she took several photographs of this figure with my headstone.”

“What was the figure?”

“A sort of doll. I believe – and I know this sounds crazy – that it was some sort of Egyptian mummy.”

Nervous laughter broke out around the circle, but a loud Irish voice interrupted.

“I saw her too, beside my tomb. She thanked me for writing my books, and wanted to pass on greetings from her friends, Nerine and Carrie.”

The crowd turned to face the newcomer, a tall, familiar figure. The Monsieur nodded to him.

“Late as always, Mr Wilde, but you are welcome nonetheless. Have you any comments as to what we are to make of this person?”

“She is a writer, and writers are eccentric folk.”

The assembled shades laughed, well used to Oscar Wilde’s activities in the cemetery. The Monsieur nodded again and Georges Méliès stepped back among the crowd.

“I have the visitor totals for you all. Mr Wilde, you were yet again the second most visited tomb. Frederic Chopin was third, and Edith Piaf fourth.”

The dignified artist beside Méliès hung his head, and the filmmaker patted his arm.

“Never mind, Jacques. I heard someone say there is a party of art history students due tomorrow, and they will make a beeline for the great Jacques-Louis David! You’ll do well then,” he whispered. The artist nodded sadly.

“You don’t need to tell us who came first. Again,” said the composer beside Oscar Wilde. It was a constant source of irritation that the creator of the opera Carmen would continually fail when compared to a mere singer – and an American, at that.

“Indeed, Monsieur Bizet, our most visited resident for the day was Jim Morrison! Let him have a round of applause.”

The Monsieur bowed towards the singer. A smattering of applause broke out across the gathering, but irritated mutterings and whispered vexations ruined the moment.

“Hey, man, don’t get pissy with me. I don’t understand why these people come to visit me either. If I could send them your way, I would – they’re so noisy, I can’t get any sleep,” said the singer.

“I’m sure it’s a real chore,” replied Bizet, twisting his lip into a sneer.

“Has anyone ever stolen part of your grave? No. So quit whining.”

“Now now, gentleman. Tomorrow is another day, and the totals are reset to zero. We all have an equal chance of visitors, and you artists are always most popular than our distinguished scientists.”

“Has anyone got any suggestions about boosting visitor numbers? People need to know who we are. I don’t want to be forgotten,” said David, the melancholy artist. He was already slightly more transparent than Bizet, though not as transparent as some of the spectres around the circle. If he didn’t know who they were, how could visitors be expected to remember them?

“I overheard one of the visitors talking about putting photographs onto a thing called ‘Twitter’. Apparently anyone in the world can access them. Perhaps if people know where we are, others are more likely to come,” replied Wilde.

“It is something we will have to look into. For now, let us get some rest and reconvene here when the clock again strikes midnight!” The Monsieur clapped his hands and vanished, taking his scroll of visitor numbers with him.

The shades of the cemetery’s famous inhabitants drifted away, heading back to tombs, sepulchres and modest graves. Jim Morrison shook hands with Méliès, hugged Wilde, and ignored the jealous glares from his neighbours as he loped back to his grave. As he lay down and made himself comfortable, he chuckled that he had indeed broken through to the other side – though he could never have imagined it would be like this.