A piper sits in the square, huddled on the corner of a monument to a forgotten City Father. Passersby see his threadbare stockings through the holes in his battered boots, and they shake their well-coiffed heads. Pipers are not welcome among them, it seems. They tut at his moth-eaten tunic and mutter among themselves about his lifeless cap and torn mittens. He ignores them, focussing only on the pipes in his lap. His frozen fingers fly up and down the chanter, and he stares at the cold paving stones to avoid their stares.

Minutes turn into hours, and still the piper plays. He slides into a sea shanty. A group of passing navvies dance and jig in the square, and toss a few brass coins into the pot before his seat. He turns the shanty into a doleful funeral march that plucks at the strings of all but the hardest heart, and a small child drops a penny into the pot before her highborn mother can scold her. Soon the piper picks up the tempo and plunges into a frenetic polka. A couple that mirrors the piper in their poverty laugh and clap their hands, and they throw a ha’penny into his pot. For each of the givers, the piper spares a short smile, and their lives.

The piper plays all day, yet he never misses a note, and never skips a beat. He weaves music so beautiful it could almost be the faint shimmer that seems to light his corner of the piazza. The well-to-do among the citizenry continue to complain about his appearance, considering his ragtag clothes a disgrace to the fine square. How dare pipers come and entertain them! Yet they stand long enough to listen, long enough to enjoy. The piper ignores them all, but he has discerned tapping feet and suppressed smiles. 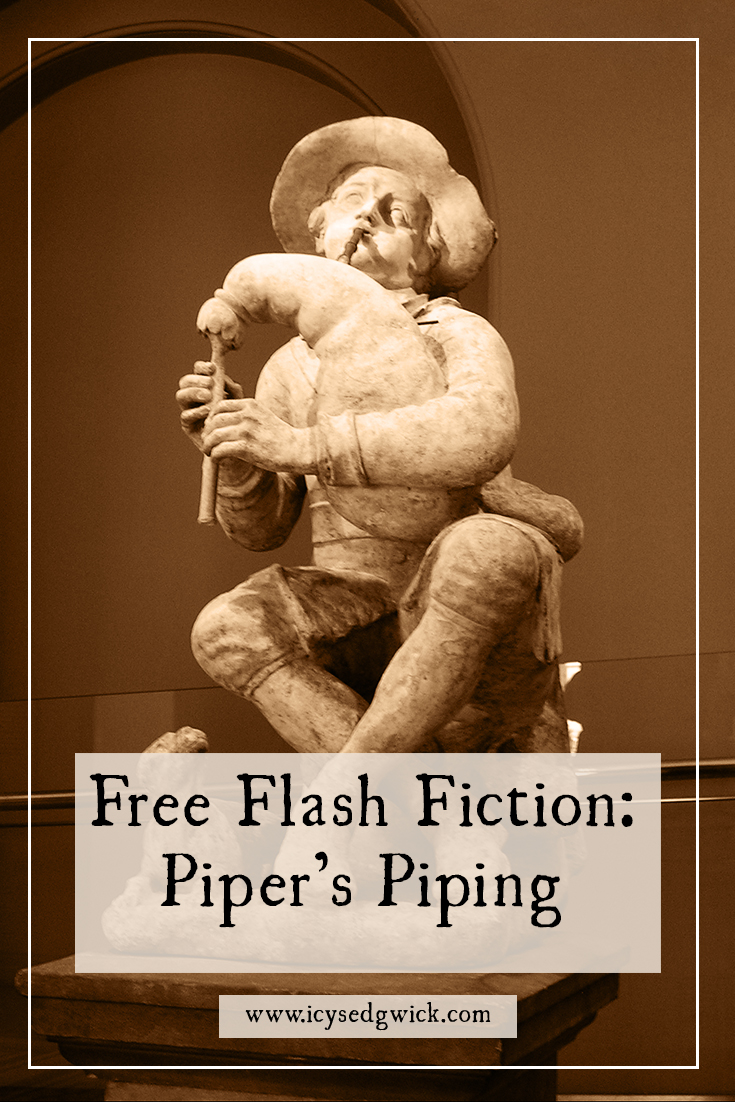 By the day’s end, the city’s workers have retired to their homes, or the taverns. Only those with fewer concerns can spare the time to listen to the piper. A handful of officials gather nearby, keen not to be seen listening to such vulgar music, but equally intent on enjoying it. None of them have added to his collection, nor have they offered to buy him supper, or pay to have his boots mended. The piper sweeps his gaze around the square, and contents himself that only those who have spent the day deploring his existence are present.

His music shifts again, this time cutting into a gentle waltz. The onlookers find themselves clasping hands with strangers, forced into pairs by the rhythm surrounding them. The dancers follow in each other’s footsteps as they glide around the square, compelled by the music to join the waltz. The piper continues to play, increasing the tempo. The waltzers must dance faster, and the embarrassed smiles and ill-concealed amusement begin to wane. As the waltz gains speed, the dancers struggle, and try to break free. Grins turn to grimaces, and panic rises to replace pleasure. Still the piper plays his song, and soon the dancers are running around the square. They roll their eyes and froth at their mouths in their efforts to leave, but still the waltz holds them in its grasp.

The first to expire is a corpulent bureaucrat, red and perspiring as he huffs his last. His partner, to her eternal dismay, continues to waltz, albeit on her own. Others do not fare better – they drop, one by one, landing in heaps on the stones as their partners keep the waltz going. A socialite is the last to go, who collapses in the square, a single word on her lips as her heart gives out.

The piper stops, and his pipes continue his melody for a few moments until they, too, fall silent. He looks down at the amassed corpses and scowls. No answer will be given now. They deserve no such attention.

He packs up his things and walks out of the square. He hums a tune as he turns into a side alley. A nice foxtrot should enliven his mood as he heads to the next town. Perhaps pipers are more welcome there.

If you enjoyed ‘Pipers Piping’, you might enjoy my collection of short Gothic stories, Black Dog and Other Gothic Tales! Or sign up below and get a free e-copy of Harbingers: Dark Tales of Speculative Fiction…