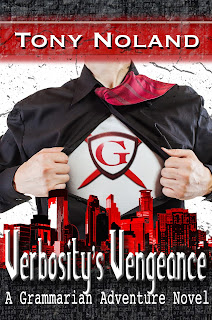 Superheroes are big business at the moment, though they’ve never quite made the leap from comics to novels. Hopefully Tony Noland’s new offering, Verbosity’s Vengeance: A Grammarian Adventure Novel, will make all the difference. I was lucky enough to beta read it for Tony and I can honestly say it’s an awesome read. So it’s my pleasure today to let Tony have a chat about the book!

Q. Welcome, Tony! Introduce your book for everyone.

The book is “Verbosity’s Vengeance: A Grammarian Adventure Novel”. It’s about the Grammarian, a superhero who uses grammar- and punctuation based powers. For example, he can catch a thrown hand grenade by projecting a full stop, slice through steel bars with a cutting remark, or contain an explosion with nested parentheses. He’s smart, fast and strong, but his pursuit of the nefarious Professor Verbosity is running into trouble. Verbosity is up to something big, and the Grammarian is going to thwart him… assuming he can hire a decent sidekick. He not only has to deal with interference from the Avant Guardian, a second-rate hero who wants to be taken seriously, he also has to deal with his own attraction to a beautiful college professor with a thing for superhero technology.

Q. Who is your intended audience and why should they read your book?

There’s an intersection of people who like superheroes with people who like clever wordplay and word nerd humor. This book is squarely targeted at them. If they like their superheroes to be realistic, with real world concerns about friends, jobs, and romance, so much the better. It’s a fast-paced adventure story that puts a lot of human in the superhuman.

Q. Tell us a little bit about your cover art. Who designed it? Why did you go with that particular image/artwork?

I worked with Sabrina Zbasnik for this cover. There were several concepts that we reviewed before settling on this one. I knew from the first that the cover had to tell the reader two things: 1) superhero, 2) grammar. I love this artwork. The chest reveal is wonderfully iconic, so much so that the big G becomes a wink and a nod to the entire superhero genre. The overlay of the hero above the city skyline packs a lot of visual information, especially as the cityscape is covered in words. The alliterative title is another nod to the adventure genre, being clear as to what kind of book this is, even as it fleshes out the image, introducing both the villain (Professor Verbosity) and the hero (the Grammarian).

Q. Who is your favourite character? Why?

My favorite character is Alex Graham, the man behind the Grammarian. He’s found his niche among all the heroes of Lexicon City and has the respect of his colleagues and the city’s criminal element. Even as he’s overworked by Professor Verbosity’s latest plot, he still wants to leave room in his life for romance. I don’t want to give away too much of the plot, but some of my favorite scenes to write were the interactions between Alex and Kate Hunter, the object of his affections. They both have secrets, so the process of building up mutual trust is delicate. I think I liked writing those parts of the book even more than the explosive fight scenes between the Grammarian and his enemies.

Q. Give us an interesting fun fact about Verbosity’s Vengeance.

It was based on a #FridayFlash story of 1000 words, which I used as the seed idea for a 52,000 word NaNoWriMo novel. This final book is 107,000 words, about average for science fiction. I’d hold this book up as an example to anyone with any lingering doubts about NaNoWriMo as a valid writing process.

Q. How about the writer behind the book? Tell us something about yourself.

I live in the suburbs of Philadelphia, PA. I’m middle-aged, married with four kids and a dog. No superpowers, unfortunately, unless you count double-jointed thumbs and the ability to wiggle my ears independently of each other. I like blue cheese, anchovy pizza, and hoppy beers.

Q. What can we expect from you in the future?

I’m working on a new novel, but I’d prefer not to say what it’s about. It’s also science fiction.

Q. And now, before you go, how about a snippet from your book?

A gruesome sentence flew toward the Grammarian, blasted from the barrel of Professor Verbosity’s latest weapon, the Concept Cannon. Festooned with a dozen hook-like prepositional phrases, the complex construct spun widely to ensnare the superhero. Anticipating the attack, twin thunderclaps exploded from the Grammarian’s gauntlets as he fired a powerful pulse of parentheses from one hand and a simultaneous shower of semicolons from the other.

The punctuations found their marks, creating nodal points that shattered the sentence into a cloud of fragments. With an electric shriek of memetic energy, the construct collapsed like an accordion. Discrete, unconnected phrases bent and flexed harmlessly around the Grammarian.

“Give up, Professor Verbosity,” he said. “You should know by now that sheer weight of words is no match for the power of punctuation!”

He shifted into a fighting stance and faced his opponent, who had backed to the far side of the room. Professor Verbosity lifted the Concept Cannon and pulled a lever. The barrel swiveled into an angular projection. Blue sparks shone along the length of the weapon as electronic circuits reconfigured themselves.

“Is that so, hero? Let’s see how well you can withstand my Redundancy Ray!”

“You need a new bag of tricks, Verbosity. I’ve already seen that a dozen times. Now, give up!”

The supervillain smiled in response.

“You always try to bluff your way out of difficulty, don’t you, Grammarian? I can’t say I don’t admire the attempt to win with words instead of brute force, but in this case, I’ll use both.” The weapon in his hand was now shaking with barely contained power, long plasma streamers flowing from end to end. “True, my Redundancy Ray is an old favorite, but I haven’t shown it to you since I added the Rephraser Refractor!”

Blue lightning exploded from the weapon. In less than a second, a million microfilaments of memetic concept energy wrapped themselves around the Grammarian. Knocked to the ground by the force of the impact, he had no chance to react before the energy coalesced into a single, coherent sentence. Within the densely convoluted word-construct, the Grammarian was immobilized.

It’s about time he pulled out a real weapon, the hero thought. If I’d had to duck and dodge much longer, he surely would have begun to realize that I was holding back.

Professor Verbosity laughed in triumph, delighted to see his foe struggling in the grip of the memetic energy his weapon was projecting. The Grammarian struggled even more vigorously and threw in a growl of frustration to enhance the effect. For a moment, he thought he might have overplayed the acting, but the hero could see that Verbosity was convinced of his triumph.

Supervillains are suckers for cliché, the Grammarian thought, every one of them.

“You’ll never win, Professor Verbosity!” He spit his archenemy’s name with obvious contempt. Pinned to the floor under the weight and complexity of shimmering word-memes, he fought for breath as his bonds grew ever tighter. Now, his gasping was only partly exaggerated for effect. Although allowing himself to be captured was part of the Grammarian’s plan to trick Verbosity into revealing his latest plot, Lexicon City’s smartest hero feared that that he’d underestimated his foe.

Professor Verbosity laughed. “Ah, my dear Grammarian,” he replied, “I have already won, insofar as the first and most crucial step in winning is to render you utterly and completely helpless. These sentences are not only long and complex enough to entangle you completely while you try to parse out subject and object amid the subtending and supporting prepositional and participial phrases, they are also perfectly correct grammatically, which renders you powerless to break free!”

Under the triumphant gaze of his nemesis, the Grammarian was indeed struggling, completely snared in the thick ropes of words. He tried to find some flaw, some grammatical mistake that he could exploit. With all his super-powered lexicographical might, he scanned and rescanned the sentence, though it was blindingly painful to do so. Being captured was part of the plan; being rendered unconscious was not. He wanted some avenue of recourse if he needed to go to one of his backup plans.

Unfortunately, Verbosity had gone to great lengths this time, figuratively and verbally. If only there were an inconsistent verb tense, a dangling or misplaced modifier, even an intransitive verb used transitively, but there were no grammatical mistakes to latch onto. The Grammarian needed to get to the bottom of his foe’s plot and time was running out more quickly than anticipated. 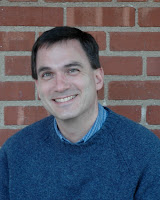 “Verbosity’s Vengeance: A Grammarian Adventure Novel” is on sale at Amazon for $2.99.

Tony Noland is a writer and editor in the suburbs of Philadelphia. His blog is at http://www.tonynoland.com, and you can find him on Twitter as @TonyNoland, and on Facebook at https://www.facebook.com/TonyNolandAuthorPage.