A funny thing happened on Saturday. A lot of my Twitter followers and Facebook friends started enthusing about the Western, purely because that week’s Doctor Who episode had a Western theme. It’s amazing, considering how many people said they weren’t interested in The Guns of Retribution because they “don’t like Westerns”.

The Western is a genre unique to America but it’s not a genre that appeals solely to Americans. I talked about this in one of my guest posts last week, but I think that the Western as a genre is not as staid or outdated as some people seem to think. The True Grit remake is more recent than the John Wayne films people seem to have in mind when they think of the Western, and look at the success of Deadwood or Hell on Wheels on TV. 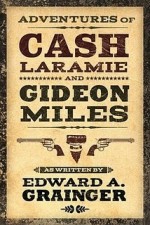 Within literature, the Western has never truly gone away, but there are definitely writers working towards making it a viable and popular genre once again. There is still a market for the more ‘classic’ Western tale, as the success of Edward A. Grainger’s Cash Laramie story collections proves. I’ve reviewed volume I and volume II on my blog and I absolutely love his US marshal, Laramie. Raised by Native Americans, and partnered by the black (and totally fantasic) Gideon Miles, the stories look at issues around race, while continuing to deliver adventure and action. Grainger has also taken the unusual step of allowing other writers to tell stories using his creations – Heath Lowrance wrote the fantastic Miles to Little Ridge, while Wayne D. Dundee wrote Manhunter’s Mountain. I think it’s this almost collaborative approach that stands testament to how supportive the Western community is.

Short stories certainly seem to be the way to go, and Matt Pizzolato’s collection, The Wanted Man, offers eight stories for just 99c. It’s available both for the Kindle and the Nook, as well as in paperback for $5.99. Four of the stories feature his antihero, Wesley Quaid, who now stars in his own forthcoming novella, Outlaw. But Pizzolato doesn’t just write fiction – he also edits The Western Online, dedicated to all things Western.

Thing is, I’m a firm believer than the Western is a genre that plays very well with other genres. If you like your historical romances, then Beth Trissel should be your go-to gal. Cowboys & Aliens proved that sci-fi works with the Western, and Back to the Future III did much the same. There’s even a sub genre, named the ‘weird Western’, and Heath Lowrance has two stories available that mix horror with the Western. Starring his hero, Hawthorne, they’re a good blend of generic elements and should appeal to fans of either genre. That Damned Coyote Hill was a spooky read, and The Long Black Train is the other Hawthorne title. Hopefully fans of the weird Western will appreciate my sequel to The Guns of Retribution, in which Grey O’Donnell fights a foe far stranger than a crooked sheriff. To Kill A Dead Man is on my ‘to finish writing’ list. In the meantime, you can always read my three-part Dead Man’s Hand, which is available for the Kindle.

I just hope that people will give the Western a chance – it’s a strong, vital and enjoyable genre, a heady mix of historical fiction and the action/adventure stories we enjoyed as kids. I’m not even saying that just to get you to read my book – I’m saying it on behalf of all of us.