Knowing how to choose locations is the easiest way to ensure the success of your world-building.

After all, writers often spend a great deal of their time concentrating on developing authentic dialogue. They need fleshed out, 3-dimensional characters. And they spend hours creating a coherent plot, contained within a sensible structure.

But what about setting and location? 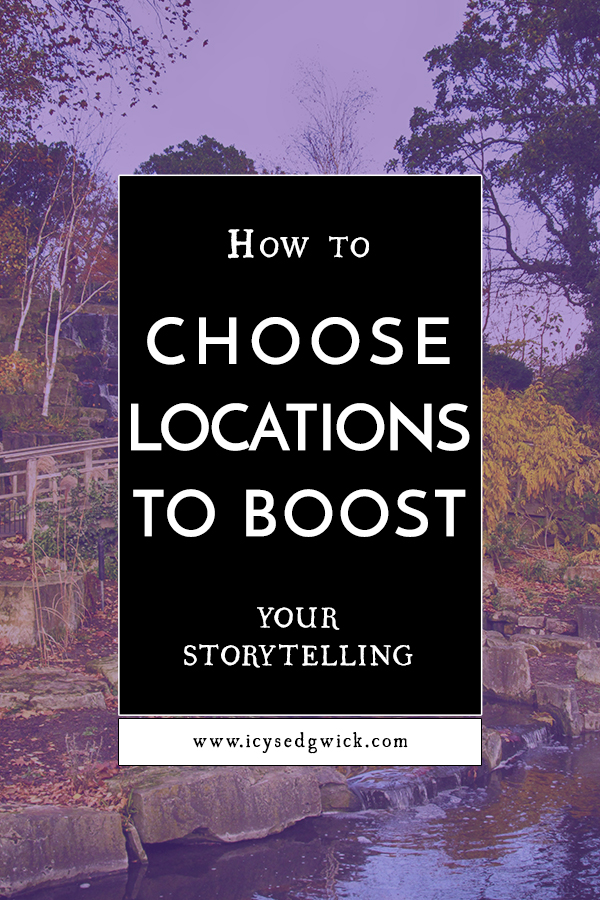 Setting is by far one of the most important parts of storytelling. Think how many stories begin with “In a faraway kingdom…” or “In a galaxy far, far away…”

Location, or setting, helps define genre. ‘The Wild West’ informs the Western, while noir is often set in grimy or shadowy urban landscapes.

But it also gives us a sense as to why things happen the way that they do – The Thing just wouldn’t work outside of the Arctic. Twister wouldn’t even be remotely plausible if it was set in the Home Counties of England.

Beyond that, the setting can almost become a character in itself. Mordor is a physical manifestation of the otherwise absent Sauron. The island and its moods in Lord of the Flies reflects the transformation of the boys.

How to choose locations

If you write fantasy, you have carte blanche to set your story wherever you want. Alice in Wonderland would be a perfect example! Swords’n’sorcery fantasy requires the kind of geography associated with the likes of Lord of the Rings – think castles, forests, plains, etc. Fairly generic, but as you don’t need to have visited, you get to decide what goes where.

You might write the kind of fantasy in which weird stuff happens to ordinary people. So you want to ground your story in a more realistic setting. After all, the weird events become more weird when set against a mundane background.

In this case, you’ll need more of a grasp of where your story is taking place. You can set it in your hometown and just change the names, or you can keep the setting intact.

If you’re stuck, check out my post on using where you live to generate ideas.

Using locations you know well helps to keep things believable. One of my many problems with 28 Weeks Later was how wantonly they screwed with London geography. 2 characters are supposed to get to Wembley from Westminster via the tube tunnels, despite the fact that they’d need to change lines on the way! Er, no.

Once you annoy someone in that way, it’s difficult to persuade them to invest in your story. You’ve broken the ‘suspension of disbelief’.

But what about places that you’ve never visited?

Joanna Penn deals with the idea of how to write about a real location if you haven’t been there. I highly recommend that you read her post – her suggestion about using Google Maps or Street View is a brilliant idea.

I’m a big fan of using Google Maps and Street View. When I wrote The Guns of Retribution, I spent hours exploring the ghost towns of the Old West that actually show up on Google Earth. There are a myriad of photo posts on sites like Urban Ghosts Media, not to mention images on Flickr, that help me to build up my mental picture of the location.

Sure, they won’t give you a feel for what it’s actually like to live there. But you’ll get the spatial dimensions and the aesthetics right.

Alternatively you could go down the Neil Gaiman route and give your location the Neverwhere treatment. Translate place names into their literal meanings (if you haven’t read it, I highly recommend it as a masterclass on how to choose locations). It doesn’t matter if you’ve never been as the places are given a whole new meaning by you.

You can also take settings you’re familiar with from visits, film or TV and combine them in a new way. I smashed together subterranean Edinburgh, Victorian London, and snippets of other cities to create the Underground City and the City Above in The Necromancer’s Apprentice.

That way, the reader will be familiar with aspects of your world. The locations aren’t completely alien or unbelievable for them.

If you’re working on a new story, work out where it will be set. Now you know how to choose locations, you can develop your plot based on the limitations of the setting. You can also populate it with characters that make sense within that location.

Of course, you could always treat yourself to a holiday and visit that pretty Alpine town you want to use as a backdrop to a 1920s murder mystery…

How do you choose the locations you use in your stories? Let me know below!

If you’re struggling with finding the motivation to write, then check out my free email course below!

Struggle to find motivation to write?

Maybe you know you want to write. But life gets in the way.

No matter how hard you try, you struggle to get going.

Struggle no more! My 6-part FREE email course will help get the words flowing again!