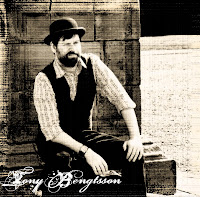 As part of my two week celebration of all things Old West, I thought I’d change the focus of my blog for a day, swinging the focus away from writing and onto music. I first encountered singer-songwriter Tony Bengtsson at a Wild West revue held at Bar Loco in Newcastle upon Tyne, and I’ve been a fan ever since. As his brand of Country really appeals to me, I asked if I could interview him here at the Blunt Pencil and he very graciously said yes! So pull up a pew and find out what makes this talented artist tick…

Sounds a bit of an obvious question, but what made you choose country as a genre, as opposed to more obviously ‘English’ genres?
Well to be honest I think it was more that Country, or at least Americana, that chose me. My dad used to listen to a lot of music and I just grew up listening to what he listened to. A lot of what he liked was 60’s poppy rock and roll but it was always artists like Kenny Rodgers and Creedence Clearwater Revival that stuck out for me. Real songs about real problems!

Also, Films and TV had a big influence. The film Convoy, and shows like The Dukes of Hazzard with WC McCall and Waylon Jennings singing the respective theme tunes, just did it for me! That and the whole load of cars and trucks chasing each other!

Nowadays it seems like a lot of the British music scene is more about fashion and what you look like, rather than having anything real to say. And that’s what I love about Country. It’s still real.

Do you think country as a genre has changed too much from its early days and is now just a form of pop music, or do you think there is enough wiggle room for artists to pursue a more traditional sound?
You’ll always have a pop version of any music genre. It’s all about making money by appealing to the lowest common denominator. That’s not to say all popular music is bad, but I do believe there is good and bad music. You could say that in the day, Johnny Cash was popular music. He made the charts, was a big name etc, but he stayed true to his roots as an artist, even releasing an album of hymns he learned from his mother!
Eventually genres cross and a lot of modern Country like Brad Paisley, Keith Urban and Taylor Swift is all very polished and hyper-produced, and can all be classed as pop. I don’t think this is a good or bad thing, it’s just what happens when technology improves and listeners are listening to more music than ever these days. Record companies have to compete in an ever growing marketplace so it’s inevitable I think.
On the other hand, you have modern bands like the Steeldrivers who are a wonderful example of original yet traditional bluegrass. So to answer your question, there’s always room to wiggle!

Is the reality TV format killing music, or will fans always go looking for the music that they like, regardless of what Simon Cowell tells them to buy?
I never know how to answer this question. I’m in two minds, but am a little more worried than I would have been say 20 years ago or more.

Firstly, TV ‘talent shows’ are in no way a new thing, we’ve had Opportunity Knocks and New Faces for years in this country, and they’ve spawned some good acts. However, we also had a thriving pub and social club network where bands and comedians could work their apprenticeship. If people wanted to be entertained they only had to go down the street and there’d be some form of live act on at their local. The difference these days is the lack of opportunity for young artists due to a few modern day circumstances like all night TV, cheap supermarket alcohol and economic recession which brings extra problems, like the closing of key entertainment venues and live music pubs.

All of this makes Saturday night Cowell fests all the more important to some people and as a result we’re slowly creating a culture of spoon fed perfectly recorded music to the masses and an increasing impatience of live music and what live music actually sounds like.

Luckily, I think musicians are a resilient breed and rather than caving in to these sorts of things will adapt and become more creative in their attempts to be heard, and as a result, fans will always go out of their way to look for the music that they like! I’m a fan at the end of the day and for me there’s nothing more exciting than discovering a new band and claiming them as your own!

Lots of artists make a name for themselves after their songs are featured in adverts. Would you ever sell one of your songs in that way, or would you prefer to be associated with movies/TV?
I’d love to hear one of my songs on an advert! As long as it’s not for McDonald’s or women’s products ha-ha! Seriously though I can’t afford to be too precious about my songs and if I thought somebody was interested in my music for an advert then I’d certainly consider it!

Obviously film and TV would be far greater kudos but we’ve all got to pay the rent right? What I will say however, is that I really don’t get how lame advert songs are at the minute! Far too light and fluffy for my liking!

Do you think digital formats and the Internet has made it easier for musicians to reach new fans as they no longer need to be signed to a huge label?
I think this goes hand in hand with the question about reality TV. The internet is a fantastic tool for unsigned artists as it’s a great way to have your music heard by far more people than playing your home town every week. It’s undoubtedly mad it far easier for musicians to reach new fans not only locally but worldwide!
If you’re savvy enough you can really make your music pay aswell. There are online distribution companies that will (for a small fee) distribute your music to places like Amazon, iTunes, Spotify and so on. Obviously people need to know you’ve done this – and this is where social networking sites come into their own. For next to nothing, bands can have a website, Facebook page, and a link to buy their album on Amazon and iTunes. That would have been unthinkable when I started playing in a band nearly 20 years ago!
Publicity and good friends are everything as an unsigned artist and your internet presence has to be big enough to stand out in this incredibly saturated independent music marketplace!

And finally, where do you get your inspiration from, and would you ever consider writing any songs about literary characters (hint hint!)?
Lyrically, my inspiration comes from everyday things that happen to me or people I know, (usually tied to romantic relationships!) or just general observations. That could be anything from a breakup to my dislike of the X Factor to the death of my dad as in The Fire. Anything I feel strongly enough about to write about I suppose! It’s hard for me to come up with lyrics to a song if I feel like I’m making stuff up. I just haven’t got the imagination!

Musically I write ALL the time. My phone has a recorder application and it’s absolutely full of music without lyrics! I’ll hear a chord change somewhere (could be and advert, TV show theme tune, anything!) and there’ll be something that I like in it and use it to come up with a sequence of chords. Then I come up with a melody – usually after a drink or two…

It always works that way round. Chords first, melody second, lyrics last! Obviously I have bands that I love and there’ll be certain songs that come out of other songs (shouldn’t say that really!) but every musician has musicians who influence them!

As for writing about literary characters, I think I might have to give that a go! I have thought about it but I imagine it’d be a lot harder than writing from experience! I feel a lot safer doing that!

You can find out more at www.tony-bengtsson.com – and check out The Fire on YouTube!