I featured my review of Tony Noland’s Blood Picnic and other stories anthology back on Tuesday and today is the EXCLUSIVE interview I did with him for the Blunt Pencil. Enjoy!

What made you first pick up a pen and write a story?
I wrote stories as a kid, but it was discouraged. In 2006, after years and years of writing journals and blog posts, I posted a bit of fiction to the blog I had at the time. A reader liked it and challenged me to do NaNoWriMo. I did, successfully. At 50K, it was the first large scale fiction project I’d ever done. After that, I thought, “I can do this.” Of course, only later did I realize that I’d written utter garbage and would have to improve my craft 10,000%, but by then it was too late – I was hooked.

You recently released your Blood Picnic anthology. What prompted your move into the world of self publishing?
I self published “Blood Picnic” for a few reasons. Firstly, while I’ve continued to do my weekly FridayFlash stories, I’ve been working on a novel. It’s been a bit of a slog, and I wanted to put a win on the board to keep my spirits up. Secondly, the novel isn’t done yet, not even close, but in the course of writing it, I have been keeping tabs on the publishing situation in general. Self publishing “Blood Picnic” gave me a chance to see what it takes to organize, edit, format (and re-format and re-re-format…), and market a book by myself. This whole thing was done as a learning exercise so I can make an informed decision about what publishing route to take with my novel(s). Thirdly, I’ve always wanted to do a book cover, and this gave me a chance to indulge my graphic arts side.

You have work in various published anthologies, as well as your own. What are your thoughts on the self-publishing boom compared to the traditional publishing paradigm?
It’s brought a tremendous freedom to writers and readers. In the past, print books with a limited run would be horrifically expensive. Now, e.books that reach out to niche markets can go for the same prices as other e.books. One concern that is coming to the fore is the issue of quality. I don’t mean the quality of the writing. Sturgeon’s Law is still in effect: 90% of self published books are crap, but 90% of everything is crap. There have been plenty of dreadful, schlocky, forgettable books published by traditional means, and some truly excellent ones published by indie presses and by self publishers. The key element that is missing from the self publishing boom is some indicator that the basic requirements of professionalism have been met: decent cover, spelling, grammar, margins, line and page breaks, etc. Recent concerns about spam books clogging Amazon may just be a taste of what’s to come. One possible example for a “seal of quality” is the Premium Catalog at Smashwords. Almost any book can be self published at Smashwords, but only a small subset meets the stricter requirements for the Premium Catalog. I was pleased that “Blood Picnic” made it in the Premium Catalog, not only because it broadened the distribution for the book, but because that’s a high hurdle to clear. It gave me confidence that the mechanicals were taken care of to professional standards.

Blood Picnic covers a range of genres – which would you say is your favourite to write?
I like writing literary fiction. Bloodthirsty demons and magic rings are fun to write about, but human emotions make the very best playthings.

Who would you consider to be your influences, either in terms of style or content?
P.G. Wodehouse made every word count, to great hilarious effect. Stephen King goes right up to the line of what’s acceptable then goes vaulting over it. Jane Austen hinted and suggested. Harry Turtledove starts with an idea and lets the story tell itself. C.S. Forester made his protagonist both sympathetic and infuriating. Isaac Asimov had galactic sweep and vision peppered with humor along the way. Charles Dickens made characters come alive through idiosyncrasies. David Brin knows that alien worlds are only as interesting as the aliens who live there. Richard Rhodes took the technical and made it personal.

Do you have a writing routine?
If I did, I’m sure I’d be more productive.

You also write posts for the Write Anything blog. Would you ever write a “how to” book?
Until I have more published – stories, poems, anthologies, novels – and have significant sales of same, I can’t see myself writing a how-to book. Right now I give my advice away for free. Before charging anyone for a compendium of my wit and wisdom, I would need to be sure that people had a reason to trust my judgment. 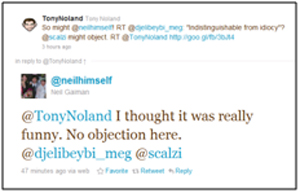 Tell us about how you came to the attention of Neil Gaiman.
In January 2011, I wrote a story titled “Where the Hell is Tony’s #FridayFlash?”, which starred Neil Gaiman. It was a funny piece featuring lots of famous writers and celebrities as massive fans of mine: John Scalzi, Wil Wheaton, Susan Orlean, Margaret Atwood, President Barack Obama, etc. They were all desperate to read my next story and were DMing Neil Gaiman, another huge Tony Noland fan, to find out if he knew anything. I wrote the story as a lark, just having wish-fulfillment fun with the idea of these leading figures as uber-fanboi of The Great Tony Noland. Via twitter, the story came to the attention of Neil, with the suggestion that he might take issue with his name and inner thoughts being used so freely. Neil tweeted me to say, “I thought it was really funny. No objections here.” As you can imagine, I was pleased that a) he liked it and b) he didn’t see the need to sue me. 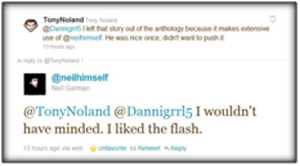 Later, when I was discussing “Blood Picnic” with someone on twitter, I was asked why “Where the Hell…” wasn’t included, since it was one of this reader’s favorites. I noted that it made extensive use of Neil; while he was nice about it all, I didn’t want to push it. He tweeted me again to say, “I wouldn’t have minded. I liked the flash.” (Let me go on record here to say that I want to be as cool as Neil Gaiman when I grow up.) I get a little lift whenever I think of these interactions. Writers go through periods of wondering just how sucky their work is. These serve as a useful benchmark for me, to remind me that people who know good writing from bad can read my work and like it. As it happens, there are other reasons that story wasn’t really right for “Blood Picnic”, and might be tricky to fit into any anthology. Regardless, “Where the Hell…” has a special place in my heart.

What are your three favourite words?
Syzygy, gravitas and yttrium.

Wildcard question – if you were Dr Sam Beckett, which contemporary figure’s life would you want to quantum leap into?
President Barack Obama. There is so very, very much more going on behind the scenes that the public doesn’t get to see. All of it is so important and impactful, I would love to get an inside look at it all. Of course, given the way Sam Beckett fumbled his way through those Leaps, I’d probably start a war.

Book info
Blood Picnic and other stories is a mixture of fantasy, horror and literary fiction, priced at $2.99. It’s available for many formats at Smashwords, and in device-specific formats at Amazon, Amazon-UK, Amazon-DE, Barnes & Noble, Sony, Kobo, Diesel Books, and other outlets.

Author info
Tony Noland is a writer, blogger and poet in the suburbs of Philadelphia, PA. He’s active on Twitter as @TonyNoland. Tony’s writing and fiction blog is http://www.TonyNoland.com.